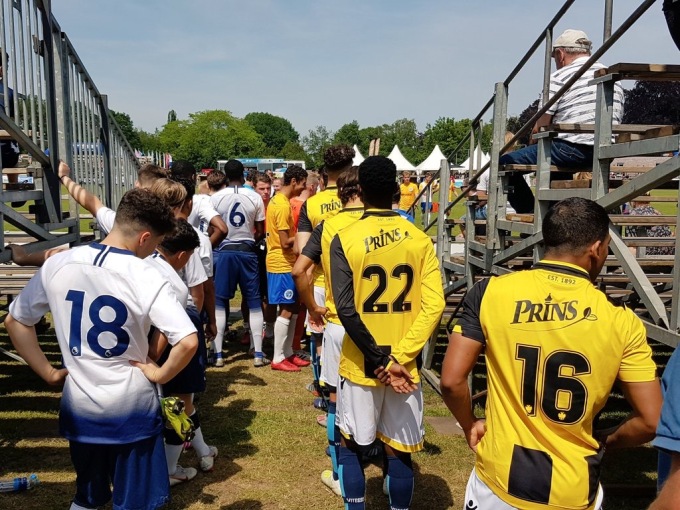 Our under 19’s final group game of the Terborg tournament turned out to be somewhat of a thriller. Wayne Burnett’s side knew that they only needed a point to book their place in tomorrow’s semifinals going into Saturdays game. And it looked as if Spurs would comfortably achieve their aim such was their strangle hold on the game. A dramatic end to end encounter with chances aplenty at both ends of the pitch, Spurs were the better team for large periods of Saturdays match against the Dutch club. And after they took the lead through Dilan Markanday in the second half it seemed as if they would coast to victory. However, Vitesse responded not once but twice and Spurs wouldn’t have qualified for the semifinals but for a fabulous late free kick from substitute Harvey White to level up the scores once again. Wayne Burnett’s side lined up in a 4-2-3-1 formation as Kacper Kurlyowicz started in goal while a back four of Jubril Okedina, Jonathan Dinzeyi, Luis Binks and Dennis Cirkin lined up in front of him. Jamie Bowden and Armando Shashoua started in central midfield while Dilan Markanday and Phoenix Patterson started either side of CAM Rafferty Pedder who was behind makeshift centre forward and captain Jack Roles. Vitesse got the game underway and it was the Dutch club who managed the first goal attempt of the game after number 14 forced a save out of Kurylowicz with a powerful low effort from long range. A free kick which was taken by Phoenix Patterson at the other end, was headed away by a Vitesse defender to Jack Roles inside their penalty area however, the Spurs man fired the ball over the crossbar on the turn. Spurs had a penalty shout waived away soon afterwards when Dilan Markanday’s cross appeared to be handled by number 22 inside the Vitesse penalty area. The lively start to the game continued and Kacper Kurylowicz was on hand to save 22’s dipping header after he connected with 14’s corner. Jonathan Dinzeyi then managed to block a shot from Vitesse’s number nine on the edge of the Spurs box. Spurs then attacked down the other end of the pitch through Markanday who managed to win a free kick out on the right flank. Markanday stepped up to take the resulting free kick, he whipped the ball into the oppositions penalty area where it was met by Binks who rose high to meet the ball however, his header took a deflection off a Vitesse defender before it was gathered by their goalkeeper.

Vitesse Arnhem responded through their number 16 who was allowed to dribble his way into the Tottenham penalty area before testing Kurylowicz with a curling effort which the Polish youth international saved. Their number five then fired an effort narrowly over Kurylowicz’s crossbar from long range. Spurs had one last chance before the referee blew his whistle for halftime, that came from a Phoenix Patterson corner kick however, it was volleyed over the goal by defender Jonathan Dinzeyi. Spurs made a change early on in the second half when they brought on Kion Etete for Rafferty Pedder as Spurs looked for a focal point up top. Jack Roles was adamant that number 22 had handled his pass which was intended for Kion Etete inside the Vitesse penalty area but the referee waived away Roles’ protests. Spurs took the lead shortly afterwards. A lovely passing move ended with the lively Shashoua passing the ball out to Patterson on the left wing. Patterson whipped in a cross into the Vitesse penalty area which Markanday was able to volley into the middle of the goal, 1-0. Phoenix Patterson made way for Rayan Clarke a couple of minutes later as Spurs looked to regroup. However, Spurs were unable to hold onto their lead and less than five minutes after scoring the young Lilywhites conceded. A teasing whipped free kick from number 22 was only partly cleared by Jonathan Dinzeyi and the ball came down to number eight inside the Spurs box and his powerfully struck effort deflected off of Dinzeyi before beating De Bie and going into the back of the net, 1-1. Then shortly after the restart things got even worse for Wayne Burnett’s side as Vitesse took the lead from a corner kick. Number 11’s corner kick wasn’t dealt with and it came to number 22 at the back post and he was able to just guide his header past Kurylowicz and into the top left hand corner of the goal, 1-2. A shellshocked Spurs side tried to respond. Jack Roles fired an effort over the Vitesse goal on the half volley as Spurs started to throw bodies forward. Dennis Cirkin was shown a yellow card shortly afterwards for pulling back a Vitesse player and he was duly replaced by Harvey White a matter of moments later. Kion Etete got a header wrong after he connected with a Jamie Bowden free kick and the Vitesse goalkeeper was able to safely gather the ball.

Number 11 fired an effort narrowly over Kurylowicz’s crossbar after he galloped forward down the right wing. Jamie Bowden then had a low shot blocked by number 17 as the clock ticked down. Then during the final moments of the game Dilan Markanday won a free kick after he was fouled out on the right flank. The newly introduced Harvey White stood up to curl a beautiful effort past everybody in the box and into the top left hand corner of the goal sparking jubilant celebrations from the Spurs players, 2-2. Jamie Bowden was shown a yellow card for a foul on number eight before Luis Binks cleared a late cross from number 22 as Spurs held on to book their place in tomorrow’s semi final against FC Midtjylland.

My man of the match: A thorn in Vitesse’s side throughout today’s encounter, the tigerish midfielder had an excellent game for Wayne Burnett’s side. Shashoua was a real live wire in central midfield, constantly popping up all over the place (particularly down the left flank) and initiating chances for Spurs. Shashoua won a lot of balls and created a lot of chances for his teammates. The 18 year old was also involved in Dilan Markanday’s opening goal and his weight of pass on the day was glorious. t was a very intelligent performance from a very intelligent young player!