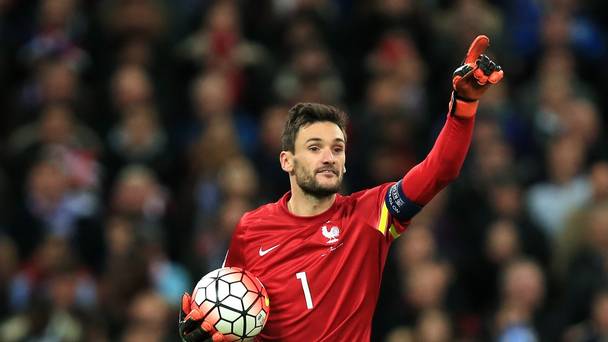 Both Spurs players Hugo Lloris and Clinton Njie faced each other in this evenings international friendly between France and Cameroon. France won the thrilling match 3-2 and Lloris played the full 90 minutes as he lead his side out as captain in Paris. Whilst Our Cameroonian forward Clinton Njie came on in the 70th minute of the game, tomorrow could see our defender Kevin Wimmer play against Malta in an international friendly which kicks off at 7:30pm. 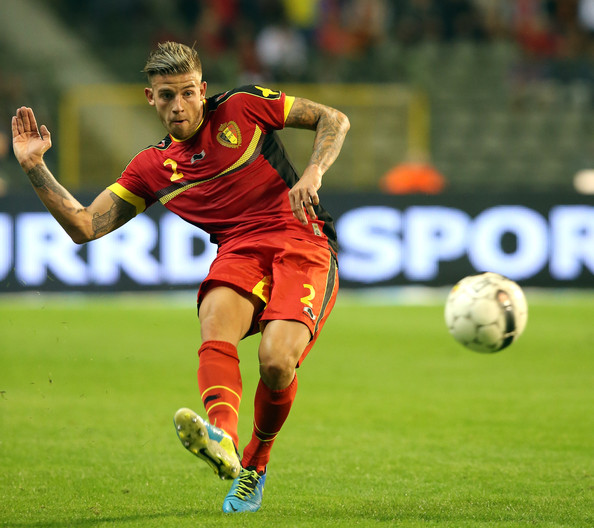 Friday: Only one of our five England internationals played in Friday nights 2-1 victory over Australia. Eric Dier came on in the 73rd minute as he played at centre back however, the 22 year old unfortunately scored an own goal at the stadium of light. Dele Alli, Harry Kane, Danny Rose and Kyle Walker were all unused substitutes, having played in England’s friendly against Turkey last week.

Saturday: Erik Lamela: Erik Lamela’s fine form for Spurs over the course of the season saw him rewarded with a start for Argentina in their international friendly against Honduras on Saturday. Lamela completed 64 minutes of the match as he played in the midfield three in the centre of park. The match finished 1-0 to Argentina.

Mousa Dembele,Toby Alderweireld and Jan Vertonghen: Our central defender Toby Alderweireld played the whole of Belgium’s friendly against Switzerland on Saturday, with the defender playing in the central of defence as the Belgians won 2-1. In addition Jan Vertonghen also completed the whole of the match as he played at left back. Whilst Mousa Dembele completed 55 minutes of the match in the midfield.

DeAndre Yedlin: DeAndre Yedlin came on in the 46th minute in The USA’s 4-0 victory over Bolivia in an international friendly earlier today. Yedlin completed the second half at right back as he helped the US record a clean sheet.

DeAndre Yedlin: Our right back DeAndre Yedlin played the full 90 minutes of the USA’s friendly against Ecuador earlier today. Yedlin helped the US to a clean sheet as they defeated Ecuador 1-0, and the young right back impressed yet again as he caught the eye with his skill and pace down the right flank. The USA face Bolivia in another international friendly on Sunday. Whilst Harry Kane, Dele Alli, Eric Dier, Kyle Walker and Danny Rose could all play in tomorrow’s friendly for England as they face Australia at the stadium of light, you can watch the match on ITV1 at 7:45pm tommorow. 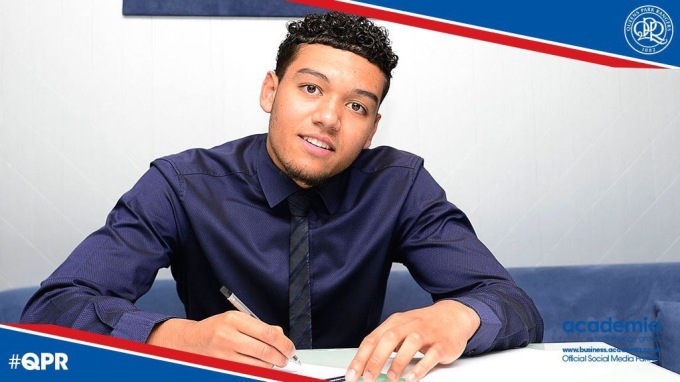 Our young under 18 right back Christopher Paul joined fellow London club QPR today after the Northern Ireland youth internationals scholarship at Spurs came to an end, Paul had been on trial with the west London club earlier in the season. Paul started out as a midfielder at Spurs and joined the Lillywhites as an under 9. However, he played as a right back throughout the 2014/15 season. We wish him all the best at his new club. 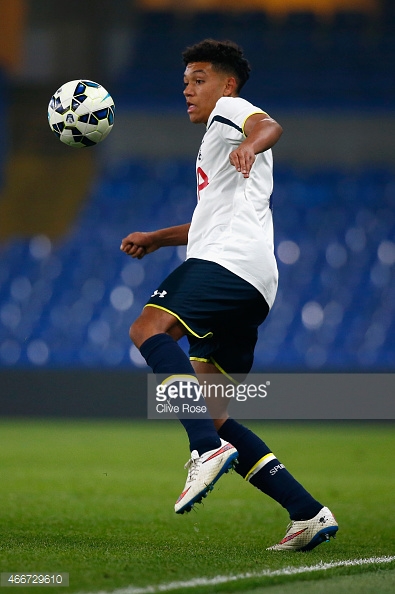 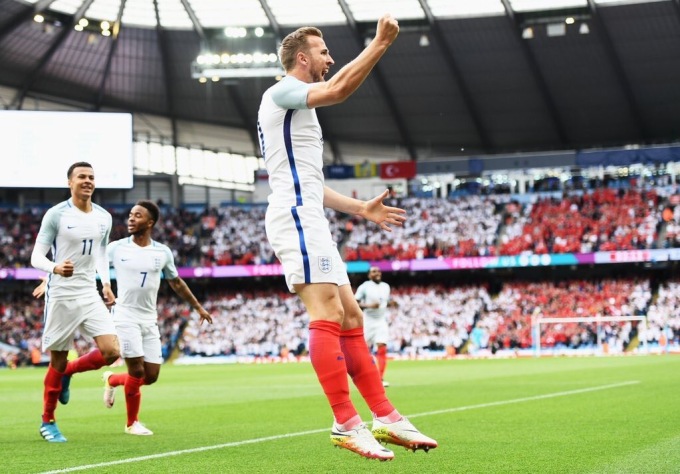 Kyle Walker, Danny Rose, Eric Dier, Dele Alli and Harry Kane: All five of Spurs’s England players played the full match as the three lions defeated Turkey 2-1 in an international friendly at the Etihad stadium. Danny Rose was awarded the England man of the match by Vauxhall after the left back put in yet another outstanding display at full back. Kyle Walker had a fine match on the opposite flank with the Spurs player making an exceptional block early on, Walker also impressed throughout. Eric Dier provided the England side with a solid and composed presence deep in midfield as he looked impressive throughout in the centre of the park. Whilst Dele Alii marked his comeback from suspension by providing an assist for Spurs striker Harry Kane in a game where both team mates were very good on the field. Alli’s movement and skill on the pitch provided plenty of problems for Turkey, where as Kane was also extremely potent in attack and the golden boot winner converted an early chance created by Alli. However, Kane was denied a brace in the second half, after the Englishman missed a penalty. Overall a fantastic night for the Spurs lads in the English jersey England face Australia in a friendly next Friday at the stadium of light.

DeAndre Yedlin: DeAndre Yedlin played the full 90 minutes for the US national side as they defeated Puerto Rico 3-1 in an international friendly this evening. Yedlin impressed throughout at right back for the USA as he continues his fine form after his recent loan spell at Sunderland ended. Up next for the USA is a friendly against Ecuador on Thursday. 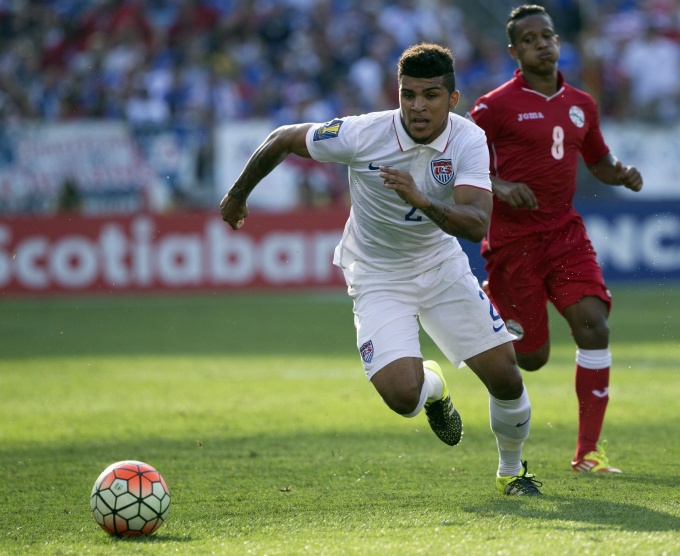 A spectacular and unpredictable season: (Spurs 2015/16) 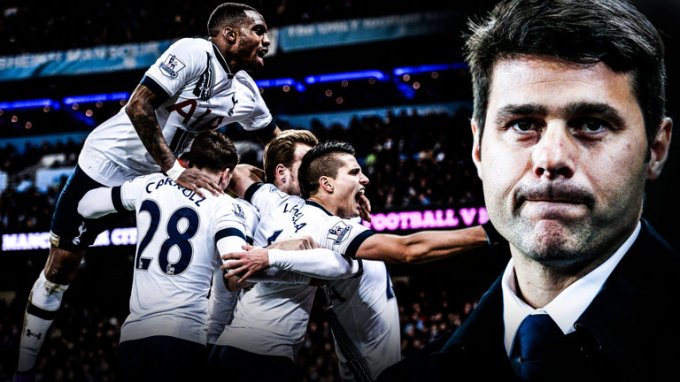 We only needed a point last Sunday to secure second spot, as we took on Newcastle at St James’ Park. However, Pochettino’s men went off the boil and were stunned by the Toon as they thrashed us 5-1, meaning yet another St Totteringham’s day for all involved with Spurs. However, we did finish in a highly impressive third place wich was our highest finish in many years and Mauricio Pochettino’s lads in doing so have qualified for the group stages of next seasons UEFA champions league, a feat which at the start of season was barely imaginable from fans, journalists and pundits. No one can deny that what Pochettino and his players have achieved over the course of the season, was a spectacular achievement. The Argentine manager implemented the perfect style of play to suit Spurs’s game, he once again made the players a remarkably fit side, and most importantly he got us winning big matches and with a great flourish. Although, undoubtedly some will be left wondering how we didn’t catch Leicester in February and how we didn’t take our chance in one of the most open title races in a generation. 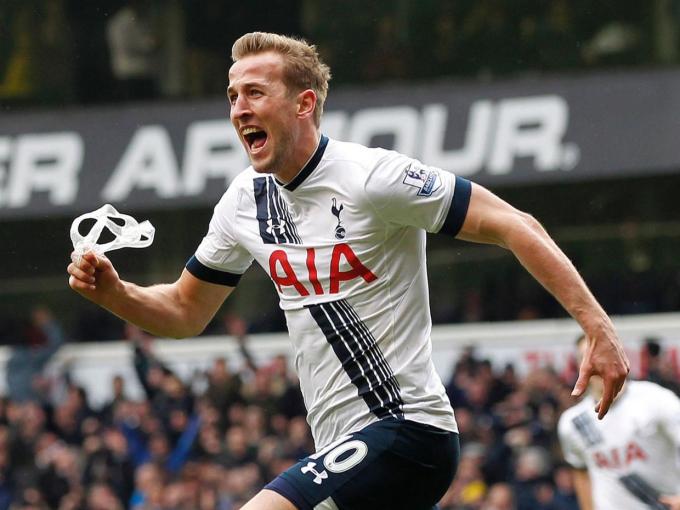 However, the vast majority of Spurs fans are extremely proud of what their club has achieved and they know Pochettino’s plan will become brighter and greater as the seasons progress. Let’s not forget, we played some remarkable matches this season, they done the double over Manchester city, they thrashed Manchester United, Stoke and West Ham, and remained unbeaten against arch rivals Arsenal and Chelsea in the league. We also finished the league campaign with the fewest goals conceded which was a remarkable achievement considering our poor defensive record the previous season. However, in my eyes one of the greatest things I saw this season were the exceptional team performances from our players and it didn’t go unnoticed, as Harry Kane, Dele Alli, Toby Alderweireld and Danny Rose were all named in the PFA team of the season. Harry Kane also finished the season as the top scorer in the league and the Spurs star attained the golden boot for his triumphs. Furthermore, all of our players showed pride, quality, hard work and an unquestionable passion for the club in which they play for.

Ultimately and imperatively, we must forget of the disappointing blip at the end of the season and we should instead remind ourselves of the glorious football that has been shown this season from our club. Our wonderful and youthful side will continue to grow next season and in doing so will become an even greater force to reckon with, both domestically and in European competition. The new season cannot come quickly enough for myself, for I believe it will be a great and memorable occasion! Thank you Spurs for a fantastically memorable season and we’ll see you again next season! COYS⚽️ 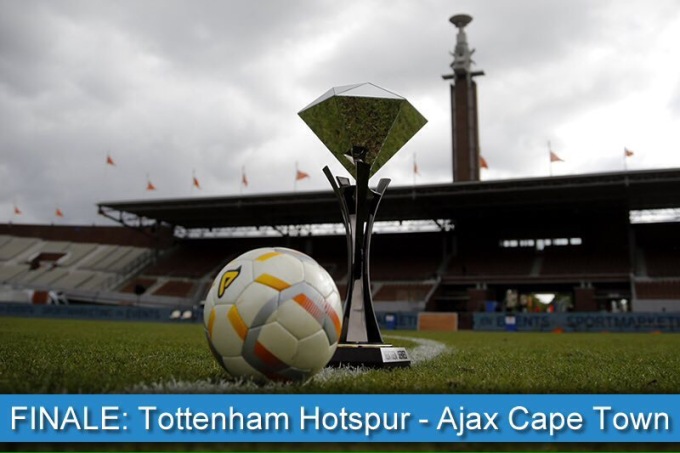 Our under 19’s lost in the final of the NextGen series tournament this afternoon after Kieran McKenna’s side lost 2-0 to the South African club Ajax Cape Town. The first half didn’t see many chances in either end as both sides showed great defensive tenacity as they stopped any attacking moves from each other, the first real chance of the match came shortly after the beginning of the second half. After Kazaiah Sterling’s effort from within the box darted narrowly wide of the left post. However, immediately afterwards the South African side took the lead after their forward Thethani was found via a goal kick and the youngster who was through on goal expertly lobbed Whiteman in the Spurs net to give them the lead. A little over five minutes later Ajax Cape Town doubled their advantage in similar fashion to their first, after a long searching ball found Thethani on the edge of the box and he dinked the ball over the head of the racing Whiteman to double the Cape Town clubs lead. It finished 2-0 to the urban warriors as the young Lillywhites narrowly missed out on the trophy. However this young Spurs side should be proud of their achievements in this competition and it was a great feat getting to the final as they defeated some top clubs on their way. COYS⚽️

Young Spurs forward Marcus Edwards won a most valuable player award, after the young Spurs starlet had an excellent tournament.

Spurs under 19’s marched into the final of the NextGen series this morning, after Kieran McKenna’s side defeated a talented Ajax team 1-0 at the Olympic stadium in Amsterdam. Will Miller scored the winner for Spurs after being found on the edge of the box by Harrison, Miller slotted the ball into the bottom right hand corner of the net to give the Lillywhites the lead. It was game in which the Spurs players impressed throughout as they caused the Dutch side a whole of host of problems on the pitch. Young goalkeeper Alfie Whiteman had a remarkable game in the Spurs nets and he made a spectacular reflex save to deny a thumping Ajax shot. Whiteman also made a fine save earlier on to deny the Amsterdam club. We play the South African side Ajax Cape Town in the final of the tournament today at 3:35 pm and you can watch the match live by clicking on the below link. COYS 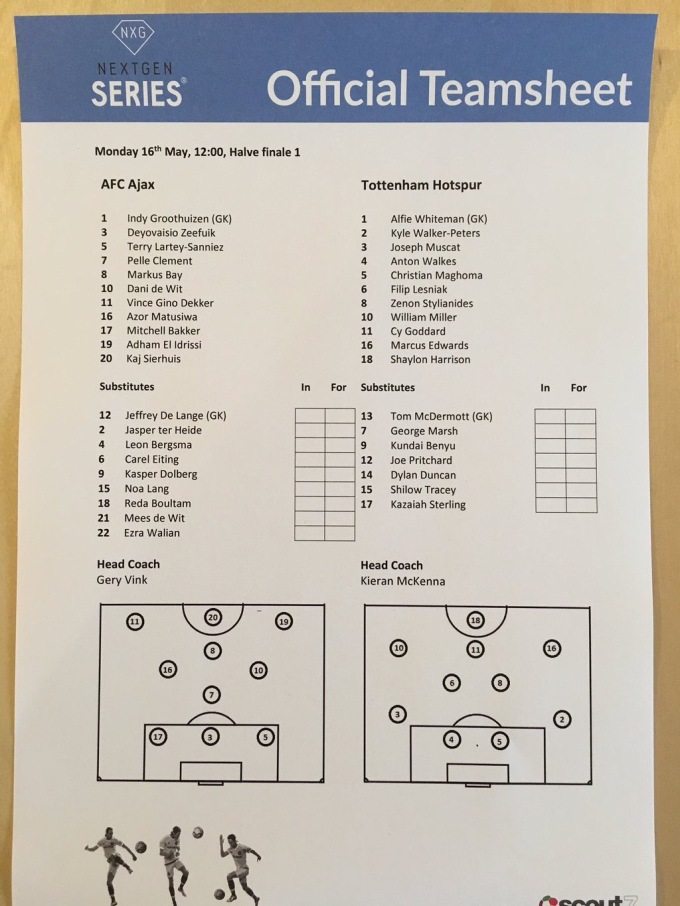 You can also watch the full match from today’s earlier victory over Ajax by clicking on the below link. 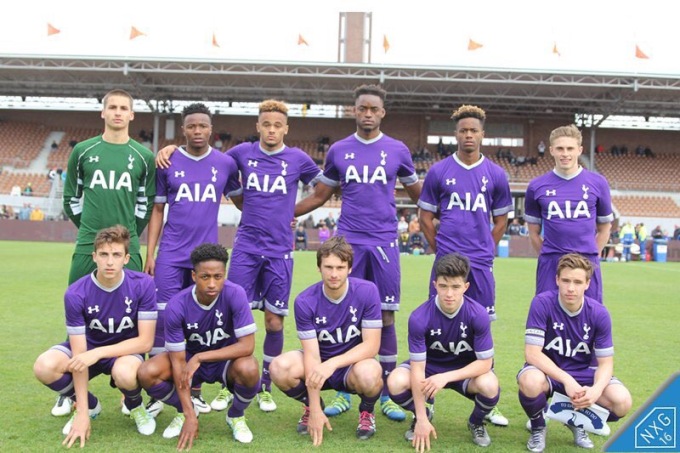 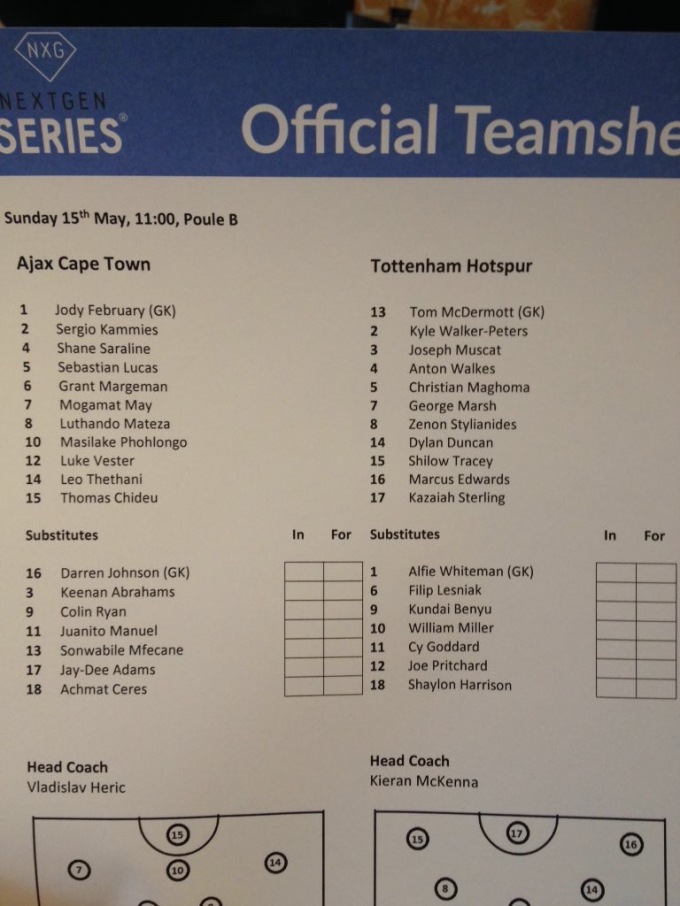 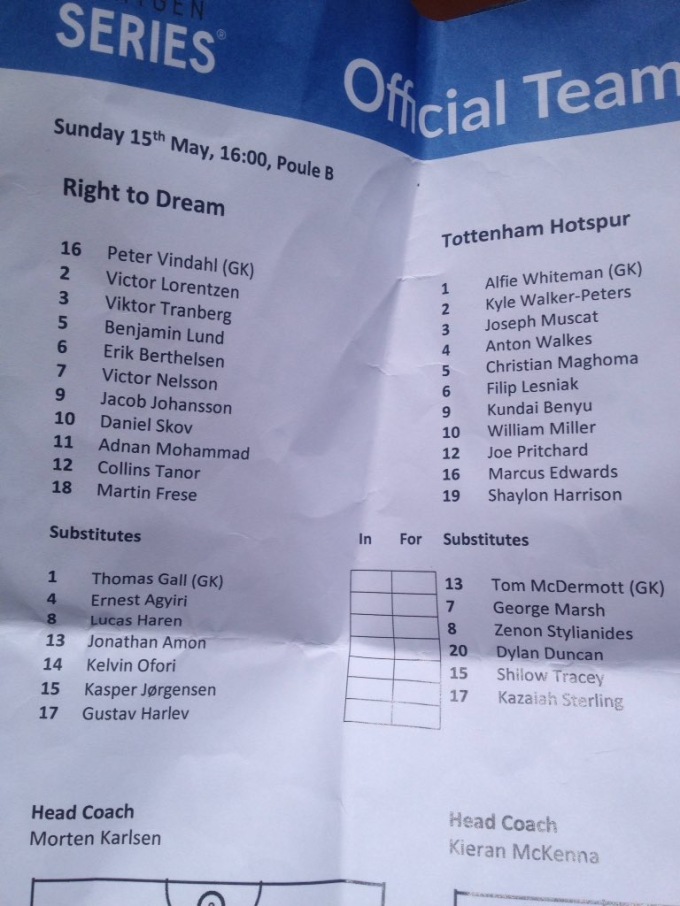 Spurs u19 v Right to Dream: John McDermott’s side followed up this mornings defeat with an impressive 2-0 victory over the 2015 Milk cup winners Right to Dream. Filip Lesniak opened Spurs’s account  in the second half, after the Slovakian hit a powerful shot from outside the box which hit the back of the net leaving the  goalkeeper helpless. Spurs doubled their lead late on after Shayon Harrison scored with a smart finish beyond the goalkeeper after being played through by Marcus Edwards. Spurs now progress to the semi final of the competition where they’ll meet Ajax at 11 am English time. COYS⚽️

You can rewatch today’s game on the link provided below. 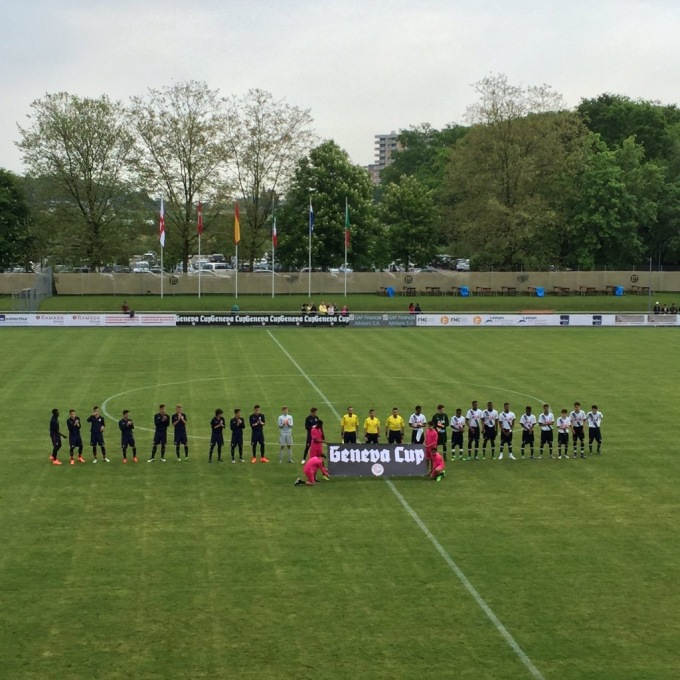 Under 16:’s our under 16’s are currently competing in the two day Geneva cup in Switzerland and the young Lillywhites were involved in two matches this morning with them drawing the first game against a talented Atlético Madrid side 0-0. Whilst they lost the second match 2-1 against Swiss side Servette. However the under 16’s were triumphant in their final match of the day as they defeated Meyrin FC  5-1.

Next Gen U19 tournament: An under 19 Spurs side played their first match of the tournament winning 1-0 against PSV in the Olympic stadium this afternoon. Joe Pritchard netted the only goal of the game after being assisted by Will Miller, in a game in which Spurs dominated. Next up for Spurs is Ajax Cape Town at ten o’clock tomorrow morning as Spurs will look to be continuing their fine start to the tournament with a victory over the South African side. You can view the whole of today’s match in the link provided below. COYS⚽️ 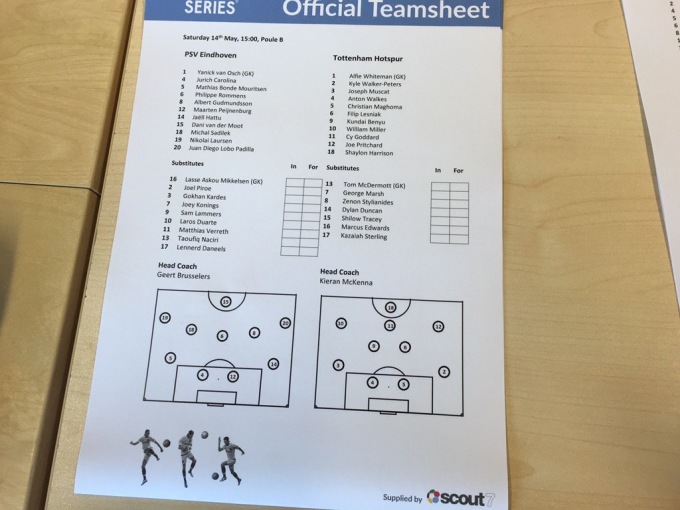