Spurs’ development squad to compete in next seasons Checkatrade Trophy:

The EFL announced the list of teams competing in the coming Checkatrade Trophy for the 2017/18 season, and its big news for our academy. Our under 23’s side are one of the invited premier league clubs that will take part in next seasons competition. We refused our chance to compete in the competition during the last campaign, with international fixtures clashing with the competition putting major clubs off, but the EFL have made sure the dates won’t clash this time round. The news comes just a day after Spurs appointed their new under 23’s head coach, former Dagenham and Redbridge manager Wayne Burnett who takes charge of our development squad. Whilst former goalkeeper Perry Suckling returns to our academy set up, as an academy goalkeeping coach from championship side QPR. Head of coaching and player development John McDermott had the following to say on accepting our invitation to the competition: “We took the decision to enter the competition as it is beneficial for the Development Squad’s scheduling this year. We know the EFL Trophy will provide a massive challenge for us and we look forward to testing ourselves.” The competition which starts on the week commencing the 28th of August will be a phenomenal experience for our youngsters, coming up against senior players in a competitive game will provide our development squad with an invaluable opportunity.

I for one am absolutely delighted that we have taken the decision to take part in the competition, we will be drawn into a group of four (in the southern section) with the draw scheduled for next month. We could be drawn with anyone from Charlton Athletic to Plymouth Argyle, with all group games being held away from home. This is a precious opportunity for our under 23’s to challenge themselves against tough senior opposition and I’m sure Wayne Burnett’s side will rise to the challenge. I am pleased to announce that I will be reporting from all three group stage games, and I very much look forward to the competition beginning. COYS

Five Spurs youngsters that could make their senior debut during the 2017/18 season: 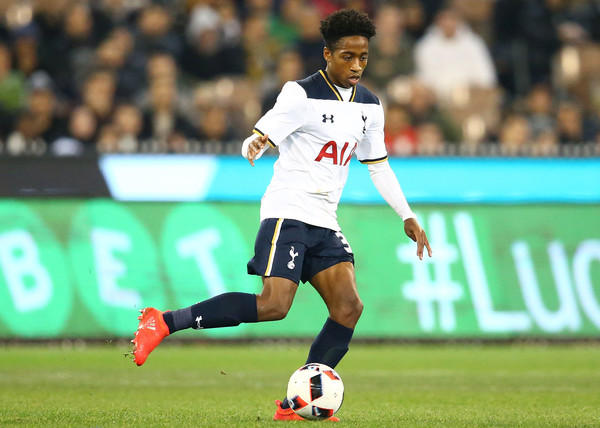 With pre season fast approaching, there’s no better time then now for me to compile a list of five of our talented academy players, who could make their senior debuts for Spurs during the 2017/18 campaign. The following players included are only those who have not been involved in a competitive game in Pochettino’s side hence, the absence of the highly rated Marcus Edwards who made his debut in last seasons league cup tie against Gillingham. With so many talented youngsters on our books it would be impossible for me to include all of those that could feature next season, so I have listed the five who I believe have the best chance of playing for our senior side during the upcoming campaign.

1. Kyle Walker-Peters: 20 year old full back Kyle Walker-Peters will be a very familiar name amongst the Spurs faithful. The right back who was part of England under 20’s recent World Cup triumph in South Korea, is in my opinion one of England’s best defensive prospects. The Edmonton born right back who’s praises I have sung highly over the past couple of seasons, is a dynamic player who can operate on either flank at wing back. Pacy, determined and incredibly skilful, Walker-Peters has all the raw attributes of a successful Pochettino player. Whilst I was surprised that Walker-Peters didn’t make his debut last season, he has already featured for Spurs in a couple of friendlies. He has also been named on the bench on a couple of occasions during competitive games for Spurs. With Kyle Walker’s immediate future uncertain, I’d be very surprised if next season was not Walker-Peters breakthrough season at he’s boyhood club. After already being promoted to train with the senior squad on a permanent basis last season, the young right back is without a doubt the most likeliest Spurs youngster to debut in the 2017/18 campaign. An article I wrote on Walker-Peters last season: https://superhotspur.com/2016/10/17/2241/

2. Samuel Shashoua: Another familiar name among Spurs fans is 18 year old forward Samuel Shashoua. Shashoua who was named on the bench for spurs’ penultimate league game of last season is an England youth international and was one of the standout performers for the under 18’s during last seasons successful campaign. With 15 goals and 11 assists, the West London born winger shone for John McDermott’s side, and was one of the key players behind their successful FA Youth cup run which saw them reach the semifinals of the prestigious youth competition. A creative force, Shashoua has the ability to change the complexion of a game, with his razor sharp creativity, skill and understanding of the game, he showed throughout the season what a phenomenal talent he is. Whilst next season will be about establishing himself in the under 23’s side for which he has only featured on a handful of occasions, his chances of playing for the first team are by no means far fetched. With an excellent work ethic and attitude, I could see him being involved in one of the early rounds of the domestic cup competitions. You can read my article on Shashoua here: https://superhotspur.com/2017/01/19/samuel-shashoua-a-bright-future/

3. Luke Amos: The box to box midfielder who turns 21 next February spent the second half of last season on loan with league one outfit Southend United. Whilst his appearances for the Seasiders were few and far between, Amos gained vital experience and impressed boss Phil Brown. A tenacious and promising youngster, Amos has previously represented England at youth team level, a mainstay in the development squad over the past couple of seasons I have seen Amos put in some really impressive performances in the midfield. Whilst I wouldn’t be surprised to see him head out on loan again next season, I feel as if Lesniak’s departure will boost the chances of the tidy midfielder making the first team fold. Amos has previously played for Spurs in a handful of friendlies, with the most recent of which coming last May in Hong Kong.

4. Kazaiah Sterling: The powerful 19 year old striker Kazaiah Sterling was a player that impressed over the course of last season. Despite missing an early part of the season through injury, Sterling scored on 12 occasions for the under 18’s and on two occasions for the under 23’s. His fine form saw him earn a place in the post season friendly match in Hong Kong, with the striker making a dream debut after scoring on his debut. A player who Pochettino has spoken highly about in the past, the former Leyton Orient man is one of our best striking prospects. Instinctive and clinical Sterling could do more than challenge for a place on the bench over the coming season.

5. Nick Tsaroulla: The speedy left back had a massive impact on our under 18’s side during the 2016/17 season. A player in the mould of Danny Rose, Tsaroulla had an excellent season last term putting in a string of sensational performances at full back. The Bristol born flying full back fits right into our style of play, rapid over 10 metres Tsaroulla possesses great close ball control and agility. He’s not just impressive going forward, he is also talented defensively and is not afraid of making a lunging challenge. Whilst it is quite unlikely that Tsaroulla will feature over Rose or Davies next season, if an injury crisis were to come about then I’m sure Tsaroulla would find himself in the first team fold.

Cambridge United pre season match: Our under 23’s first public game of next season comes next month in Cambridge as we take on Cambridge United in a testimonial match for the league two sides Josh Coulson on July 21st. The friendly game which takes place at the Abbey stadium, will provide our development squad with an important test against an established league 2 side, it could also come in useful if we go on to appear in next seasons Checkatrade trophy, an announcement on that should be made public in the coming weeks by the EFL. I will be reporting on our pre season friendly from the Abbey stadium next month. COYS

On Friday Spurs published the list of players that would be leaving the Lillywhites upon the expiration of their contract at the end of the month, as well as those that had been offered new deals. Six of our academy players were included on that list, Filip Lesniak, Tom McDermott, Zenon Stylianides, Charlie Owens, Joe Muscatt and Juan Pablo Gonzalez-Velasco have all been released from the club. All players of which I have watched play on numerous occasions for Spurs over the past few seasons, it is sad to see their time at Spurs come to an end, below is a short piece on each player.

Filip Lesniak: Having only made his Spurs senior debut back at the end of last season, the 21 year old midfield anchor mans inclusion on the released list comes of much surprise to many Spurs fans. The Slovakian youth international joined Spurs’ youth academy from Kosice in 2012. A talented player, just the other month I wrote an article on him and I was really hoping that he’d get another season with us. I would expect Lesniak to have another club lined up following his departure from Spurs, and there’ll be no shortage of admirers. A recent article I wrote on Lesniak: https://superhotspur.com/2017/05/19/a-piece-on-spurs-debutant-filip-lesniak/

Tom McDermott: The 19 year old goalkeeper who was signed from Warrenpoint (in Northern Ireland) back in 2014, didn’t make a single competitive appearance for our under 23’s during the 2016/17 season and his release doesn’t come as much of a surprise to me. Although a talented goalkeeper, McDermott’s was unlucky in his time at Spurs, in the fact that there were so many other talented goalkeepers vying for places in the youth sides.

Zenon Stylianides: Another played who i have always liked, the central midfielder was one of six players to be released by Spurs on Friday. Stylianides had been at Spurs for many years, and was always a player I rated highly since first seeing him as an under 18. Stylianides featured 14 times for our under 23 side during last season.

Charlie Owens: Owens joined championship side QPR last month so his release was already expected, the Northern Ireland youth international who primarily operates as a midfielder joins a group of ex Spurs youngsters currently with the west London club. https://superhotspur.com/2017/05/27/former-spurs-youngster-charlie-owens-signs-for-qpr/

Joe Muscatt: Another player to leave Spurs following the expiration of his contract, Muscatt is a two footed full back who can operate on either side, he featured 16 times for our development squad last season.

Juan Pablo Gonzalez-Velasco: The only under 18 player to be released, Velasco only joined our academy set up last summer from Brentford following the closure of their academy. The winger who has represented Colombia at youth level, only played on 8 occasions for our under 18’s during the season. I wish all of our released players the very best of luck for the future.