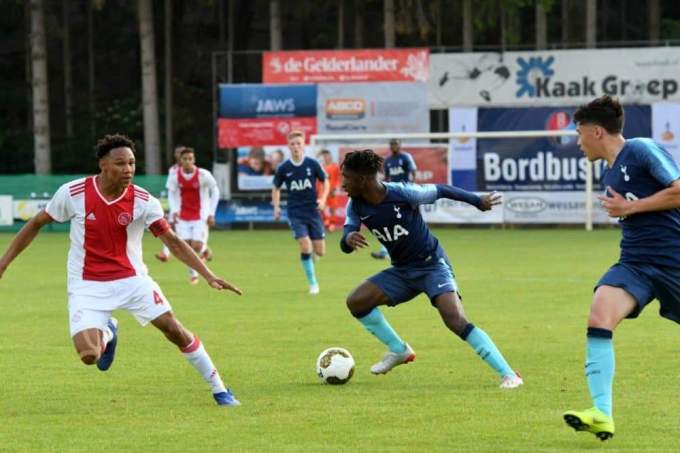 Our under 19’s second group game of this years Terborg tournament was against Brazilian club Flamengo who, like Spurs had won their opening group game on day one of the tournament. Wayne Burnett’s side battled hard once again on Saturday morning in what was a tightly fought affair. Flamengo were defensively solid however, they were dangerous on the break and the young Lilywhites had goalkeeper Jonathan De Bie to thank on more than one occasion. Spurs on the other hand were solid but they were a bit off the pace at times in the game, unlike when they played Ajax Cape Town yesterday. In the end Spurs and Flamengo had to settle for a goalless draw meaning that it is all to play for in their final group games later today. I must apologise in advance for referring to the Flamengo players by their numbers as I was unable to get hold of a team sheet. Wayne Burnett’s side lined up in a 4-2-3-1 formation on Saturday as Jonathan De Bie started in goal, while a back four of Jubril Okedina, Brooklyn Lyons-Foster, Luis Binks and Dennis Cirkin lined up in front of him. Harvey White and captain Jamie Bowden anchored the midfield whilst Rayan Clarke and J’Neil Bennett operated out on the flanks, either side of CAM Rodel Richards who played behind striker Kion Etete. Flamengo got the game underway and early on in the game their number seven went on a good run down the right flank, beating Dennis Cirkin before attempting to square the ball for number nine inside the Spurs box however, Jubril Okedina was on hand to clear it. Jonathan De Bie then did well to palm away a cross from Flamengo’s number two before number eight shot wide from long range. A couple of moments later De Bie was on hand to claim number sixes free kick as the pressure intensified from the Brazilians. After coming inside from the left flank Flamengo’s number eight fired an effort wide of De Bie’s goal. Spurs were just knocking the ball about as they looked to respond to Flamengo’s early attacking onslaught. After going on a surging run down the left flank J’Neil Bennett came inside onto his right foot before having a pop on goal but it was blocked by number three. At the other end of the pitch Jamie Bowden was able to block a shot from number 11. During the opening stages of the game imperious Tottenham centre back Luis Binks had made a number of important interceptions and him and Lyons-Foster were doing a good job at snuffing out danger.

A corner which was delivered by number six and flicked on by two resulted in number four coming close to taking the lead from an overhead kick, but his effort flew narrowly over De Bie’s crossbar. Luis Binks then did well to cut out number fives through ball which had been intended for number nine. Unfortunately an injury picked up by J’Neil Bennett early on in the game meant that he had to leave the field, he was replaced by Dilan Markanday as Rayan Clarke switched flanks shortly before the referee sounded his whistle for halftime. Spurs got the second half underway but once again it was Flamengo who threatened first. 11’s through ball would have set number ten racing through on goal but for a timely interception from Jubril Okedina who came across his man to get to the ball. At the other end of the pitch Dilan Markanday won a free kick out on the right flank. Harvey White’s delivery was headed over the bar by Kion Etete. Lyons-Foster blocked a shot from number nine inside the Spurs box before a defence splitting pass from number eight caused problems for Spurs. The ball ran past Luis Binks who was back defending for Spurs and onto number 11 who raced into the Spurs box before pulling the trigger. However, his powerful effort was superbly touched over the crossbar by the alert De Bie. Number six then fired an effort wide from over 20 yards out before Luis Binks headed over from a Harvey White free kick. After beating Dennis Cirkin for pace down the right hand side, Flamengo’s dangerous number seven cut inside onto his left foot before firing an effort at goal. De Bie parried his powerful effort before smothering the loose ball before seven could get to it again. Spurs tried to respond, Jamie Bowden had an effort blocked by a Flamengo defender on the edge of their penalty area. Burnett introduced some fresh legs by bringing on yesterday’s goal scorer Phoenix Patterson for Rayan Clarke. There was a bit of a skirmish between both sets of players shortly afterwards, after Flamengo’s number nine left his boot in on De Bie while attempting to get to the ball. Luis Binks got involved in the skirmish for Spurs and he ended up being hit in the face by number nine who was waving his arms about. Somehow the referees verdict was to give both him and Binks yellow cards.

Harvey White was replaced by Armando Shashoua for the remaining minutes of the game. After going on a mazy forward run Dilan Markanday eventually had a shot blocked by number three on the edge of the Flamengo penalty area as both sides started to ramp up the pressure. Spurs had a scare after number nine was allowed to run freely down the right flank before cutting inside and testing De Bie with a stinging effort on goal. De Bie parried the ball and number 11 ended up firing over on the follow up much to the Belgians relief. Spurs attacked straight down the other end and after Shashoua won a free kick, Patterson tested the Flamengo goalkeeper with a powerful low effort on goal. A couple of minutes later Patterson received a pass from Jamie Bowden on the edge of the Flamengo box. However, his resulting effort on goal was blocked by a defender and Rodel Richards’ resulting effort was also blocked by a Flamengo defender. Flamengo had a late penalty shout waived away by the referee after number twos cross struck the arm of Dennis Cirkin inside the Spurs box. Luis Binks cleared behind a cross from the same player a matter of moments later as Burnett prepared one last Tottenham sub. He brought on Jonathan Dinzeyi for Rodel Richards however, there was no time for the 19 year old to affect the game and the final whistle was sounded shortly after his introduction. Spurs’ next and final group game is against Vitesse Arnhem this afternoon.

My man of the match: Goalkeeper Jonathan De Bie made three hugely important saves on Saturday morning and the quality of his all round performance was of the highest order. Without the Belgian we would have lost the game!