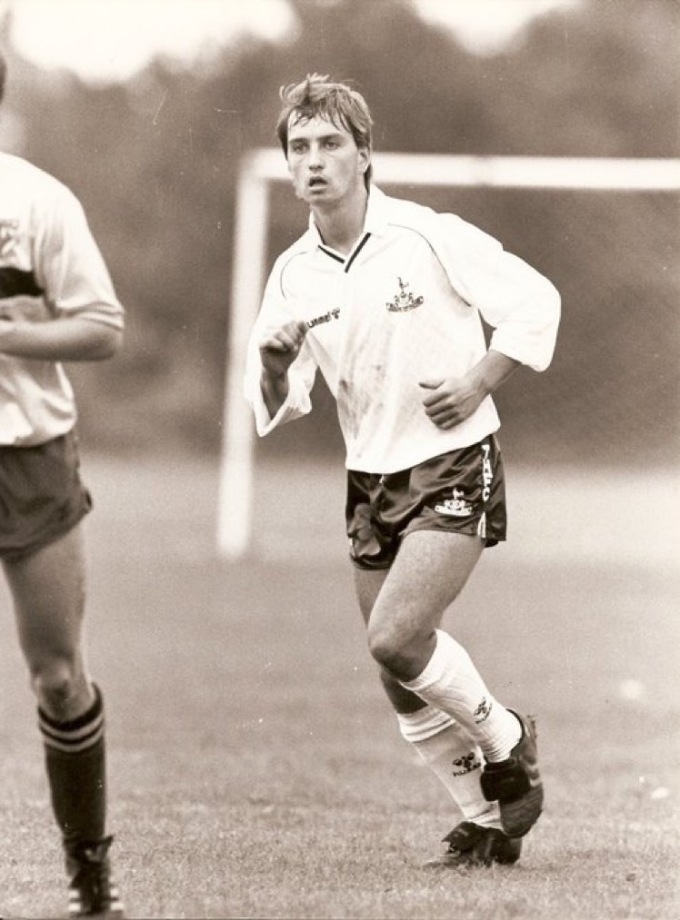 I caught up with former Spurs academy player Shaun Murray who played at the club during the late 80’s. Described as the star of the England Schoolboys’ midfield, the now retired Murray shared some of his memories with me, from being at Spurs to playing further down the footballing pyramid.

Shaun: From about 14 Spurs showed interest the scout at the time was John Moncur. He travelled up to Newcastle quite often, he was a lovely guy and the family and I felt comfortable with him. Spurs treated us well, it was amazing going down in school holidays and weekends to train and play matches. It was such a special place. I loved White Hart lane and the training ground at Cheshunt was special too. On occasions Peter Shreeves used to invite me to train with the first team, that was so nerve racking training with the likes of Glenn Hoddle, Ardilles and the likes. I was fortunate at that age there were quite a few clubs wanting to sign me, so it was difficult to come to a decision.I felt alot of pressure and it wasn’t nice turning clubs down. But I had a good feeling about Spurs, they made me feel welcome and I loved going down and playing for the juniors. There was something about the strip aswell, loved the colours.

Shaun: Mixed emotions to be honest. There were so many enjoyable times, playing two years in the youth team and winning the league both years and reaching the semis of the FA youth cup both years was a good achievement. It was quite difficult at times living away from home, when training was done you had a lot of spare time and it got lonely at times. Looking back now if I looked for more support and guidance it might of turned out different. Maybe a bit premature to leave Spurs, I had a contract up to 21. Should of maybe held on a bit.

Shaun: From a very early age I loved football and I felt very lucky that all the schools I attended the PE teachers were so inspiring. They encouraged me, helped me and made sport fun and interesting. All the staff at England schoolboys were great too. That gave me a lot of good times and great memories.

Shaun: Greatest influence at the club was Keith Waldron juniors manager at the time, I felt he had time for me and he was always enthusiastic about the game. Doug Livermore was a good coach and nice man.

Were there any other players at the club or outside who you’d model your game around?

Shaun: There were so many great players at Spurs. The reserves was full of talent too, so even getting an occasional game with them was an honour. Chris Waddle was class and also Gazza. One player I also admired was Mickey Hazard.

What was the toughest thing about being an academy footballer?

Shaun: Toughest thing being an apprentice which to be honest was not that hard was being on kit duty. Sorting out all dirty kit after training. To be fair we had it quite easy at Spurs compared to a lot of clubs.

How did your time as a youth player at Spurs prepare you for your later career?

Shaun: At Spurs you had to be at your best, expectations were high. Hard work and fitness was important but quality and finesse on the ball was what I thought you needed at a good level. So when I moved on to different clubs that was always my main aim, try and play the game skilfully.

Could you talk me through some of your favourite memories from your time as a youth player at Tottenham Hotspur?

Shaun: Favourite times at Spurs. I used to enjoy playing on White Hart lane in the cup games and other 1st team grounds. I remember scoring a hatrick at Reading and Terry Venables was watching and he passed a message down saying make sure I get the match ball. Used to love playing against the likes of Chelsea and Arsenal, we had some great encounters. I remember beating Arsenal 1-0 at their ground and I got the goal.

Shaun: After I left Spurs I joined Portsmouth, I played quite regular in my second season there under a manager called Tony Barton. I was getting established then unfortunately a new manager came in and I was out of favour. I spent a couple more seasons there on the fringe then moved onto Scarborough. I loved it there, really enjoyed the football and the manager Steve Wicks was great with me. I was there a season then moved to Bradford City. They were a great club, I was playing regular and enjoying my football. I was there for 4 seasons, won promotion to championship via play offs on second season and avoided relegation on last game of season the following year. I then moved on to Notts County and had 3 years there. Sam Allardyce signed me and first season I played most games, after that I played partly under new managers. I was 30 then and moved to Kettering Town in the conference. Another lovely time spent there, enjoyed my football and lots of lovely people associated with the club. I then went onto play with other non league clubs but stayed in Bingham which is a lovely little town near Notts.

Shaun: Pinnacle of career would probably be returning to side after Chris Waddle left Bradford and we had 10 games remaining and relegation threatened but we managed to avoid going down after beating QPR on last game. Also Chris Kamara promised a new two year contract if we stayed up and gratefully he kept his word. Also winning promotion with Bradford via the play offs. Unfortunately I missed final as was recovering from operation on achilles tendon but was still there at Wembley. Winning patrons player of year on first season at Notts County was a nice personal touch aswell. Winning promotion with Kettering Town was great too. It meant so much for the supporters and people connected to the club.

Shaun: After a lot of contemplation I’ve picked Georgia Kinkladze of Man city. He was amazing to watch, his speed with the ball at his feet when dribbling was top quality.

Shaun: Advice for youngsters starting off would be when tough decisions need to be made, have a moment and don’t react too hastily. Try and enjoy every moment as it goes very quickly.

What was the toughest moment of your career?

Shaun: Toughest moment would be the reality of it all finishing and getting prepared for a new chapter in life. Luckily I’ve got a gorgeous wife who’s been such an enormous support throughout and two beautiful sons who I still pester to have a kick around with me at any given chance.