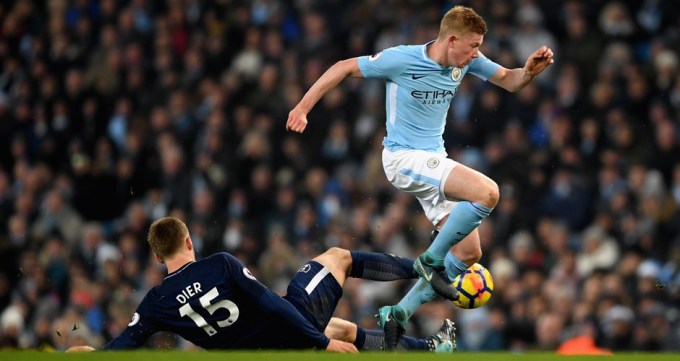 I think it’s fair to say that there weren’t too many Spurs fans who thought we’d come back from our game with Manchester City at the weekend, with anything other than a defeat. The brilliance of Pep Guardiola’s jaw dropping team which includes some of the most inform players on the planet, has captivated the imaginations of football fans with their fast attacking brand of football, breathtaking passages of play and their ability to tear apart the most sturdy of defences on the counter attack, the sky blues have become the most feared team in Europe. Was fear a factor in our 4-1 walloping at the hands of Guardiola’s side in Manchester yesterday evening? Probably not, but of course many fans will draw theories as to why Pochettino’s team were ripped apart so brutally, over the course of 90 minutes by the league leaders. Some may argue that Pochettino got his tactics wrong, that certain players weren’t up to scratch including Moussa Dembele whose name I have seen plastered across social media. However, in my eyes the factor behind Manchester City’s triumphant win over our lads, wasn’t down to tactical blunders by Pochettino or poor performances from his players. It was down to the individual brilliance of Guardiola and his incredible side that he has assembled, some of the football that his team are playing rival that off any produced in the premier league era. The fast incisive, counter attacking play that we saw yesterday would have beaten any side in Europe, the master creator Kevin De Bruyne the architect behind City’s superb forward play.

The game was an incredibly one sided one in which the home side controlled from the minute go, though the possession stats may not suggest that. Spurs were out run and outplayed over the 90 minutes unable to get many meaningful shots away, City attacked our four man defence with such ferocity and intent. That when they took the lead on 14 minutes following Ilkay Gundogan’s bullet header from the resulting corner, though the German was unmarked, it had come as no surprise. City had already peppered our defence in the opening minutes, their first of the game had come as no surprise. By some miracle we found ourselves just the one goal down at the break, Guardiola’s team had battered us, they were too sharp and extravagant for Pochettino’s team who had struggled to create at the other end. Whilst we started off the second period with much more intensity and creativity about our game, we still couldn’t stop the monumental attacking force of the citizens. We played with pride for a good 20 minutes but City’s second was always going to come. Kevin De Bruyne angered by a quite terrible challenge by Dele, took his frustrations out on the ball when he doubled City’s lead on 70 minutes. Two more followed as Spurs began to be carved open with devastating results. Substitute Gabriel Jesus missed a penalty before Raheem Sterling made it 3-0. And then 4-0 a couple of minutes later, what the fans were witnessing inside the Etihad was nothing short of a masterpiece. Whilst Christian Eriksen’s late consolation goal (which happened to be a fine strike) happened to bring a bit of late joy to the travelling fans.

It done little to shift the attention away from a Manchester City side who continue to defy expectation, their 16th league win on the bounce quite possibly their best yet. As for our lads, I can’t imagine there would have been many words said in the dressing room afterwards. There would have been nothing much to say other than that we had been the victims of a side who may just go on to achieve the quadruple this season! We certainly didn’t raise our game for the occasion but did he really play that bad? No is my answer to that, against any other team we probably would have got something out of that game. Yes, we were dominated in the central areas, Dembele and Winks struggling to cope. But that wasn’t there faults, nor was it the fault of our attacking players that they couldn’t carry the ball forward, and neither was it our defences fault that we took such an almighty battering. We are no longer used to as fans, to being outplayed like Man City done to us yesterday, we have come so far under Pochettino as a club then we have come under any manager in a generation, that the Tottenham of old has become a distant memory. Seldom though yesterday’s result was for us, as a fan all I can do is to take my hat off to Guardiola’s Man City. Their champagne football some of the best I’ve seen in many a year, their performance and in particular that of midfield maestro Kevin De Bruyne was quite simply out of this world! Some positives I did take away from yesterday’s game, was the superb shot stopping of Hugo Lloris. As well as the performance of the powerful Danny Rose at left back, who I thought had a fine game. Ultimately we lacked pace during yesterday’s encounter, and that is something I am sure Pochettino and Levy will be discussing ahead of the January transfer window.

We still find ourselves in a good position in the league and have some favourable fixtures coming up. Our next game away to Burnley on the 23rd, is definitely one that we can get back to winning ways. Champions league qualification is still with in our realms! COYS