Spurs under 19’s get off to great start in the UEFA youth league: 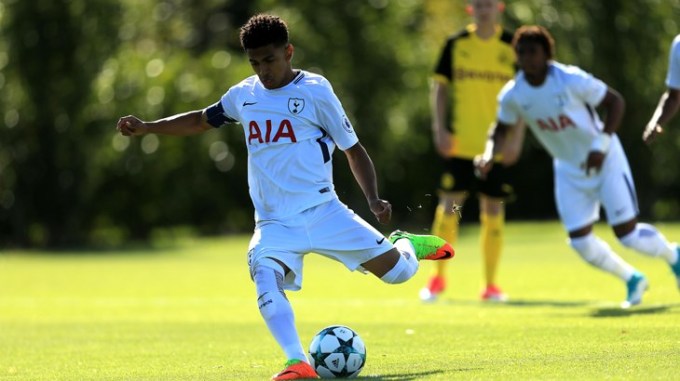 ”We can’t moan – it was 4-0, I thought we showed a clinical side to our game and we did pretty well so it’s pleasing in that respect. There’s still room for improvement but we’ll look to try to achieve that in the next few games.” (Scott Parker)

Yesterday was a day for Tottenham Hotspur supporters to saviour, it was a day in which we put the ‘Wembley curse’ behind us with a stunning 3-0 victory over Borussia Dortmund in the champions league. However, it was also a day which saw our under 19’s triumph in spectacular fashion over the German side, in their first group game of the UEFA youth league. Scott Parker’s strong side which boasted a plethora of talent, brushed aside Dortmund with a spectacular and solid display at our Enfield based training centre. Broadcast live on BT Sport for Spurs fans to enjoy, Spurs dominanted from the offing, with goals from Marcus Edwards x2, Keanan Bennetts and Kazaiah Sterling ensuring a comfortable win over a talented opposition. Spurs face APOEL Nicosia in their next game in less than a fortnight, the Cypriot side lost 10-0 to Real Madrid yesterday! I will be back reporting on our youth games on Saturday when I travel Leicester for our under 18’s first match of the new under 18 premier league cup. COYS

A couple of statistics: – Marcus Edwards now has four goals and two assists so far this campaign. Could we be seeing him next Tuesday against Barnsley?
– Spurs had 57% of ball possession to Dortmund’s 43%.
– Spurs recorded six shots on target to the visitors one.
– Our under 19’s win against Dortmund was only our second ever win in the competition since we made our debut last season.