A seventh straight league win for Mauricio Pochettino’s Spurs occurred on Saturday lunchtime, as Spurs’s recorded a 4-0 demolition over Bournemouth at the Lane. Yet another sparkling attacking performance ensued, as Pochettino’s young Spurs side outclassed the cherries with a stunning performance, as Spurs continue to go hot on the heels of league leaders Chelsea. Spurs started the game with a real desire and their fast and attacking style of play began to create some early openings for Pochettino’s side as they went on the attack. A quick fire effort from Moussa Dembele on 13 minutes testing the alert Artur Boruc, who was forced into making a good save down at his far post. Spurs’ early dominance of the game was rewarded three minutes later when Mousa Dembele put Spurs ahead with his first goal of the season. The goal came about after Christian Eriksen whipped the resulting corner in to the box, as it came out to the unmarked Dembele who powered an effort past Boruc with his right foot, that’s the first time Dembele’s scored a league goal with his right foot, 1-0 to Spurs! Spurs’ early goal set the tone for a game where they’d run Eddie Howe’s side ragged, the Lillywhites fierce attacking play caught Bournemouth out again minutes later when the inform Son Heung-Min doubled Spurs’ advantage. After Kane flicked a sumptuous pass on to Son who surged into the box, before firing a low effort underneath Boruc and into the back of the net, 2-0 to Spurs! 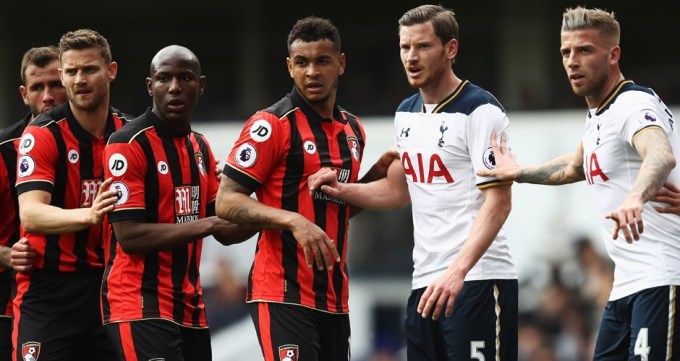 Spurs’ breathtaking style of play which saw them constantly change shape as players filled in for one another, was beginning to suggest that the game was a foregone conclusion. Spurs continued to create a flurry of chances including a notable effort from Eriksen on 36 minutes. Eriksen had a go from seven yards out after receiving an excellent first time pass from Kane, but Eriksen’s lashed effort was acrobatically thwarted away by Boruc. The interval couldn’t have come any quicker for the visitors, as Spurs continued to dominate proceedings, 2-0 up at the break. Spurs started the second half with exactly the same intent as they had the first, and it didn’t take long until Pochettino’s side extended their advantage, as Harry Kane netted Spurs’ third of the afternoon three minutes in. After Dele Alli passed to Kane in the box, the England striker showed good footwork to get past Francis before placing the ball inside the far post to effectively end the game. Bournemouth goalkeeper Artur Boruc was kept busy in the remaining minutes as he made a string of fine saves to deny the formidable attacking trio of Son, Kane and Eriksen from increasing Spurs’ lead. However, Boruc was helpless to deny our fourth of the game which came deep in stoppage time. Ben Davies’ cross from the left was received by Vincent Janssen whose first time effort was blocked on the line, but the Dutchman buried home the rebound, only his second goal from open play for Spurs, a massive confidence booster for a classy player. The final scores Spurs 4-0 Bournemouth, that sparkling attacking football that has been present throughout our season is showing no signs of depreciating, Pochettino’s side ripped apart a fine Bournemouth outfit with a truly sensational attacking display, Spurs fans will be watching tomorrows match between Man united and Chelsea with great interest! COYS

My man of the match: The masterful Mousa Dembele who put in one of his best performances of the season today. Dembele totally bossed the midfield with his dominant display overwhelming the cherries midfield, Dembele played with an attacking freedom as he glided past the opposition players, his goal was his first of the season.

12 – Christian Eriksen now has more assists than any other player in the Premier League this season. Dozen.