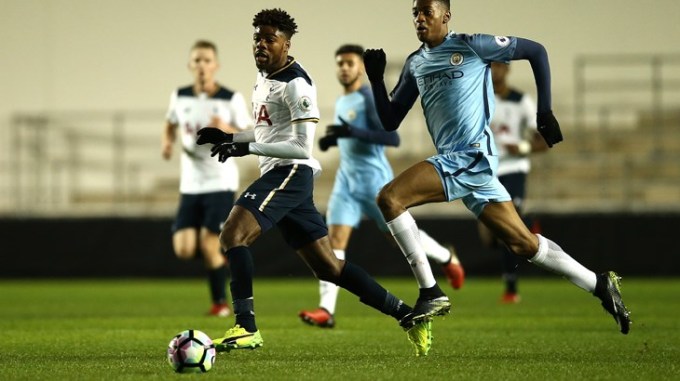 Our under 23’s fought back from two goals down, as they drew 2-2 with Manchester City on Friday evening. It was a thoroughly entertaining match as Ugo Ehiogu’s side showed great character as they came away with a valuable point in Manchester, playing some really attractive football in the process. The game started off with a sense of cautiousness from both sides, as they passed the ball around the park without any real attacking intent. Winger Nathan Oduwa had a half chance for Spurs in the 17th minute, after a nice bit of play Oduwa skilfully cut inside on the edge of the box, before firing a low effort against the side netting. The game was very even as Spurs managed to contain City well, but on 27 minutes Paolo Fernandes went close for the home side. Fernandes powerful shot in the area stung the palms of Tom Glover, who thwarted the Spaniards effort. However, not long afterwards Spurs began to cause Man City’s defence problems, as they passed the ball around nicely. And on 33 minutes Spurs were unlucky not to take the lead through Shilow Tracey. Owens passed the ball to Walker-Peters on the right and the England under 20 international sent a lovely pass to Tracey in the penalty area, Tracey struck it first time forcing a fine save out of Angus Gunn.

Moments later Tracey came close again, Harrison finding Tracey in the penalty area with a nice cross, and the former Ebbsfleet man met the cross well, side footing an effort against the post, with the rebound being lashed over the crossbar by Joe Pritchard. The match was becoming really live with Spurs looking the slightly better side, though goalkeeper Tom Glover was forced into action right on half time, after Jaden Sancho danced his way into the box, jinking past some Spurs defenders, before cutting in on his right and unleashing a powerful low shot, which Glover got down well to save. The first 45 was level pegging, Spurs played well creating some good chances from the flanks. The second half started in disastrous fashion for Spurs after they were caught cold in their own half, and the City attack punished us. Following a slight error from Maghoma after his misplaced pass came to Buckley-Ricketts who burst forward into the box, unleashing a powerful shot which Glover stopped excellently, the ball came out out to Sancho and the 16 year old made no mistake, poking the ball home, 1-0 to City. Things got even worse for Ehiogu’s side, as just over ten minutes later the home side doubled their lead after Paolo Fernandes doubled the citizens advantage with a stunning goal. Fernandes’s cut in on his left after receiving the ball from a short corner and the Spain under 17’s international let fly as the ball flew past the stunned Spurs goalkeeper, and into the top corner, 2-0 Man City.

Ehiogu’s side may have looked depleted but they didn’t show it in the minutes that followed. Spurs created some fine chances most notably a nice turn from Stylianides as he burst through on goal only to see his effort stopped by Gunn. And Spurs’s hard work was starting to pay off when they got a goal back through Nathan Oduwa on 76 minutes. Shilow Tracey sent in a wonderful cross from the right which was met by Oduwa, as he sidefooted the ball home with a volley, at the back post. Spurs went from strength to strength, coming close to snatching a late equaliser from a double chance which saw Harrison and Stylianides come close. That late equaliser did come four minutes from time, after Oduwa weaved away from his man on the left, the Nigerian youth international whipped the ball into the area as Harrison made contact with the ball, and the ball eventually came to Tracey who converted from close range to secure an important draw for Ehiogu’s side. The final score Spurs 2-2 Manchester City, it was a truly exhilarating game of football and I was delighted that the team got something out of the game after such a good performance. Also I’d like to say well done to Manchester City who broadcasted the game live on Facebook allowing some of us Spurs fans to watch the game.

Our under 23's showed great resilience this evening, as they came back to draw 2-2 with city. The players played some lovely football… 1/2

@LMcCand great going forward and showed great character. Such an entertaining game of football. My match reports on the way. #PL2 #COYS

Nathan Oduwa was my man of the match (see below) but another player who had a brilliant game was Shilow Tracey, the powerful right winger set up Oduwa with a delightful cross and Tracey also scored the equaliser late on, Friday nights goal was his third of the season. Finally I thought that midfielder Zenon Stylianides had a big influence on the game after coming on in the second half, the midfielder played a more attacking role against city and he really impressed me. Stylianides was bright and creative he was constantly looking to go forward and he set up Harrison with a nice pass as well and his fine solo effort late in the match was unfortunate not to end in a goal. At the end of the day everyone played well, the defence was resilient, Glover made some fine saves between the sticks, and the midfield was tenacious. COYS

My man of the match: This was a hard one, it was close between Tracey and Oduwa but I’m going to give it to Nathan Oduwa. The winger seems rejuvenated since returning from his loan at Peterborough, he was good last week against Chelsea but he was even better today. Oduwa worked so hard down the left flank and was as skilful as ever, Oduwa never fails to surprise, me his such an entertaining and creative player, his a magician on the ball. Oduwa was by the far the most creative player on the field his powerful runs, trickery and endeavour were rewarded with a goal and an assist. Another top performance from Oduwa.