Spurs under 23’s fall to narrow defeat against Manchester City at the lane: 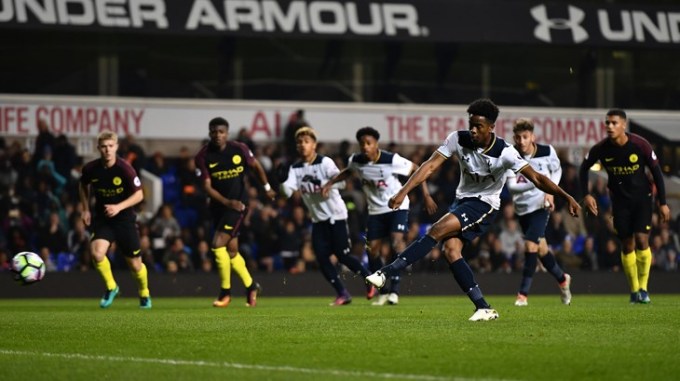 Yesterday evening our under 23’s were beaten 2-1 by Man City in a PL2 game at the lane, it was a brave effort from Ugo Ehiogu’s side who were for the most part playing with ten men following the dismissal of Ryan Loft in the 25th minute. The blues took the lead in the sixth minute through Javairo Dilrosun before being awarded in a penalty on the stroke of half time. However, goalkeeper Alfie Whiteman made an excellent save to deny Paolo Fernandes from the spot, the talented Spanish youngster later doubled City’s lead in the 55th minute. However, a resilient Spurs side fought back and piled on the pressure against the visitors going close to scoring on numerous occasions. Ehiogu’s side got a goal back late in the second half after substitute Shayon Harrison netted his fourth goal of the campaign after converting from the penalty spot. However, the young Lillywhites just couldn’t draw level despite their best efforts it just was not to be. An in depth match report is provided below on the Spurs website. The under 23’s side go again next week against Leicester city at the King Power stadium.
http://www.tottenhamhotspur.com/news/under-21s/match/report/spurs-v-man-city-premier-league-2-report-141016/