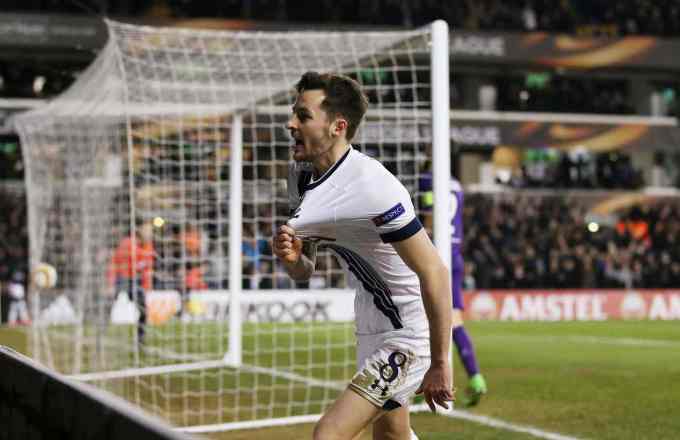 Match report:Our exceptional performance against La Viola last night sent us marching into the round of 16 as a side that no one will want to face.Fiorentina who sit third in Serie A started the game on par with us with possessional football being the style exhibited by both sets of players.However it was clear in the early stages that our hunger to extend our lead was fierce as we weren’t keen to sit back and play the waiting game.Eric Dier went the closest early on,as in the 12th minute he leapt high to power a header from the resulting corner,it strayed narrowly wide with Alli unable to meet it despite his best efforts in the box.A passionate response from Sunday’s heartache preceded and in the 25th minute a promising move resulted in the deadlock being broken.The lads broke in to a free flowing attack and after a good run from Mason,Alli passed to him from outside the box and the academy graduate ceased his opportunity as his skilful run in to the area resulted in a perfect side footed finish in to the bottom left hand corner of the net,1-0 Spurs!Shortly before half time Fiorentina went close through former West brom man,Borja Valero.The spaniard found himself in space and as a dangerous free kick was whipped in Spurs were fortunately left off the hook as Valero’s inaccurate header hit the side netting.

The second half started with a sense of panache from the lilywhites and it immediately showed as Nacer Chadli put the ball in to the back of the net after a good move, however the Belgian had strayed just offside.In the 63rd minute we doubled our advantage against the Italians,Nacer Chadli hit a powerful effort after meeting a pin point pass, though Fiorentina’s goalkeeper Ciprian Tătăruşanu denied him with a brilliant save.However,the ball eventually came to the unbalanced Lamela who swivelled around to make an adroit finish, a wonderfully crafted goal 2-0 Spurs!However,a wonderful European performance was slightly overshadowed by a booking for Alli in what was an extremely harsh decision by the referee,as he deemed a shove on Alli to have been simulation from the 19 year old,that yellow card means he will miss our first leg tie against Dortmund.Two minutes later Trippier capped of a wonderful performance by threading an exceptional cross through to the danger zone as Fiorentina’s Gonzalo Rodriguez attempted clearance ended up in the back of the net,3-0 to Spurs!

A little over five minutes afterwards Spurs nearly made it four,Ryan Mason struck a wonderful volley from just outside the area which was beat away by the Fiorentina goalkeeper.We again went close in stoppage time,Eriksen had a shot saved well from Tătăruşanu the Danes low strike almost nestling in the back of the net.The final score Spurs three Fiorentina nil,an outstanding display from the lads as they responded in style to Sunday’s defeat.We march on in to the round of 16 where we will face Borussia Dortmund in what will be a gargantuan European cup tie.Our performance on the night was exceptional as we outclassed the third place Serie A side in every sector,every player in our team was brilliant through out.Toby Alderweireld put in a magnificent display as the sheer class of the Belgian international showed through out as he dealt with Fiorentina expertly.Lamela and Ryan Mason were the offensive stand outs Mason was phenomenal as his passion and work rate and ultimate performance made him my man of the match with him netting his second goal of the season.Lamela also sparkled through his skill and creativity wowing the Spurs faithful,and his goal was taken extremely well.Swansea up next for the lads on Sunday,COYS⚽️ 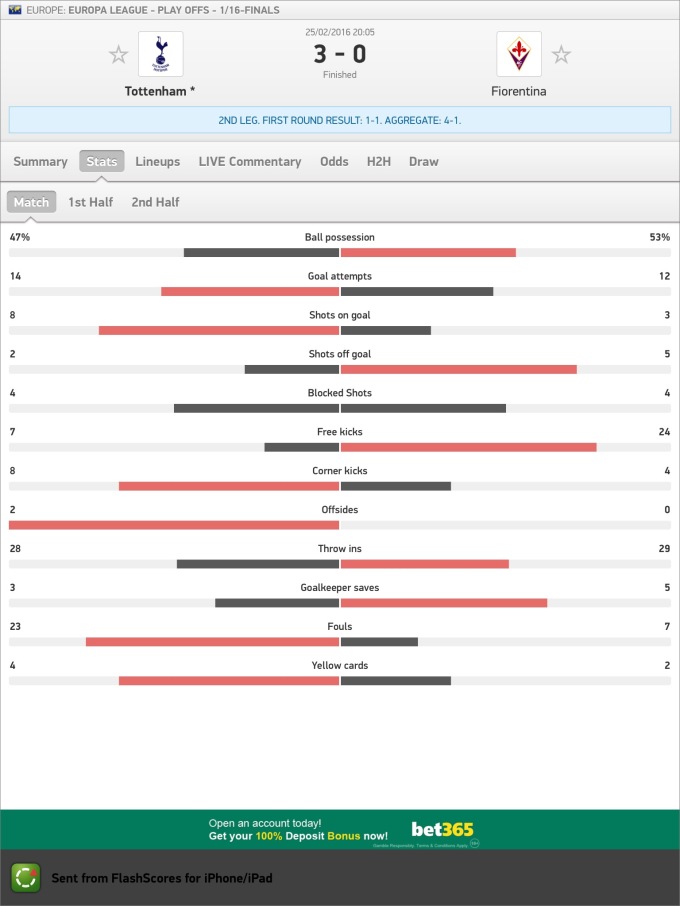