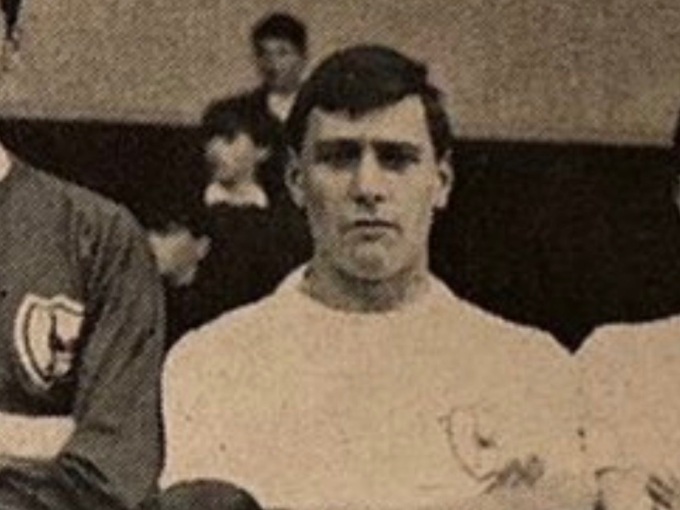 I caught up with former Spurs player Jimmy Lye recently to interview him about his time at the Lilywhites during the late 1950’s and early and mid 1960’s. Lye, who was born in County Tipperary, Ireland but brought up in Hackney, London was a left half during his time at Spurs though he would later become a fullback after departing the North London club when he played for Barnet where he played with fellow former Spurs teammates Ben Embery, Ricky George and Ian Fusedale who sadly passed away recently. Lye also played for  Dagenham and Redbridge and Cambridge City. Lye was only ever a part time player at Spurs (he played for the juniors, A team and reserves) as he also worked in the printing trade, this would have been a great challenge for the then promising young footballer.

What are your earliest footballing memories?

Jimmy: It would have to be being picked for the school team when I was nine years old for the under 11’s.

Jimmy: I actually played in a cup final in the Star shield against Tottenham under 15’s when I was playing for Hackney boys under 15’s and we drew at Leyton Orient and then the replay was at Tottenham. Anyway we ended up winning 4-3 and one of the scouts from Tottenham was there and he ended up coming down my house, and I ended up signing for Tottenham and that was in 1959.

What was your time at the Lilywhites like on the whole?

Did you have any footballing heroes/inspirations and if so who were they?

Jimmy: Well Dave Mackay was the best player that I thought was at Tottenham and Cliff Jones who I also used to like as a man as well as a footballer, as he was a great player. They were in my opinion the two best Spurs players at the time when they did the double.

Could you describe to me what type of player you were and what positions you played in for Spurs during your time there?

Jimmy: While I was at Tottenham I normally played at left half, it was only when I left Tottenham and when I came to Cambridge City that I ended up playing fullback. In fact when I went for a trial when I was 14 I was playing fullback then, but what Spurs did was they moved me forward to wing half so the amount of time I was at Tottenham the old style of football was as a left half. However, later on in my career when I went to Barnet and Dagenham I was a fullback/right back.

What was it like to brush shoulders with some of the legendary players that were around at Spurs at the time?

Jimmy: It was really good because they weren’t one bit off handed and during that time I used to take a big interest in boxing in the time when there was only eight weights in boxing. I used to talk to the first team players as they were quite interested in boxing at that time. You used to mix with the first team and being in the reserves there could be a first team player getting over an injury playing in the reserves for two of three weeks to try and get over an injury, so you would get to play with those type of people.

During the 1962/63 season you played with Danny Blanchflower in the old A team, what was he like to play with?

Jimmy: Well in fact he once gave me a lift after he was coming back from a knee operation which was a cartilage, and at that time it was quite a serious operation. After picking up this injury, he was in his mid thirties at that time and he actually played in the A team just to get a bit of fitness. What we used to do was turn up at the ground at White Hart Lane and get on the coach and drive down to Cheshunt where the pitches were, but Danny said to me do you want to come with me as I’m going by car, and so I went in his Jaguar car with him. Danny was a nice man but he didn’t have that much to do with me as I wasn’t actually at Tottenham full time as a ground staff boy or even as a full time professional so I wouldn’t mix with the likes of Blanchflower. The only time that I would mix with them was during pre-season training when I used to get two weeks off of work and go to Cheshunt to train, and when everyone would get their picture taken together.

Who were your greatest influences at Spurs?

Jimmy: When you say greatest influences I suppose when I was a kid there was a gentleman called Sid Tickridge who was the youth team manager and he was a very nice man who would pass on his information down to you. You would also look up to Bill Nicholson however, at the time Eddie Baily was the manager when I was in the reserves but all in there own way you looked up to them as an 18, 19, 20 year old and of course you would take notice of what these people were saying to you.

Were there any players at Spurs who you would watch closely to try and improve your game or look to learn from?

Jimmy: I’m a great believer that you can look at players but at the end of the day you are only as good as what you are yourself. We’d all like to be able to play like Dave Mackay but if you were a wing half you couldn’t play like Dave Mackay because he was in the first team. Every game you went out and did the best that you could and hoped that the coaches would pass that onto Bill Nicholson, and ultimately I had a few seasons in the reserves as a part time professional which I was lucky to do as the only other player to my knowledge that did that was Peter Baker.

What prompted you to leave Spurs and could you talk me through your career after you left the Lilywhites?

Jimmy: At the end of the day I was 21 coming up to 22 and after being a part time professional for five years and let’s be fair I had progressed as far as I was going to. I was never going to get into the first team at Spurs because they were a team of internationals and things like that. So what happened was that I got called in at the end of the season and they said thank you very much Jim but we feel that you’ve gone as far you can with us but we’ll have to let you go. So what you done then was hoped that some would come in for you, I had a couple of opportunities at going up north for a couple of league sides but I wasn’t interested in that because I didn’t want to become a full time professional who was playing in the third division or something like that. So at that time Tony Marchi he had just become the manager of Cambridge City in the Southern League and what happened was that he took me Alan Dennis and Ian Fusedale down to Cambridge City, but after six months Tony Marchi got sacked. The three of us stayed on for that season but at the end of the season Alan Dennis and Ian Fusedale were let go and were given a free transfer, but they wouldn’t let me go. So there I was travelling down to Cambridge City on my own for the following season which was what I did but at the end of the day I turned around and said to the chairman that I couldn’t carry on like this because I worked in the print so I was unable to play any games that were away from home. So after that I ended up signing for Barnet and I was at them for about six years where we managed to get to the FA Trophy final where we were beat unfortunately. However, we had a good team and we were a very good footballing side. Then at the back end of my career when I was 30 in about 1972, and in them days when you were a professional you couldn’t play for an amateur side. However, they changed the rules around that time so I ended up joining Dagenham and Redbridge as my final club which I enjoyed.

What was the greatest moment of your footballing career?

Jimmy: Probably when we (Barnet) went to Wembley and played Stafford Rangers in the FA Trophy final. I was the captain of the team in front of 35,000 people standing before you which was nice, but unfortunately we got beat 3-0 with a team that really had nine players on who weren’t fit, while two were only semi fit, but that was just the way it was and we got beaten.

Could you talk me through some of your favourite memories of your time in the Tottenham youth team/A team?

Jimmy: During the first season I was at Spurs we didn’t have a great youth side. However, in the second season that I was there you had players like Philip Beal and Roy Low, and at the end of the day we seemed to win every game that we played. And then when you’d step up to play for the A team in the Eastern Counties League which was a professional league at that time where you played against men who played for the likes of Colchester, Lowestoft and Cambridge who were all decent players.

Who was the toughest player that you ever came up against?

Jimmy: The toughest player in opposition was probably Ronnie Harris I suppose. As well as being tough he was also dirty and he was a hard tackler however, he wasn’t trying to put the boot in .

Were there any players at Spurs who you were particularly close to?

Jimmy: Well when we were kids at Spurs I was close with Alan Dennis and Ben Embery who I later spent many years with at Barnet.

What would your advice be to the young Spurs players of today as they look to break into the first team?

Jimmy: To be truthful unless you’ve got natural ability and are dedicated it is very tough, If you’re good enough you’re good enough and that’s just how it is. I’m a great believer that you can only get to a certain standard. Later on in my career I became a fullback I just wish that I’d moved into that position when I was a youngster as I was better there, so that was one of my regrets at Spurs.

After all these years how do you look back on your time at the Lilywhites and s Spurs a club who you still hold close to your heart?

Jimmy: Of course, I always look for their results but the trouble is that when we were at Spurs it was the glory times when they won the double so I was fortunate enough to be at Tottenham when they did all of that.