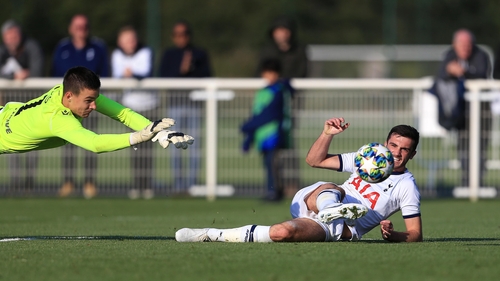 Our under 19’s hosted Greek side Olympiacos at Hotspur Way on Tuesday afternoon, in a crucial UEFA Youth League group stage encounter. Ryan Mason’s side needed to win this game to stand any chance of progressing from group B, and that’s exactly what his side managed to achieve. However, it was far from easy for Spurs, as Olympiacos were compact and defensively solid. After creating a number of decent chances Spurs finally scored what turned out to be the winner on 57 minutes, courtesy of a fine strike from the potent Troy Parrott. Spurs lined up in their usual 4-2-3-1 formation with a couple of notable changes from that 2-0 defeat to Crvena zvezda. Josh Oluwayemi started in goal while a back four consisting of TJ Eyoma, Malachi Fagan-Walcott, Luis Binks and Dennis Cirkin lined up in front of him. Captain Jamie Bowden and Tashan Oakley-Boothe partnered up in central midfield while Dilan Markanday and J’Neil Bennett operated out on the flanks, either side of CAM Harvey White. Spurs got the game underway on a cold day at the Tottenham Hotspur training centre. Jamie Bowden’s early deflected effort off of Georgios Fekkas was eventually gathered by Konstantinos Tzolakis, only after he had caught Spurs defender Luis Binks. After Troy Parrott flicked on Dilan Markanday’s cross the ball came very close to being latched onto by Harvey White inside the Olympiacos box.

A couple of minutes later and after getting onto TJ Eyoma’s sprayed pass, J’Neil Bennett volleyed the ball into the direction of Dilan Markanday in the centre of the oppositions penalty area. Markanday’s powerful, first time effort flicked off of Troy Parrott before going narrowly wide of the goal. J’Neil Bennett had a cross towards Dilan Markanday cleared away by Anastasios Boskouidis at the last moment, before Harvey White cleared away Ilias Martinis-Apostolos’ free kick. Then a couple of minutes later Alexandros Voilis passed the ball to Martinis-Apostolos on the edge of the Spurs box however, his low curling effort was brilliantly tipped behind the left hand post by the diving Josh Oluwayemi. Martinis-Apostolos then shot wide from Nikolaos Gkotzamanidis’ corner kick. A couple of minutes later Harvey White fed the ball into Troy Parrott (the Irishman had timed his run to perfection) inside the Olympiacos penalty area however, he took his shot early and curled the ball just wide of the goal. Georgios Fekkas blocked a shot on goal from Jamie Bowden before Spurs came close to taking the lead through Troy Parrott. Fagan-Walcott passed the ball to Eyoma who in turn gave it to White. He sent a low cross into the Olympiacos box towards Parrott who turned and shot, but his shot took a deflection off of Nikolaos Gkotzamanidis before being saved by Tzolakis.

After going on a promising forward run Dennis Cirkin cut inside from the left flank before having a powerful effort on goal saved by Tzolakis. After Parrott passed the ball to Bowden the Spurs captain sent a cross into the Olympiacos box which Dilan Markanday nodded wide of the goal. Harvey White then had a corner kick gathered by Tzolakis before Bennett jinked past Nikolaos Freris before having a shot blocked by Gkotzamanidis. Shortly before halftime Troy Parrott latched onto Jamie Bowden’s long ball before firing it over Konstantinos Tzolakis’ crossbar from inside the Olympiakos box, before the referee sounded his whistle for half time. Olympiacos got the second half underway. After managing to find Harvey White at the back post of the Olympiacos goal from Troy Parrott’s whipped cross, White had only the goalkeeper to beat however, his side footed effort was spectacularly tipped over the crossbar by Konstantinos Tzolakis to prevent Spurs from taking the lead. J’Neil Bennett then had a shot saved by Tzolakis before Alexandros Voilis headed over Ilias Martinis-Apostolos’ corner kick at the opposite end of the pitch. After receiving Troy Parrott’s lofted pass, J’Neil Bennett headed the ball across the face of the Olympiacos goal but no one was there to meet it. Konstantinos Tzolakis then saved Jamie Bowden’s effort from distance.

Spurs finally took the lead in the 57th minute of the game courtesy of a fine strike from Troy Parrott. After receiving TJ Eyoma’s pass on the edge of the Olympiacos box, Parrott calmly curled the ball (first time) past Konstantinos Tzolakis and into the top right hand corner of the goal, 1-0. Shortly after the restart and after receiving Luis Binks’ pass, Dilan Markanday had a cross cleared away by Anastasios Boskoudis. A couple of minutes later a Harvey White corner kick came to Parrott who headed wide of the goal. Left back Dennis Cirkin was shown a yellow card shortly afterwards before Paris Maghoma came onto replace Dilan Markanday. Maghoma fired over from distance after receiving Dennis Cirkin’s pass before Troy Parrott was shown a yellow card for a late challenge on Giorgios Neofytidis. Harvey White had an excellent thumping effort tipped over the crossbar by Tzolakis before Jamie Bowden fired over from long range. Bowden was replaced shortly afterwards by Maurizio Pochettino. J’Neil Bennett then whipped a menacing ball across the face of the Olympiacos goal before Rodel Richards came onto replace Troy Parrott for the final minutes of the game. This was an important win for Spurs however, Crvena zvezda unfortunately held Bayern Munich to a draw in the other  group game. That means that Spurs must beat Bayern Munich away in their final group game, and hope that Crvena zvezda drop points to Olympiacos.

My man of the match: Dubliner Troy Parrott led the line with aplomb for Spurs on Tuesday afternoon. Parrott put in a great shift for the team, pressing relentlessly and running non stop. Furthermore, the second year scholar held the ball up well, did a good job at bringing others into the game, but most importantly of all he scored a fine goal which secured all three points for Spurs. I paid close attention to Parrott yesterday and his off the ball movement was second to none, and in my eyes I thought that he had a very good game.