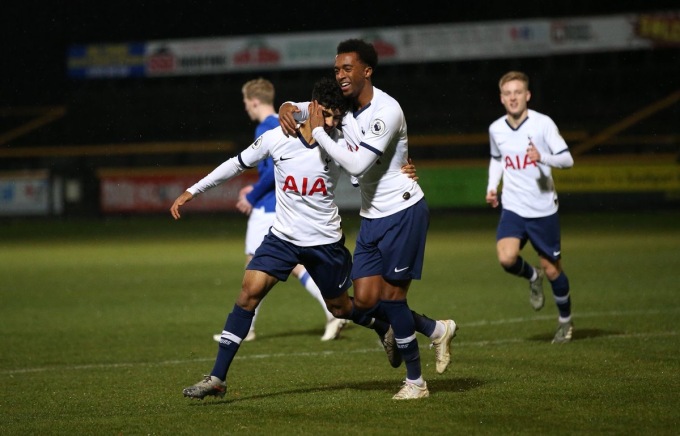 Our under 23’s returned to PL2 action on Friday night when they took on mid table Everton at the Pure stadium in Southport. Wayne Burnett’s side put in one of their best performances of the season thus far as they dismantled the reigning champions of the PL2 division one, by comprehensively beating them 3-1, in a game that Spurs completely dominated for large periods. After opening the scoring in the fourth minute of the game through Dilan Markanday Spurs began to knock the ball around the park well. The energetic Armando Shashoua made it 2-0 to Spurs on 42 minutes, before the 18 year old netted his second goal of the game nine minutes into the second half to give Spurs a three goal cushion. Late pressure from the home side saw them pull a goal back through Dennis Adeniran however, Spurs defended strongly for the remaining minutes of the game to secure the victory. Spurs lined up in their usual 4-2-3-1 formation as Josh Oluwayemi started in goal for the Lilywhites. A back four consisting of captain TJ Eyoma, Malachi Fagan-Walcott, Luis Binks and Tariq Hinds sat in front of him. Harvey White and Tashan Oakley-Boothe partnered up in central midfield while Dilan Markanday and Shilow Tracey operated out on the flanks, either side of CAM Armando Shashoua. Rodel Richards led the line for Spurs. Spurs got the game underway on a cold and wet night in Southport. After a bad early pass from Tottenham goalkeeper Josh Oluwayemi, Everton’s Harry Charsley latched onto the ball. The Irishman darted forward down the left flank before crossing the ball into centre forward Ellis Simms inside the Spurs penalty area. Simms controlled the ball before volleying it over Oluwayemi’s crossbar, but he ought to have done better from that range. A couple of minutes later Spurs took the lead. After Malachi Walcott sprayed a lovely pass out to Shilow Tracey on the left flank the speedy wide man sprinted past Alex Denny down the left side of the Everton box, before attempting to square the ball for Tashan Oakley-Boothe. Everton goalkeeper Harry Tyrer palmed the ball out and after a bit of a scramble Dilan Markanday was there to clinically slot the ball into the back of the goal, 1-0.

Everton tried to respond immediately from the restart. The pacy Dennis Adeniran whipped in a cross which just deceived Ellis Simms inside the Spurs box before TJ Eyoma cleared away Antony Evans’ corner kick. Adeniran then whipped a dangerous low ball across the face of Oluwayemi’s goal. After Shashoua had passed the ball to Oakley-Boothe the Spurs midfielder gave it to Rodel Richards on the edge of the Everton box. The Spurs strikers attempted forward pass went into the box and he managed to get back on the end of it before shooting wide of Harry Tyrer’s goal. After receiving Tariq Hinds’ pass on the edge of the Everton box Dilan Markanday had a shot blocked by Matthew Foulds. After coming in from the left flank Shilow Tracey had an effort on goal blocked by Ryan Astley with the ball almost falling kindly for Rodel Richards inside the penalty area. After Malachi Fagan-Walcott conceded a free kick out on the left flank, Antony Evans had a whipped effort saved by Spurs goalkeeper Josh Oluwayemi. A couple of minutes later Dilan Markanday headed wide a cross from Tariq Hinds before colliding with Matthew Foulds, there was a brief pause in play. A good Spurs move saw Tracey pass the ball to Shashoua, he in turn gave it to Oakley-Boothe who passed it to Markanday. Markanday passed the ball back to Oakley-Boothe on the edge of the Everton box however, he dragged his shot wide of the goal. Shortly afterwards Oakley-Boothe had a deflected cross volleyed straight at Ryan Astley, by Dilan Markanday. Spurs doubled their lead in the 42nd minute of the game through Armando Shashoua. After Eyoma passed the ball to Oakley-Boothe out on the right flank the central midfielder found the run of Armando Shashoua in the centre of the Everton box, and the creative midfielder calmly slotted the ball into the bottom left hand corner of the goal, 2-0.

Antony Evans responded for the ‘ Toffees ‘ by curling a deflected effort wide of goal from distance, before Tariq Hinds headed clear the same players corner kick. Malachi Fagan-Walcott blocked Ellis Simms’ shot from inside the Spurs box before Josh Oluwayemi punched clear a corner kick from Everton captain Antony Evans. The referee Andrew Miller sounded his whistle for half time a couple of moments later. Everton got the game back underway. After being given the ball by Tashan Oakley-Boothe on the edge of the Everton box, Armando Shashoua had a low shot saved by Harry Tyrer. A couple of moments later Tariq Hinds managed to find Shilow Tracey inside the Everton box however, his resulting shot was blocked by Tyler Onyango before Spurs netted their third goal of the game. After receiving Tariq Hinds’ pass inside the Everton box the Spurs striker unleashed a powerful effort on goal. Goalkeeper Harry Tyrer could only parry it into the path of the alert Armando Shashoua who calmly side footed the ball home, 3-0. Shortly after the restart Rodel Richards was shown a yellow card for making a late challenge on Antony Evans, a bit of a confrontation between both sets of players followed. Oluwayemi then saved Antony Evans’ chipped effort on goal, before Harry Charsley slipped the ball into the feet of Ellis Simms down the right side of the Spurs box however, his powerful low effort was smartly tipped around the post by the attentive Oluwayemi. After going in late on Ellis Simms, Harvey White was shown a yellow card. Shortly afterwards a cross from Shilow Tracey found Dilan Markanday inside the Everton penalty area but his resulting shot was blocked by Ryan Astley. After skinning Alex Denney down the left flank Shilow Tracey had a low shot saved by Harry Tyrer with Rodel Richards unable to get to the ball on the follow up. Josh Oluwayemi saved Harry Charsley’s effort from long range before a good Spurs move came close to ending in a goal.

After Shashoua passed the ball to Tracey the Tottenham winger passed it to Hinds who in turn gave the ball to Oakley-Boothe, whose powerful effort on goal was blocked by the head of Ryan Astley. Manasse Mampala then curled an effort over Oluwayemi’s crossbar from long range before Oakley-Boothe passed the ball to Shashoua inside the Everton penalty area however, his shot was blocked by Ryan Astley. Dilan Markanday then had a shot blocked by the same player before Spurs made a double substitution in the 80th minute of the game. Maurizio Pochettino and Phoenix Patterson came onto replace Rodel Richards and Dilan Markanday, as Shilow Tracey went up top to lead the line. Luis Binks blocked Antony Evans’ shot on goal before the ‘ Toffees ‘ pulled a goal back through Dennis Adeniran. After bursting forward from deep the former Fulham man fired an unstoppable effort past Oluwayemi and into the bottom left hand corner of the goal, 3-1. Malachi Fagan-Walcott cleared Nathangelo Markelo’s cross before the Dutchman tested Oluwayemi from range. Markelo’s powerful strike was tipped over the crossbar by the Spurs goalkeeper. Luis Binks cleared Antony Evans’ resulting corner kick before Manasse Mampala headed over Alex Denny’s searching long pass. Con Ouzounidis’ cross was headed into the arms of Josh Oluwayemi by Antony Evans before Ellis Simms rounded Malachi Fagan-Walcott on the edge of the Spurs box before entering the penalty area. However, the brave Luis Binks slid in and managed to get some of the ball which ran through to Manasse Mampala who fired the ball into the side netting. Con Ouzounidis’ cross was met by Ellis Simms inside the Spurs box and the Everton strikers bullet header was saved excellently by Oluwayemi, before Simms fired over on the half volley. Simms then headed over Antony Evans’ corner kick before the referee brought an excellent Spurs team performance to an end by sounding the full time whistle.

My man of the match: This was yet another excellent performance from CAM Armando Shashoua for our development side. The 19 year olds electric movement, non stop pressing and running, as well as his fine balance and skill made him too difficult and too tricky for the ‘ Toffees ‘ to contain. Shashoua took both of his goals well on the night however, it was his excellent movement and intelligent decision making which impressed me most of all, everything from his passing to his ball control was top draw. I was watching last nights game with former Spurs youth team player Martin O’Donnell and he was mightily impressed with the talented Shashoua’s performance.