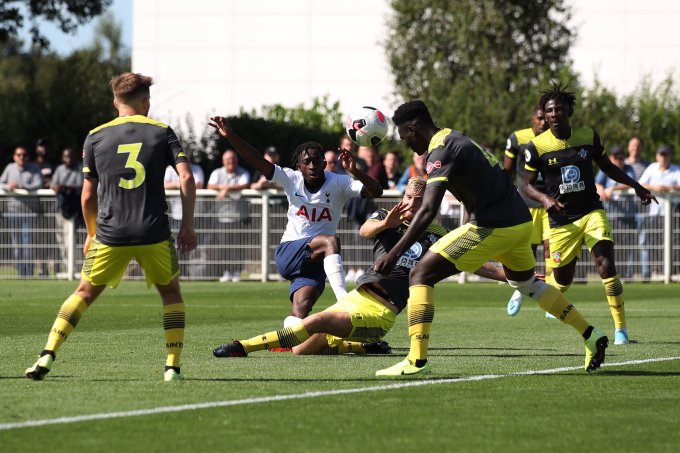 (This photograph is from Tottenham Hotspur FC).

Our under 23’s resume PL2 action after the recent international break when they take on Everton in Southport, at the Pure stadium on Friday night. Wayne Burnett’s sides last game was a very physical one against Gillingham in the Leasing.com trophy in which they put in a decent performance in. Spurs sit two points behind Friday’s opponents Everton in ninth place in division one, and in fact both sides haven’t started the season in the way that they would have wanted to. The ‘ Toffees ‘ who are managed by David Unsworth have struggled for form of late, and they haven’t won any of their last six fixtures in all competitions. Everton have however, picked up eight points from their four home league games so far this season. A team who we have a historically bad record against at this level, some of Everton’s talents to look out for on Friday night include tenacious midfielder Beni Baningime, defender Lewis Gibson and centre forward Ellis Simms who has netted three goals from six appearances in the PL2 so far this season. Everton are a physical team who like to play good, attacking football, and Friday nights game will be a difficult one for Wayne Burnett’s side. However, they will be encouraged by the fact that centre forward Rodel Richards has now returned from injury. I will be travelling up to Southport on Friday afternoon to report on this game before I then head to Newcastle for our under 18’s premier league cup game the next morning. I would like to wish our lads all the very best of luck for the game.