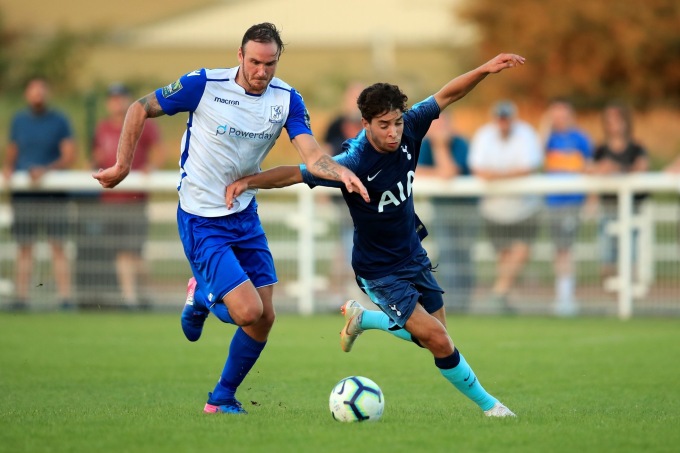 Our development sides final pre-season friendly takes place tomorrow night when Wayne Burnett’s lads take on BetVictor Isthmian league side, and local neighbours Enfield Town, at the Queen Elizabeth II stadium. Burnett’s side who are just back from their time in Ploufragan, France will be looking to end pre-season on a high as they go into the new PL2 campaign which kicks off on Saturday the 10th August. After drawing their two previous pre-season friendlies and finishing third at the Tournoi Europeen, Spurs will take on an Enfield team who they defeated 2-1 the previous pre-season thanks to a brace from Marcus Edwards. Enfield Town who are managed by Andy Leese (their assistant manager is ex Spurs player Mario Noto) finished in tenth place in the BetVictor Isthmian league last season after they started the 2018/19 campaign really promisingly. Although they are the lowest ranked side that our under 23’s have faced this pre-season there are a number of players on Enfield Town’s books that Spurs will have to be wary of tomorrow evening (kick off is at 7pm). They include centre forward Muhammadu Faal, Lewis Taafe, Ryan Blackman, Dan Rumens and Marc Weatherstone. Former Spurs youth player and Enfield Town’s assistant manager Mario Noto still plays the occasional game and I’m sure that he’d love to be involved against his former club tomorrow. I am expecting another very physical test, similar to the ones in which we had against Ebbsfleet United and Dulwich Hamlet however, I’m confident that Spurs’ technical ability and superior fitness levels will get them the win. Once again it will provide the Tottenham youngsters with some invaluable experience and as games go this promises to be an intriguing affair. I would expect to see a similar Spurs side to the one which competed at the Tournoi Europeen in France however, the likes of Samuel Shashoua and Brandon Austin could all return to action for tomorrow’s game. I shall be reporting on the game and I will have my in-depth match report out on Thursday afternoon. I would like to wish Wayne Burnett’s side all the very best of luck for the game.

My one to watch: Enfield Town centre forward and former L’Aquila man scored Muhammadu Faal scored three goals in five competitive appearances last season in what was a nightmare campaign with injuries for the 22 year old. He is my player to watch tomorrow night.