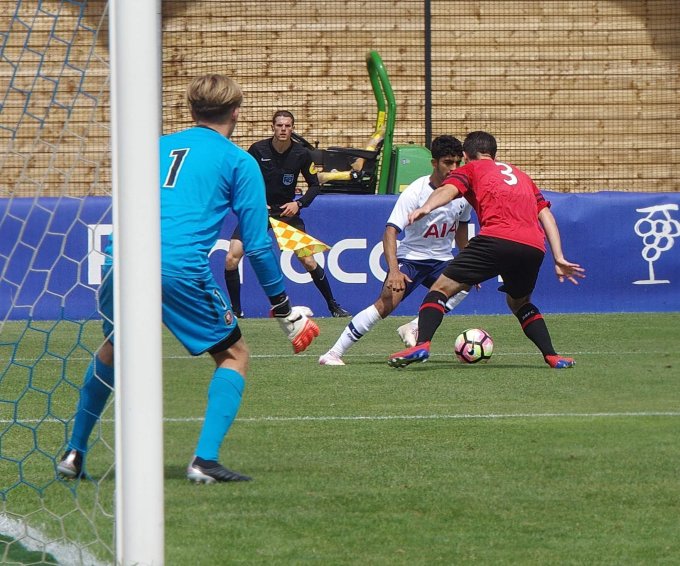 Our development sides opening game at the Tournoi Europeen got underway on Friday afternoon as Wayne Burnett’s side took on French club Stade Rennais in the first of three 50 minute group games. It was a hugely entertaining and competitive opening game on a warm summers day in Ploufragan, with both sides playing some attractive attacking football. However, it was the French club who managed to get the better of Spurs to win the game 2-1. And to be quite honest with you, they deserved to win the game. They hit the woodwork on four occasions and every time they entered our half they looked like scoring. However, Spurs were by no means bad and they too played some nice attacking football and created a number of good goal scoring chances. After starting the game well Spurs took the lead early on in the game through Kazaiah Sterling. However, Stade Rennais equalised early on in the second half to level the scores. Goalkeeper Joshua Oluwayemi was on hand to save a penalty kick from Brandon Soppy however, Stade Rennais fought back and they netted a late winner through Alan Kerouedan to secure all three points for the French club. Wayne Burnett’s side lined up in their usual 4-2-3-1 formation. Joshua Oluwayemi started in goal while a back four consisting of Jubril Okedina, Jonathan Dinzeyi, Luis Binks and Tariq Hinds lined up in front of him. Tashan Oakley-Boothe and Armando Shashoua partnered up in central midfield, as Dilan Markanday and Rayan Clarke operated out on the flanks either side of CAM Paris Maghoma. Spurs striker and captain Kazaiah Sterling led the line for the ‘ Lilywhites ‘. Stade Rennais got the game underway out on the main pitch at the football centre, and it didn’t take long for the game to gather pace. Joshua Oluwayemi had to get down early to save Brandon Soppy’s low effort from the edge of the Spurs box as both sides started the game with a good intensity about them. Wayne Burnett’s side started the game well and they were keeping possession well during the opening stages of the game.

Dilan Markanday came inside from the right flank before curling an effort narrowly wide of Elias Damergy’s goal as the quick pace to the game continued. After the hard pressing Armando Shashoua gave the ball to Rayan Clarke down the left side of the Stade Rennais box Clarke looked like he might hit the back of the net however, instead he fired the ball well over Damergy’s crossbar. Stade Rennais then came desperately close to taking the lead. After Brandon Soppy passed the ball to Georgino Rutter in the Spurs penalty area, Rutter thumped Oluwayemi’s crossbar with a powerful early strike before, Armando Shashoua did well to close down and block Malamine Doumbouya’s resulting effort from long range. Georgino Rutter forced Joshua Oluwayemi into making a decent save after he powered a low effort on goal from out on the left flank. Shortly afterwards the lively Armando Shashoua played a free kick short to Paris Maghoma on the edge of the Stade Rennais box however, the Tottenham midfielder whipped an effort narrowly over Elias Damergy’s crossbar. Stade Rennais then attacked us down the other end of the pitch through Georgino Rutter who, after advancing forward down the left flank smashed an effort off of Oluwayemi’s right hand post. The Spurs goalkeeper had been busy during the opening stages of the game and he was called into action shortly afterwards. A nice passing move saw Armand Lauriente give the ball to Georgino Rutter, who passed the ball to Brandon Soppy in the Spurs box but his effort on the turn was held by Oluwayemi. Shortly afterwards Spurs took the lead against the run of play. After Shashoua had passed the ball to Jubril Okedina out on the right flank the right fullback gave the ball to Markanday who cut onto his left foot before sending a cross into the Stade Rennais box. Markanday’s cross was met by Kazaiah Sterling who after leaping up well to meet the ball, he sent a wonderful looping header up over Elias Damergy and into the bottom left hand corner of the goal, 1-0. Malamine Doumbouya sent a dangerous cross narrowly wide of Joshua Oluwayemi’s goal shortly after the restart. The Spurs goalkeeper was then put under severe pressure by a Jonathan Dinzeyi back pass but he was able to just clear the ball in time.

Armand Lauriente blazed an effort over Joshua Oluwayemi’s crossbar before Spurs went forward down the other end of the pitch. After Jubril Okedina passed the ball to Dilan Markanday down the right flank the tricky Spurs winger  whipped the ball across the face of the Stade Rennais goal with Rayan Clarke coming close to getting something on it at the near post. Brandon Soppy fired an effort over Oluwayemi’s crossbar after running down the right side of the Tottenham penalty area, in what turned out to be the final piece of action from the first half. Spurs got the second half underway. Armando Shashoua came close to slipping Kazaiah Sterling through on goal shortly after the restart, a couple of minutes before Joshua Oluwayemi was almost robbed of the ball inside his own box by Georgino Rutter. The impressive Luis Binks then made a good sliding challenge to win the ball off of the advancing Brandon Soppy down the right flank. The Spurs defender then handled Georgino Rutter’s cross inside his own box a matter of moments later. However, the referee consulted VAR before deciding not to award the penalty kick for Stade Rennais. From the following corner kick Stade Rennais levelled. Brandon Soppy’s corner kick was met by Lorenz Assigon at the near post and he quickly rounded the man closest to him (Paris Maghoma) before firing the ball into the top left hand corner of Joshua Oluwayemi’s goal, 1-1. Emilien Waflart had a shot blocked inside the Spurs box by Jonathan Dinzeyi a couple of minutes later. After receiving Dilan Markanday’s pass Armando Shashoua gave the ball to Rayan Clarke down the left side of the Stade Rennais box, but the 18 year old fired a low effort wide of Elias Damergy’s goal. Rayan Clarke was replaced by Shilow Tracey shortly afterwards. Stade Rennais continued to put pressure on the Spurs defence. Georgino Rutter surged past Jonathan Dinzeyi before entering the Spurs penalty area and attempting to slide the ball underneath the outrushing Spurs goalkeeper Joshua Oluwayemi who managed to do well to save his effort.

Tariq Hinds slipped the ball into Kazaiah Sterling down the left side of the Stade Rennais box but the Tottenham striker slammed the ball against Elias Damergy’s right hand post. Only a matter of minutes later Jonathan Dinzeyi conceded a penalty after Jonathan Dinzeyi tripped Brandon Soppy in the Spurs penalty area. However, Soppy’s weak resulting effort was saved relatively comfortably down to his left by penalty saving specialist Joshua Oluwayemi,  as Spurs escaped punishment. The French club continued to cause Spurs problems and after Armand Lauriente gave the ball to Brandon Soppy he passed it to Georgino Rutter on the edge of the Spurs box. Rutter’s resulting low effort somehow came off of Oluwayemi’s right hand post before coming back across goal as Spurs escaped once again. Spurs had a penalty shout waived away by the referee after Rayan Doucoure tackled substitute Shilow Tracey inside the Stade Rennais penalty area. Spurs then made a double substitution as Wayne Burnett brought on Elliot Thorpe and Rodel Richards for Paris Maghoma and Dilan Markanday. Jonathan Dinzeyi did well to intercept Alan Kerouedan on the edge of the Spurs box to break down another dangerous Stade Rennais attack. Emilien Waflart then cut inside from the right flank before firing an effort on goal however, his powerful effort was bravely nodded behind by Jonathan Dinzeyi. The Spurs central defender then managed to clear Armand Lauriente’s resulting corner kick. For all of Spurs’ good defensive work throughout the match they could do nothing to prevent Stade Rennais netting a dramatic late winner in second half stoppage time. After Georgino Rutter passed the ball to Alan Kerouedan down the right side of the Spurs penalty area the winger fired an unstoppable low effort against the bottom of Oluwayemi’s right hand post. The ball then bounced into the back of the net as Stade Rennais netted a deserved late winner, 1-2. The referee sounded his whistle for full time a couple of seconds later. Spurs now have it all to do if they want to top the group. Wayne Burnett’s sides next group game is against SM Caen, tomorrow morning (kick off is at 10pm CET).

My man of the match: Dynamic central midfielder Armando Shashoua put in an excellent shift in the middle of the park for Spurs against Stade Rennais. Shashoua was a real live wire in the midfield and he poached the ball really well from the Stade Rennais players while also breaking up play and tracking back well after him. The high pressing Shashoua also made some nice crisp passes and he was often the one pulling the strings from midfield. There was not one ball that the technically gifted midfielder didn’t scrap for!