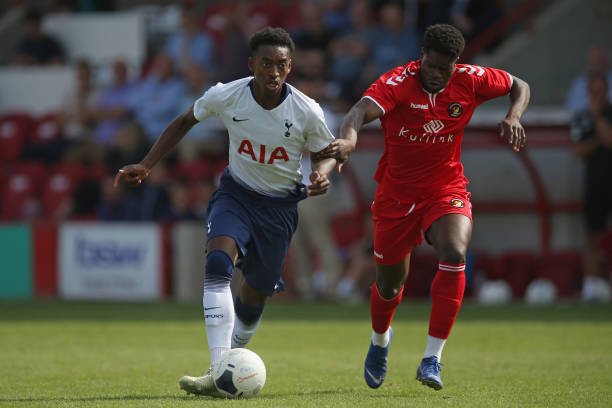 Our development sides second test of pre-season takes them south of the river to Champion Hill, where Wayne Burnett’s side will face National league south side Dulwich Hamlet. After putting in a highly competitive performance last weekend to draw 2-2 with Ebbsfleet, Spurs’ development side minus Brooklyn Lyons-Foster who was called up to the senior side for their tour of Asia will be looking to go one better when they take on the ‘ Hamlet ‘ in tomorrow afternoons game. Dulwich Hamlet are an interesting club and they finished in 14th place in the National league south last season with 49 points. The ‘ Hamlet ‘ have a number of connections with Spurs although they have never played one another, of which includes former players Peter Crouch, Peter Garland and Dave McEwen all of whom have represented both clubs. Dulwich Hamlet manager Gavin Rose has a number of players on his books who the young Spurs players will need to be wary of tomorrow. Last seasons top scorer and centre forward Dipo Akineymi is the National league south sides main danger man however, other players of note include goalkeeper Preston Edwards, wing back Nyren Clunis and defensive midfielder Quade Taylor.  Other players to look out for are Caio Guimaraes, Maggie Porter, Dominic Vose and Aryan Tajbkahsh. I am expecting another very physical test similar to the one in which we had against Ebbsfleet last week however, the quality of tomorrow’s opposition obviously won’t be as good. Just like in the Ebbsfleet game fitness levels could also be a big factor in deciding which way the game goes. In front of an almost sold out Champion Hill, Burnett’s side will be looking to overcome the ‘ Hamlet ‘ by playing their usual passing game. Once again it will provide the Tottenham youngsters with some invaluable experience and as games go this promises to be an intriguing affair. Burnett will be unable to choose a whole host of under 18’s for Saturday’s game as they are currently participating in the Eurofoot tournament out in Belgium. I would expect to see a similar Spurs side to the one which took on Ebbsfleet last week with the exception of maybe one or two changes. I shall be reporting on tomorrow’s game and I will have my in-depth match report out on Sunday afternoon. I would like to wish Wayne Burnett’s side all the very best of luck for the game. This is their last match they have before they travel out to France to compete in the annual Tournoi Europeen.

My one to watch: Dulwich Hamlet’s top scorer last season Dipo Akinyemi who scored 13 goals in the Vanarama National league south during the 2018/19 campaign.