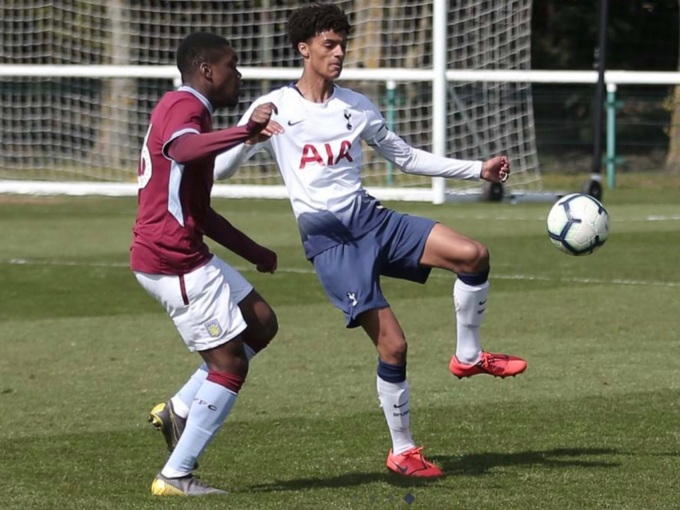 In the latest of my series on some of Spurs’ most promising Academy players I will be focusing on 18 year old, ball playing centre half Brooklyn Lyons-Foster. The Archway born defender who was seen training with the first team last month, overcame a number of frustrating injury problems during the 2018/19 season to enjoy another fine campaign for the young ‘ Lilywhites ‘. A player who I have previously written about, Lyons-Foster along with the slightly younger Luis Binks is one of the most promising young central defenders in English football at this present moment in time. For those of you who have had the pleasure of watching Brooklyn play then you will remember him for his Alderweireld-esque reading of the game, his ice cool composure in high pressure situations, and his John Stones like ability to bring the ball out from the back so effectively. Lyons-Foster has been at Spurs since he was an under 10 having previously been on Watford’s books. The second year scholar has made great strides since he signed scholarship forms back in the summer of 2017 and with the exception of a couple of unfortunate injuries the 18 year olds two years of scholarship have been highly positive on a developmental level for the defender from Islington, in North London. Not too dissimilar to a defender such as Matthijs de Ligt, Lyons-Foster plays the game as if he has been schooled at the Sportpark De Toekomst, such is the way in which he operates as a ball playing centre half. A player who loves to make positive forward passes, Brooklyn is more than just an excellent defender who reads the game so well. He is also very creative from deep and his adventurous surging forward runs make him adept at playing at CDM which he has played at on a couple of occasions last season. The 18 year old is a very mature defender who sees the danger which is in front of him. Commanding, decisive and unfazed by bullish target men despite his slim build, as I wrote last season he is another wonderful young talent who I will be going into detail on in the following piece. Despite a couple of injury problems throughout the campaign Lyons-Foster managed to make 30 competitive appearances for Spurs across all levels last season and it has meant that he has been able to get a lot of valuable playing time under his belt.

Born in Islington North London, Brooklyn Lyons-Foster has been at Spurs since the age of nine after joining us from Watford as an under 10. Having worked his way up the ranks, Lyons-Foster has often played ahead of his age group at youth level for both club and country. The highly rated defender made his debut for our under 18’s as a schoolboy in a league game against Aston Villa during the 2016/17 season, he would go onto make an additional appearance for John McDermott’s side that season to cap off a fine campaign which had also seen him represent England at under 17 level in the annual Algarve Cup. That summer Brooklyn signed his two year apprenticeship with the ‘ Lilywhites ‘. During his first year of scholarship Lyons-Foster became a key member of our under 18’s side. Often playing at LCB the classy ball playing centre half oozed both confidence and class during the first half of the season where he was easily Scott Parker’s sides best and most influential player. A mainstay in Parker’s side, Lyons-Foster’s season was prematurely ended in the March of that season after he picked up an ankle injury in the Premier League Cup final at Chelsea’s Cobham training centre. Just before he was about to link up with the England under 18 side for international duty. During the season just gone Lyons-Foster featured prominently for our under 18’s, 19’s and 23’s and the second year scholar managed to overcome a serious of frustrating injury problems early on in the season to become an important player for all three of those teams. The North Londoner would also go onto feature in a wide variety of positions during the 2018/19 campaign of which included RB, RCB, LCB and CDM. Impressing greatly across all levels for Spurs, the second year scholar put in some fantastic defensive performances against the likes of Swansea, Barcelona and Chelsea. Consistent and excellent at playing under pressure, Lyons-Foster showed over the course of the campaign that he had improved and become more mature than the 2017/18 season, and he was unlucky not to have received an England call up. In addition to his defensive contribution last season, Lyons-Foster also chipped in with a healthy three goals and two assists.

Brooklyn Lyons-Foster is an adventurous and confident ball playing centre half who looks up to the likes of Sergio Ramos and Toby Alderweireld, is like the slightly younger Luis Binks, a fantastically well rounded centre half. The former Watford schoolboy is a very attacking defender in the sense that he loves to bring the ball out from the back and even take on opposition players in the process inside his own half. He is cool, composed and elegant in his duties, always looking up and making positive forward passes something which statistically helped our under 23’s to avoid relegation to the PL2 division two last season. Defending is all about the decisive moment for Brooklyn who, always manages to time his interceptions well. He reads the game like a seasoned pro and he manages to see and anticipate danger, often waiting until the last moment before he slides in. Such decisive interceptions and challenges saved us last season in very big games. Another one of Lyons-Foster’s finest attributes is his near impeccable positioning which he manages to maintain throughout matches. The 18 year old is also good at making blocks and he is dominant in the air, always impressing me with his lovely deft and accurate cushioned headers. Furthermore, despite his slender frame the teenager is very strong in his defending and he doesn’t let bullish target men get the better of him for strength. Once again drawing comparisons with Luis Binks who he really is similar to as a centre half, Lyons-Foster is relatively two footed and as one on one defending goes he is one of the best in the business at youth level in England. To summarise him as a player he is a wonderfully well rounded centre half who has all the raw ingredients needed to become a world class modern centre back. The Islington born defender is a remarkably assured player who is fiercely intelligent and very combative. Strong in the challenge and unafraid to make big calls in big moments in games, the 18 year old who is a fantastic tackler and reader of situations is one of the coolest young centre halves in English football as I alluded to in greater detail in a piece which I wrote on Brooklyn during the 2017/18 season.

Without waxing lyrical about the young defenders qualities, he is a player who I have always been a very big fan of for the exciting, fearless and decisive nature of his defending. Brooklyn has shown time and time again that he has mastered under 18 football, now his next step is to master under 23/reserve level football for which I don’t think he is far away from doing if his performances for Wayne Burnett’s side last season are anything to go by. The pacy centre half who trained with the Tottenham first team in the run up to last seasons UEFA Champions League final, will be hoping to impress Mauricio Pochettino when the Spurs players report back to training on the 1st of July. It would be fantastic to see Lyons-Foster get a run of games with the first team in pre-season either in the ICC cup or in the Audi cup. I cannot wait to see how this hugely promising young defender gets on next season, we truly are so lucky to have him and the likes of Luis Binks on our books. Who in my humble opinion are two of England’s finest young centre halves!