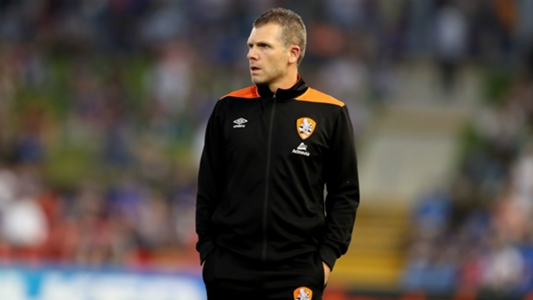 I had the great pleasure of catching up with former Spurs youth player Darren Davies  who played for the Spurs youth team during the 1990’s. Davies who is a native of the Welsh steel town of Port Talbot was a left back throughout his career and after departing Spurs in 1998 he went onto have an interesting career, playing for the likes of Barry Town, Greenock Morton, Forest Green Rovers and Redland City Devils. Since retiring from the game life long Spurs fan Davies has since made the foray into coaching and only recently he was the interim manager of Australian A league side Brisbane Roar. I caught up with Darren who now lives in Australia, as he looked back on his younger years at Tottenham Hotspur and life at one of England’s biggest clubs. Darren is a man who has a very bright future in management.

Darren: One of my earliest memories was within the first week, the club had signed Jürgen Klinsmann and four or five of us apprentices who were away from home and in digs had to have a mini training session with him and Ossis Ardiles, in the old ball court at White Hart Lane one afternoon, to present him to the worlds media.

It was insane the amount of media around him at that time and for us apprentices a little surreal. I’d only finished school in South Wales the Friday before and here I was thrust into that scenario, unbelievable but certainly life changing. I was captain of the Wales U15 schoolboy side and a lifelong Spurs fan! I had opportunities to join quite a few other clubs but once Tottenham showed interest there was never any other place that I wanted to go.

Darren: I thoroughly enjoyed it. I feel very honoured to have spent the years I did there and the football opportunity and life experience it gave me. It gave me huge life learnings to take forward with me and as far as a football education is concerned it instilled a belief and passion of how the game should be played and a playing philosophy I believe in, to take with me in my playing and coaching career.

Darren: Paul Gascoigne! But I could name them all, I was Tottenham daft! The only record I ever bought with my pocket money as a kid was Chas & Dave!

Darren: Gerry Francis as he was the manager who gave me both my professional contracts after graduating as an apprentice. The youth team coach then was Des Bulpin who was great to me and Chris Hughton who was then reserve team coach, was also very good to me. The senior players at the club then also had a massive influence on me as a person but particularly now in my coaching career were people like Gary Mabbutt, Teddy Sheringham, Nicky Barmby, Colin Calderwood, Justin Edinburgh, Dave Kerslake, Dean Austin, David Ginola, Sol Campbell and the list goes on. The way those senior players treated us youngsters, the way they looked after us both on and off the pitch, the help they gave us, it taught me huge lessons in how to educate, protect and develop young players in all aspects. Fantastic people!

Were there any other players at the club or outside, who you would model your game around?

Darren: Not really. Of course I watched football and wanted to learn as much as I could from as many people as I could. That’s why, as I say each and every senior player there contributed to something I have taken forward with me.

Darren: It’s obviously a huge club but it was very difficult to break through as a home grown youngster, especially at that time with the quality foreigners we had.

But I regret nothing. I gave everything and Tottenham gave me so much.

The pedigree that I obtained from being there, the playing style and philosophy that I had instilled in me which was in the clubs DNA enabled me to forge a career away from White Hart Lane, travel the world, and now currently live in Australia, working in a fantastic country in a league that will only continue to grow and get better.

Were there any youth players at Spurs who you were particularly close to and are you still in touch with any of your former team mates?

Darren: I have occasional contact with a number of former Spurs colleagues yes. Social media is a wonderful thing sometimes. But Paul Mcveigh is without doubt the one I keep in most touch with. He is without doubt one of my best friends in football, we regularly FaceTime and he visited me in Australia a couple of years ago and only last summer we enjoyed a few pints of Guinness in Dublin with his brother.

Captaining the Tottenham youth team is something I am also very proud of.

The FA premier league youth cup final against Arsenal and league cup win at White Hart Lane over Norwich, after which Gerry Francis offered me my very first Professional contract, are probably standouts.

Darren: I went back to South Wales initially, and played for Barry Town in a very successful team including in the Champions League, I then moved to Scotland to Greenock Morton to play in what is now the Championship, before a number of years in the Conference with Dover Athletic and Forest Green before finishing my playing career at Tiverton, Merthyr Tydfil and returning back to the league of Wales with my hometown club Port Talbot.

What was the pinnacle of your footballing career

Darren: It has to be representing Wales. I am a very proud Welshman and I was

privileged to captain and represent my country at all levels up to and including U21.

Darren: Too tough to choose! Teddy Sheringham, Jürgen Klinsmann and David Ginola were all unbelievable footballers!

Darren: Embrace and enjoy everything! Every moment is a learning moment and don’t have any regrets about not giving your very best! If you give your best and apply yourself properly, whatever happens, it will stand you in good stead for your future.