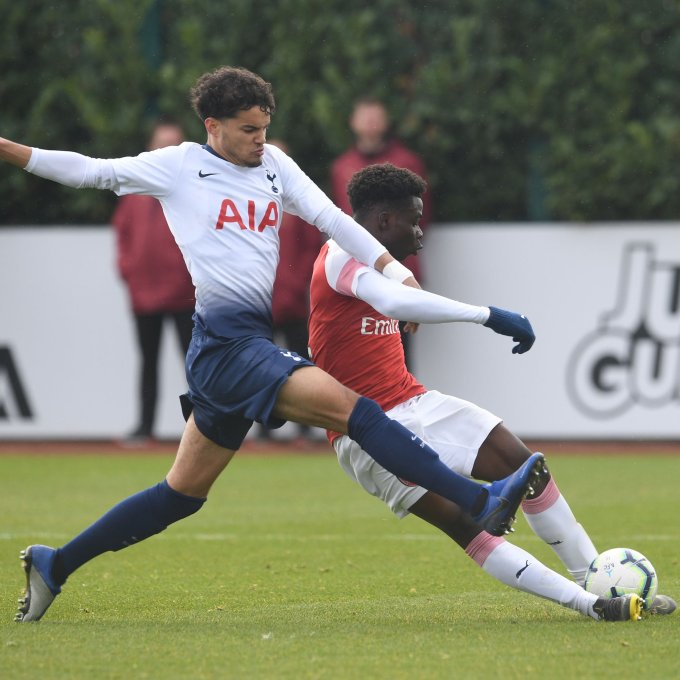 Regardless of what happens in our under 18’s final league game of the 2018/19 season, the wonder boys of Hotspur Way should all be extremely proud of what they have achieved during the current campaign. To go almost a whole season unbeaten in the league is something, but to play the kind of football that our lads have over the course of the season has been something else. The high tempo with which Matt Wells’ and later John McDermott’s side have played has been astonishing. The lads fitness levels, skill and in game management are just some of the things which have made them such a pleasure to watch and report on. However, they have played so well as a team throughout the current campaign and it is that togetherness along with the obvious quality that the lads possess which has made them such a formidable team to play against. John McDermott’s side are still in with a chance of clinching the Premier League South title on Saturday afternoon when they welcome Leicester City to Hotspur Way. However, McDermott’s side will be relying on their arch rivals Arsenal dropping points when they take on Fulham at their Motspur Park training ground. Although Arsenal have been winning games for fun this year there is still a good chance that they could fail to beat the ‘ Cottagers ‘ who have lost just one home league game this season. That match kicks off half an hour earlier than ours at 11 AM so unfortunately I will be constantly checking live score updates on my phone during the match, hoping for a miracle to occur! Without dwelling on Arsenal’s game, the young Spurs players will be solely focused on this Saturday’s opposition. Trevor Peake’s Leicester City side haven’t had the best of seasons but even though they lurk in eighth place in the league table, they will be no pushovers for McDermott’s side who will be desperate to win the game despite the fact that they will be missing a number of key players. Leicester are a well structured side and they proved difficult to break down during the reverse fixture back in December at their Belvoir Drive training ground when we beat them 4-0, thanks to an inspired performance from Troy Parrott.

Some of the ‘ Foxes ‘ key players include defender Ed Elewa-Ikpakwu, centre forward and top scorer this season with seven goals Dempsey Arlott-John, and midfielder Sidnei Tavares. I would like to wish all of the Spurs lads all the very best of luck for our final league game of the 2018/19 season on Saturday. Arsenal’s under 23’s are playing a PL2 game the night before so Ken Gillard’s side could be without key players Bukayo Saka and Xavier Amaechi’s for Saturday’s game against Fulham. That on top of the fact that Fulham have been so difficult to beat at Motspur Park this season should fill us all with hope. I will be reporting on Saturday’s game and my in-depth match report shall be out late on Saturday night. I continue to believe!

My one to watch: The ‘ Foxes ‘ centre forward and top scorer at this level this season with seven goals – Dempsey Arlott-John.