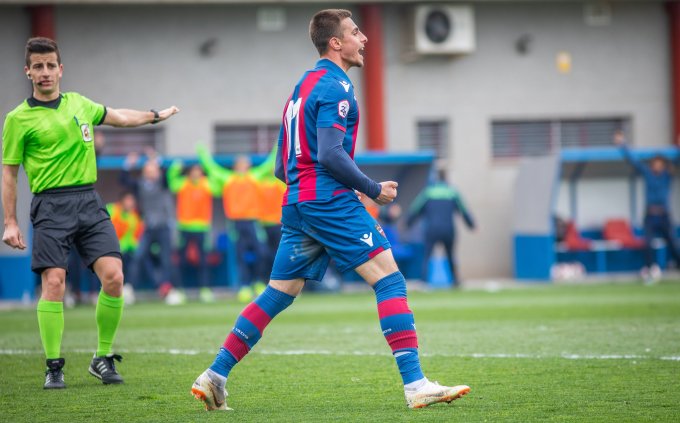 Spurs loanee Anthony Georgiou completed the second half of Atlético Levante’s 2-1 home defeat to league leaders Atlético Baleares, in the Spanish Segunda Division B Group III on Saturday afternoon. Georgiou would have started today’s game at the Ciudad Deportiva De Buñol but for a hamstring injury which he picked up during Levante’s previous game. This was a special game for the Cypriot international who was reunited with his Tottenham teammate Samuel Shashoua who is as we all know, one of Atlético Baleares’ most important players. Anthony’s introduction brought with it much needed pace to Luis Tevenet’s side and his positive and purposeful runs down both the left and right flanks helped to create a number of good chances for the home side, who started the second period with a two goal deficit to over turn. After replacing Eneko at halftime Anthony started the second half out on the left wing. Soon after coming on Levante fullback Rulo won a free kick out on the left flank. Anthony elected to take the resulting free kick but his ball into the Atlético Baleares penalty area was cleared away by Rubén. A couple of moments later Georgiou was shown a harsh yellow card by the referee for pulling back Kike inside his own half. A couple of minutes after Levante had a goal ruled out for offside, the ‘ Granotas ‘ managed to pull a goal back through Cantero, and our very own Anthony Georgiou played a part in the goal. After picking the ball up on the left flank Anthony cut inside onto his right foot before picking out Shaq Moore with a lovely floated pass out on the opposite flank. Moore took the ball into the oppositions penalty area before crossing the ball into Cantero who leapt up before planting a header into the top left hand corner of the goal. Anthony had made a similarly impressive pass to Joan out on that same flank just a couple of minutes earlier. Following Cantero’s goal Levante started to put a lot of pressure on the ‘ Balearicos ‘ defence. Anthony continued to be involved in the game and after receiving Shaq Moore’s pass inside the middle of Atletico danger zone the 22 year old had a shot on goal. Georgiou had done well to steady himself in a crowded space before letting fly on his right foot.

The Lewisham born wingers effort on goal was blocked by Villapolos, Georgiou then raced to meet the loose ball and he did well to latch onto it but he was met by three ‘ Balearicos ‘ defenders who were able to block his second shot behind for a corner kick. Anthony took the resulting corner kick but his whipped delivery was headed away Villapolos, but only to Arthur Molina on the edge of the box and Molina’s rushed effort was blocked once again by an Atlético player. A couple of minutes later Georgiou whipped another dangerous corner into the visitors penalty area but after an initial lack of communication from the Atlético defenders, it was eventually cleared away. Anthony had now switched out onto the right wing. After picking the ball up down the right channel the speedy young Spurs man drove forwards with the ball before he was intercepted by Peris on the edge of the danger zone. Interestingly it looked as if Peris didn’t win the ball and as a result of this Georgiou looked up to the referee for a free kick however, nothing was given. Levante were trying their very best to find an equaliser and it was the energetic Anthony Georgiou who was proving to be one of the ‘ Granotas ‘ most dangerous players. A couple of moments after having a corner kick cleared away by the oppositions defence, Georgiou drifted inside from the right flank before curling the ball into the danger zone however, it was gathered by Atlético goalkeeper Carl Klaus. Some impressive skill and strength from Georgiou out on the left flank resulted in him winning Levante a free kick in a promising position. Anthony played the remainder of the game out on the left flank however, he was unable to help Levante find an equaliser and Luis Tevenet’s side suffered their second consecutive league defeat. Although Anthony was probably not 100% fit going into this game as he didn’t train the previous day, he still looked remarkably sharp and without exaggerating I thought that he was the player who really sparked Levante back into life during the second half, such was the positivity in which he brought to the game.

Anthony was arguably one of Levante’s most influential players during the second period with his many penetrating forward runs, fancy foot work, good movement and his ability to create chances all helping Luis Tevenet’s side to mount a second half comeback. The energetic young winger played his part in creating Cantero’s goal early on in the second half and he went onto create a number of decent chances throughout the remainder of the match. I greatly admired Anthony’s great desire to impact Saturday’s game and that alongside his tireless defensive work and versatility made it a very positive afternoon for the young man from South London. I am sure that both Anthony and Samuel enjoyed catching up with one another after the game.