Some notes on Spurs loanee Anthony Georgiou’s performance against Badalona: 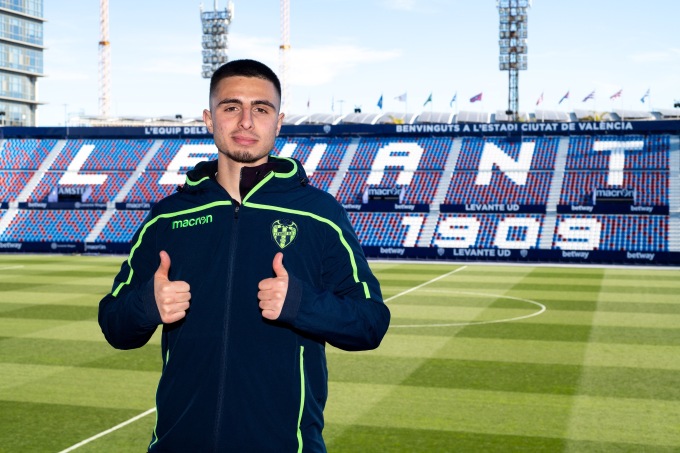 Our 21 year old Academy graduate Anthony Georgiou made his debut for his loan club Atlético Levante on Sunday afternoon, after he came on from the bench in their 2-1 home, league defeat to Badalona in the Spanish División B – Grupo III (the third tier of Spanish football). The Cyprus international had a bright cameo for parent club Luis Tevenet’s side, and the hardworking winger proved his versatility after he came on, after he was forced to play out on the right wing in a 4-2-3-1 formation. Georgiou’s appearance against Badalona at the Ciudad Deportiva De Buñol, was only his second ever competitive appearance in men’s club football. The Lewisham born wide man only arrived in Valencia last Saturday but he already found himself in the match day squad for Levante’s B team on Sunday afternoon. And the speedy and direct winger wasn’t afraid to bomb forward down the right flank as he tried to help Levante to get something out of the match, after he being introduced in the 64th minute of the game. In the following short piece I will be going through Georgiou’s positive cameo on his debut for the Spanish club. The ` Granotas ‘ were trailing by one goal to nil when the Tottenham loanee was introduced to the action in the 64th minute of the match. However, a matter of minutes after the 21 year old replaced Alberto Quintana out on the right wing the visitors doubled their advantage through Marco Chaco. It’s worth noting that Georgiou had tracked back all the way into the Levante penalty area to try and stop Chaco from scoring. The Londoner looked sharp and alert out on the right flank and he was linking up well with right back Shaq Moore down that side of the pitch. Levante’s number 16 (unfortunately I couldn’t get hold of a team sheet) came close to pulling a goal back for Luis Tevenet’s side before Georgiou went on his first attacking foray down the right flank. After receiving the ball the pacy winger surged forward down the flank before cutting inside onto his left foot and attempting to pick out Eneko Jauregui in the penalty area by delivery a whipped cross into the danger zone. However, his ball in to the penalty area was cut out by a Badalona defender just in the nick of time.

Shortly afterwards the ` Granotas ‘ pulled a goal back in some style through Eneko Jauregui’s long range pile driver into the top left hand corner of the goal, on 77 minutes. Following Jauregui’s goal the home side started to get forward a lot more and Georgiou was providing the team with an outlet down the right channel. After cutting inside onto his favoured left foot, the Cypriot international floated a promising ball into the danger zone, which was knocked down by Jauregui to Levante’s number 16 in the box, but he was unable to test the goalkeeper and he was quickly intercepted by a Badalona defender. A couple of moments later Shaq Moore played the ball down the line to Georgiou who cut inside from the right wing before darting into the penalty area where he attempted to beat the oppositions number four with some fancy footwork. However, Georgiou was tripped by the Badalona man who stuck out a leg to prevent him from coming inside any further, but the referee astonishingly deemed Anthony to have dived, and he was given a yellow card, much to his disbelief. If like me, you have seen a lot of Georgiou over the years then you will know that he isn’t the type of winger who will go to ground without significant contact being made. Following his booking Georgiou continued to play with a positive energy about him, and he was getting himself into some really promising positions down the right flank as well as linking up well with fullback Shaq Moore. The youngsters passing was also nice and crisp, and his movement in and behind the Badalona left back was causing him to become unsettled. After he picked the ball up down the right wing Georgiou cut inside once again before whipping another teasing cross into the oppositions penalty area however, it was headed away by Badalona’s number five. Anthony continued to get up and down the right flank well and his defensive contribution to the game to help out Moore, who was getting forward a lot was really helping out the Levante defence. The home team conceded a cheap penalty in stoppage time however, the ` Granotas ‘ goalkeeper managed to deny Badalona’s number two from the penalty spot. The Spurs loanee thought for a moment that the referee had given him his second yellow card a couple of minutes later however, after a quick clear up the referee clarified that it was in fact intended for one of Georgiou’s teammates for a handball offence.

During the final moments of the game Levante pushed almost all of their players up the pitch as they tried to find a late equaliser. After doing well to keep in Shaq Moore’s pass down the right wing, Georgiou sent a hopeful low cross into the Badalona box, but it was cleared away by one of their defenders. The Cypriot’s delivery from the resulting corner kick was also cleared to safety by a Badalona player, and the referee blew the final whistle a matter of seconds later. Although it may appear from my article, that Georgiou wasn’t heavily involved going forward that simply wasn’t the case. The winger was a bright spark for Luis Tevenet’s side after he came on, and he put in a typically positive and workman like shift down the flank. This was only a short cameo from Georgiou but there were a lot of positives that you could bring away from the 21 year olds performance, and there were plenty of promising signs from his short cameo that Georgiou will become a very important player for the Valencia based club over the coming weeks and months ahead. Anthony looked nice and sharp down the right flank, and he looked lively both in and out of possession. The former Watford schoolboy showed good awareness and his positioning and movement down the right wing was as impressive as always. Despite the fact that he was playing out of position he didn’t change his game or his style of play, and he made sure that he went on some purposeful surging runs. He also looked to put the ball into the danger zone at almost every opportunity, and he would often cut inside onto his left foot to make sure that he could put in his very best deliveries. Furthermore, the youngster covered well for Levante’s American fullback Shaq Moore in defence and he allowed the attack minded Moore to overlap him on several occasions down the wing. For all of the promising attacks that Georgiou embarked on and his link up play with Shaq Moore, once again it was his defensive discipline and willingness to track back after him and how quickly he was able to get back after him, that really impressed me today. Considering the circumstances I thought that Georgiou did really well for his parent club on his first appearance for the ` Granotas ‘ and I was very proud of how he conducted himself out on the pitch. I would like to thank Levante for providing such an excellent stream of today’s match. Up next for Anthony and Atlético Levante is an away league match against Lleida next Sunday afternoon. The Tottenham loanee will be hoping that he will make his first start for the club in that game. Unfortunately it appears that, that match will not be streamed. I would also like to congratulate the Cyprus international on making his debut for Atlético Levante on Sunday afternoon, and I look forward to following his progress over the coming months.