Some notes on Spurs loanee Samuel Shashoua’s performance against Sabadell: 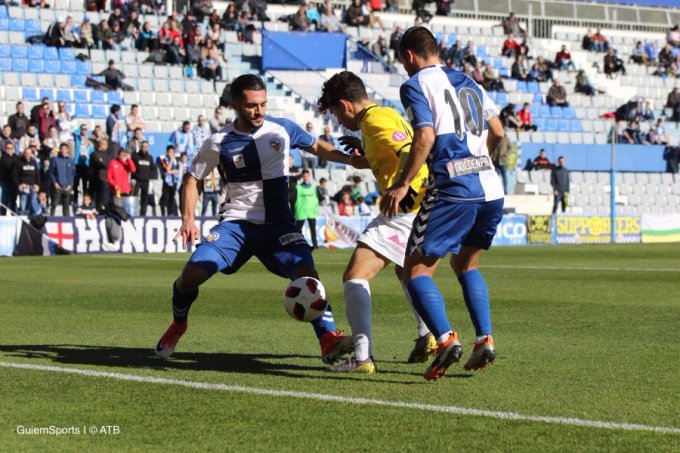 Spurs loanee Samuel Shashoua made his 20th competitive appearance of the season for his parent club Atlético Baleares on Sunday morning, in their league game away to Sabadell. It may have been a dour 0-0 draw with very few meaningful chances at either end of the pitch however, it was the 19 year old left winger who was the shining light from what had been a pretty poor match. And with the exception of Atlético’s goalkeeper Carl Klaus who had made a string of fine saves, Samuel was the man of the match on Sunday. Once again the left winger was the most creative player on the park, and it was his tireless work at both ends of the pitch which helped the Balearic club to achieve an important point, a point which lifts Manix Mandiola’s side into second place in the Spanish Segunda Division B Group III table, only three points behind league leaders Villarreal B. I watched the vast majority of Atlético’s encounter on Sunday morning on my way down to Brighton’s training ground to watch our under 23 match. However, I decided to rewatch the whole game last night, and I am glad I did as it made me appreciate what a great shift Shashoua put in for the team. Samuel started the game out on the left wing in a 4-2-3-1 formation for Manix Mandiola’s side. The Spurs loanees first involvement in the game arrived early on, after he had received the ball down the left flank. Shashoua then cut inside onto his right foot before side stepping his way past two Sabadell players and giving the ball to Francesc Fullana in a promising position however, nothing amounted from the attack. Shortly afterwards Samuel made a clever ghosting run towards Sabadell goalkeeper Roberto’s near post, after Fullana had made a good run down the left side of the penalty area however, he had failed to pick out the teenager. Samuel then whipped a menacing ball into the box from the resulting corner kick but it was cleared by Sabadell defender Pajarero. Shashoua’s movement and positioning during the early stages of the game had been very impressive, and it was causing quite a few problems for the Sabadell defence.

After Marcos De la Espada had managed to pick out Samuel with a nice lofted pass down the left side of the Sabadell box. The winger then managed to pick out Yelko at the back post with a similarly impressive lofted pass. He knocked the ball down for Fullana whose powerful low effort was saved comfortably by Roberto. Shashoua was managing to get involved in the game despite how quiet both sides had started the match. After receiving Fullana’s pass down the left wing, the tricky winger darted down the line before zig zagging his way inside and travelling with the ball and passing to Canario, but he was unable to get his shot away and the ball ended up going out for a corner kick. Shashoua’s resulting delivery from the corner was comfortably claimed by Roberto, the Londoner was proving to be the most threatening player in the first half. After Canario had shifted the ball out to Samuel on the left wing he tried to whip the ball into the danger zone, but his cross was blocked by Oscar Rubio. However, the ball came back to Shashoua who shimmied his way around Rubio before picking out De la Espada in the centre of the box, but the striker got the ball stuck under his feet. Straight from that Atlétcio attack Samuel could be seen tracking back down the left flank and he did very well to cut out a dangerous Sabadell attack, after he managed to get in front of the advancing Felipe to win the ball off of him. A couple of minutes later Samuel made another important defensive contribution to the game, after tracking back down the wing enabled him to get in front of the pacy Domínguez after he had got on the end of a flick, before bursting forward down the channel. Samuel not only managed to get in front of the Sabadell winger to intercept him, he also managed to win a free kick in what was to be his final contribution of the first half. The second half was even more dour than the first and neither team was able to really test either goalkeeper.

After Canario had pumped the ball into the Sabadell penalty area defender Nico managed to head it clear but only towards Samuel who connected with the ball first time, before volleying over Roberto’s crossbar. His side footed effort on goal wasn’t a million miles away from going in, and once again he had showed good technique to connect with the ball so sweetly. He managed his first effort on goal of the game a couple of minutes later. After intercepting Néstor’s pass Samuel gave the ball to De la Espada on the edge of the Sabadell box but his shot on goal was blocked by a Sabadell defender. Shashoua was able to pick up the loose ball before pulling off a sublime Marseille turn to get away from Oscar Rubio. He then swivelled around and managed to hold off Pajarero before continuing into the box, and then having his powerful low effort on goal saved by Roberto. Samuel’s next involvement in the game came some ten minutes later after some good work from Nuha to keep the ball in down the right wing, before continuing forward and pulling the ball back to Shashoua in the middle of the Sabadell penalty area. However, Samuel appeared to be clipped from behind by a Sabadell defender and his first time effort went high and wide of Roberto’s goal, a quiet spell in the game followed. After Nuha had passed the ball to Samuel on the edge of the oppositions penalty area, he cut inside onto his right foot before attempting to find the top right hand corner of Roberto’s goal from his thumping effort. However, the Sabadell goalkeeper made a smart diving save to beat the ball away, and Nuha ended up blazing over on the follow up, it was the closest that Atlético had come to finding a late winner. However, in a desperate late attempt to break the deadlock Shashoua went on a purposeful run after cutting inside from the left flank, he then side stepped his way past two Sabadell players before continuing forward however, much to Samuel’s anger he had his shirt pulled from behind by Adri, just as he was about to pass the ball to De la Espada, this resulted in the referee awarding a free kick to the visitors.

After the final whistle had been sounded, Shashoua fell to the floor in exhaustion. The talented Spurs man had given his all against Sabadell and it was yet another performance of such high quality from the 19 year old, who was the most potent attacking player on the field by a distance. Apart from his zig zagging runs, sublime Marseille turn, first class positioning and movement in and around the oppositions penalty area, there was so much more to be admired about Samuel’s performance. I might sound like a broken record but his defensive contribution is so, so good and on Sunday he showed it again and it really helped Atlético’s left back Peris. This was another very good performance from Shashoua in a game which lacked so much in quality. Up next for the 19 year old and Mandiola’s inform side is a home league game against Peralada on Sunday, at the Son Malferit.