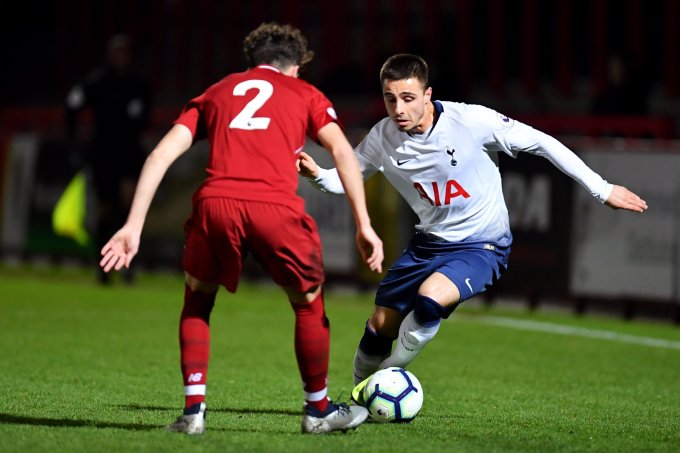 Transfer deadline day was in full swing on Thursday evening when Spurs announced that our promising young winger Anthony Michael Georgiou had joined Spanish La Liga club Levante U.D. on loan until the end of the 2018/19 season. This news will have been of great interest to followers of our youth teams and development side, and of course myself as Anthony Georgiou is my favourite Spurs player as you will already have known. Although the 21 year old who has featured eight times for our development squad this season, has officially joined Levante’s first team it is to my understanding that he will in fact link up with their B team Atlético Levante. Fascinatingly the ‘ Granotas ‘ second team ply their trade in the Spanish Segunda Division B group III, the same league that fellow Spurs loanee Samuel Shashoua plays in for Atlético Baleares. However, this doesn’t mean that Anthony cannot get into Levante’s first team during his loan spell and I wouldn’t at all be surprised to see him get minutes in La Liga over the coming months. Although he will turn 22 at the end of this month this is the Cypriot internationals first ever loan. And it will provide the hardworking left winger with the invaluable experience of playing competitive men’s football in the third tier of Spanish football on a weekly basis. A league which has already proved to have been so beneficial for young Samuel Shashoua this season. Since his days as a scholar at Spurs came to an end back in 2015, the Tottenham Academy graduate has enjoyed an eventful four seasons for the clubs development side however, some of those seasons were made very difficult for Georgiou who has suffered some unfortunate injuries. After establishing himself as a regular for what was then known as the under 21 side, during the 2015/16 season where Georgiou impressed at both LB and LW. The one time Watford schoolboy who was released by the ‘ Hornets ‘ prior to joining Spurs, had a far from ideal 2016/17 season. After putting in some bright performances during the early stages of the campaign, the second year pro suffered a serious injury which ruled him out for much of that season and in total he only made six appearances for the under 23’s.

However, the resilient youngster came back stronger than ever from that particular leg injury, and after impressing Pochettino in pre season he was included in the Spurs squad that travelled to the United States for the ICC cup. And it was after one particularly promising performance in a friendly against Italian side A.S. Roma, which seemed to open the door to the first team for the Lewisham born winger. And it was the 2017/18 campaign which was really a breakthrough season for the tireless wide man. Georgiou made his first team debut for Spurs in a UEFA Champions League game against APOEL Nicosia in his native Cyprus, he also featured on the bench for the first team on a couple of other occasions. The speedy and direct winger also ended the season as a full international for Cyprus after winning two caps in international friendlies against both Montenegro and Jordan respectively. After putting in a series of impressive performances for our first team in this campaigns pre season tour of the United States, the 21 year old ended up starting our under 23’s first two PL2 games of this season. And it was after he put in a heroic performance up at Anfield against Liverpool in August, at left wing back, that I assumed he would end up going out on loan before the summer transfer window shut. However, Anthony suffered another injury set back shortly after that Liverpool match and it ruled him out of action until mid December. Since returning from injury Georgiou has put in a string of excellent performances for Wayne Burnett’s development side, at both left back and as an out and out winger. The amount of effort that Georgiou has put into every single one of the PL2 matches that he has played in since his return from injury, has been astonishing. He tore the Liverpool defence to shreds with his skill and speed in a game last month, before going onto cause the likes of Norwich, West Ham and ironically Athletic Bilbao B major problems. However, the Cyprus international from a defensive point of view has also been top class. With his tireless tracking back and willingness to help out and to provide cover for whoever is playing at left back. From my in-depth match reports you’ll have seen just how much I have praised Georgiou for the well roundness of his performances, but none of that is new.

Upon hearing the news of Anthony’s loan move to Valencia based La Liga club Levante, I was absolutely delighted for him. In my opinion as somebody who has watched a great deal of the Spanish third division this season because of Samuel Shashoua, I think that playing in such a competitive environment is something which will be so beneficial to Georgiou, even if that is for a B team or reserve team. This league is a very feisty one and while the players do play a different brand of football to what Georgiou will have been used to at Spurs, this whole new environment will provide him with that experience of playing against mens teams on a week to week basis. The third tier of Spanish football has its fair share of amateur dramatics and off the ball drama, but 90% of the teams that I have seen so far this season play positive and attacking football. This is something which will suit Anthony’s direct and purposeful runs down the left flank, and it should result in him getting a fair few assists and goals throughout the remainder of the season. I have been doing a fair bit of research on the ‘ Granotas ‘ second team Atlético Levante since Anthony’s loan move was announced. As previously mentioned Levante’s B team ply their trade in the same league as fellow Spurs loanee Samuel Shashoua does, the Spanish Segunda Division B group III. However, the Valencia based club actually play their matches in a town called Buñol some 40 km to the west of Valencia at the Ciudad Deportiva de Buñol. I believe that the stadium is a part of Levante’s training ground. If my research is correct the side usually lineup in a 4-2-3-1 formation and the good news for young Anthony Georgiou is that they only have one other left winger on their books, in 23 year old Spaniard Manuel Viana. Luis Tevenet’s side currently sit in 12th place in the league table and they are only three points away from the relegation zone. I really do believe that Georgiou will thrive for the ‘ Granotas ‘ during this loan spell there, and there are a number of reasons why I think this. One big reason is his adaptability to games, but there are so many other qualities that the former Watford schoolboy has which will help Levante out over the coming months.

Over the last month Georgiou has looked really sharp for our development side, and it has been his blistering speed and driving runs down the flank which throughout his time in the youth ranks, has always managed to unsettle teams and cause issues for the oppositions defence. His speed, skill and close ball control have always made him a very dangerous attacker but the ridiculously hard working winger will offer Levante so much more. He is a very intelligent and traditional winger who times his runs well and is good at creating space out on the left flank. The accuracy and pace of his crosses is also something which will come in useful for Luis Tevenet’s side, as will his willingness to track back after him and help out the defence. These are just some of the talented wingers qualities which will only improve when he gets the opportunity to play on a regular basis for Levante’s B team, and hopefully their first team before the end of the season. I have a really good feeling about this loan move for Anthony and I’m optimistic that it will really help his development as a young and ever maturing winger. I have sung Georgiou’s praises for many seasons now and as I have previously explained he reminds me so much of Ireland international James McClean in regards to his movement, graft and unrivalled work rate. Anthony is an exceptionally hardworking player who has bounced back stronger, time and time again from injury. He is the perfect Pochettino player in so many ways and I still strongly believe that he will be the long term successor to Danny Rose at left back, at some point in the future. In the meantime the 21 year old will be hoping to get plenty of game time out in Spain to help him push back into the first team fold when he comes back to Spurs for the beginning of the 2019/20 season. I will be posting regular updates on my Twitter account about Anthony’s involvement with Atlético Levante over the coming months, I will also be writing regular reports from his games in the third tier of Spanish football. The Cyprus international is a model professional and a very talented young winger who has already shown his old club Watford what a big mistake they made when they let him go as a schoolboy. Anthony is an absolute credit to Tottenham Hotspur and I would like to wish him a very successful loan spell in Spain. I think it should also be mentioned that this a very brave move for Anthony to make. To go to a different country with a completely different footballing culture is something which should be greatly admired. I am hoping to make the Atlético Levante game against Samuel Shashoua’s Atletico Baleares in April.

Anthony Georgiou for our development side this season: