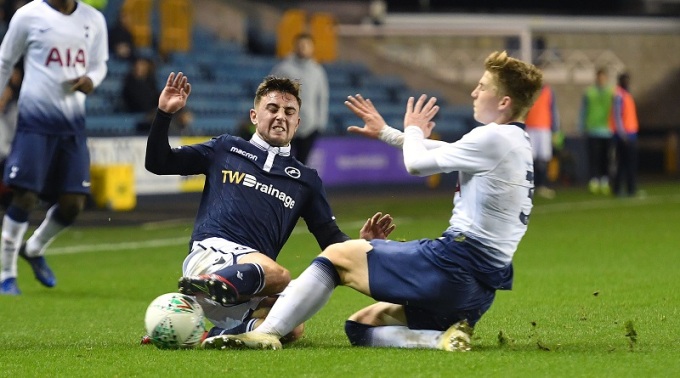 Matt Wells unbeaten under 18 side will return to league action on Saturday when they take on Swansea City at Hotspur Way, in their first game of 2019. Saturday mornings encounter with the ‘ Swans ‘ will be the third time that Spurs have met the South Wales club at under 18 level this season. The previous two meetings have resulted in comfortable victories for Matt Wells side. Swansea who are co managed by both Anthony Wright and Jon Gray currently languish in 11th place in the under 18 southern division after a poor start to the 2018/19 season. Swansea have picked up only two wins from 16 games in all competitions this season and unlike Wells‘ side they have struggled to find the back of the net, and they have scored fewer goals than anybody else in the league this season. Our high flying under 18’s thrashed the ‘ Swans ‘ 5-1 at their Landore training centre back in August, before then going on to beat them 3-1 in the Premier League cup in November of 2018. That was a much closer game of football but this was mainly down to the fact that Matt Wells didn’t field his usual side which he would start in league games. Some of Swansea’s most talented young players includes midfielder and top scorer this campaign Owen Evans, forward Shaquille Wynter-Coles who scored against us in our 3-1 win over Swansea in November, and midfielder Arnor Borg Gudjohnsen. Gudjohnsen is the half brother of our former player Eidur. Like a lot of the sides who are down at the bottom of the table, Swansea are a well organised and defensive team who are not too dissimilar to Leicester in how they set up to play. However, like Graham Potter’s senior team they can also play some nice attacking football from what I have seen of them this season. This will be Spurs’ first competitive match in two weeks and it is one in which they’ll be hoping to record a fairly comprehensive victory in. And if Matt Wells plays a similar side to the one which defeated Leicester 4-0 in our last league game, then you would have to fancy Spurs to continue their excellent form by recording a win against the Welsh club.

After the Christmas break it will be interesting to see how Spurs lineup for the visit of Swansea on Saturday morning. As always with this richly talented under 18 side it promises to be an exciting match, and hopefully it will be our lads first victory of 2019. After missing out on our last under 18 match to injury captain Armando Shashoua will be hoping to return for Saturday’s league game. As always I shall be reporting on the match and I am really looking forward to the game. I wish all of Matt Wells lads the very best of luck for their first game of 2019.

My one to watch: Swansea winger Mason Jones-Thomas is a talented player who likes to take players on down the flank. The Wales under 19 international is a good dribbler and a hard worker off the ball, and he is also a good crosser of the ball.