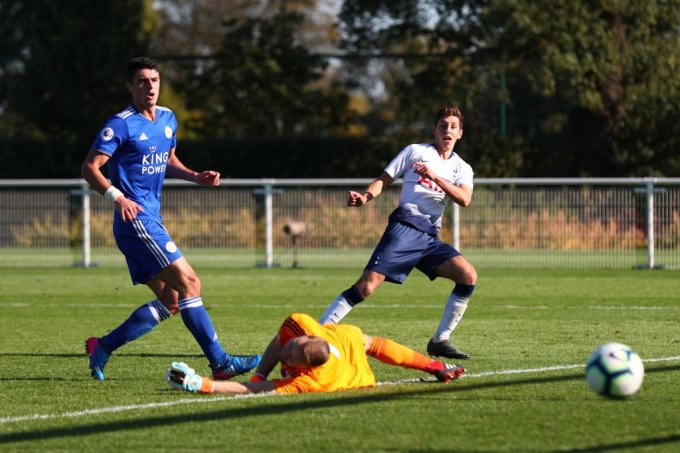 Wayne Burnett’s development side return to league action on Friday when they travel to Aldershot to face Chelsea in the PL2. Our under 23’s last two league games have ended in disappointing defeats to both Derby and Swansea respectively. However, an extremely positive performance against Portsmouth in the Checkatrade trophy last week, albeit it with a whole clutch of under 18 players, will help to boost Spurs’ confidence ahead of their trip to the EBB stadium on Friday. Chelsea’s under 23’ side who are managed by Joe Edwards have enjoyed a good start to the 2018/19 season. The ‘ Blues ’ have won five of their ten PL2 games this campaign, and they sit in a healthy third position in the division one table. Chelsea have been our old nemesis in youth football since the early 1960’s and over recent seasons the ‘ Blues ’ have produced some really exciting young players. Burnett’s development side contested two enthralling matches with Chelsea last season, the first one was a narrow 3-2 defeat at Hotspur Way. The reverse fixture was a most memorable game of football at Stamford Bridge, as two spectacular free kicks from our former player Keanan Bennetts helped Spurs to a 2-1 win which secured their division one status. Fridays game comes at a particularly interesting time as our under 18’s are in action against Arsenal the following morning at Hotspur Way, in a hugely important league match. This is interesting because it could mean that some of our development side regulars such as Oliver Skipp, Jamie Bowden and Paris Maghoma could drop down to the under 18 side for the north London derby. If that were to be the case then it would mean that Burnett would have somewhat of a dilemma as to what team he will field against the ‘ Blues ’ the night before. After all Friday nights match is another London derby.

The recent international break could also force the Tottenham coaches into shuffling the squad around for the visit to the EBB stadium. A number of our young lads were called up for their respective countries over the last two weeks and some may be suffering from a bit of fatigue after playing multiple games in quick succession. Chelsea’s youngsters have recorded some impressive wins in the PL2 this season, they have also managed to qualify for the knockout stages of the Checkatrade trophy. Known for playing an attacking brand of possession based football, the West London club have been the dominant force in youth football over recent seasons although that has mainly been at under 18 level. Some of Joe Edwards’ most influential players are speedy and unpredictable winger Callum Hudson-Odoi who has featured for the first team, slick midfield technician Billy Gilmour, pacy and clinical Dutch forward Daishawn Redan and tenacious defensive midfielder Ethan Ampadu. Whilst it is unlikely that all four of those players will be involved on Friday night, I wouldn’t be at all surprised to see a strong Chelsea side. This will be a very tough game for Burnett’s side but the return of Cyprus under 21 international Jack Roles and England under 18 international Paris Maghoma are massive pluses. It will be interesting to see how Burnett’s side will lineup against the ‘ Blues ’ and how they will approach Friday evenings game. Still without the injured trio of Jonathan Dinzeyi, Luke Amos and Shayon Harrison for Fridays game, I’m hoping that both Anthony Georgiou and Shilow Tracey will return to action after long spells on the sidelines. Despite going through some changes at the very top of Chelsea’s academy setup during the summer, the ‘ Blues ’ remain one of the best development sides in the country. And this Fridays London derby in Aldershot will be a cracking and competitive game between two sides who will be desperate to beat one another. I will be reporting on Friday nights game from the EBB stadium, then the following morning I will be at Hotspur Way to cover the big under 18 north London derby, before heading off to Wembley to watch our first team take on Chelsea.  I wish Wayne Burnett’s lads all the very best of luck for Friday evenings London derby and if this game is anything like Chelsea’s last (a 5-4 win over Arsenal) then we are in for a cracking game.

My one to watch: Already at the heart of the Scotland under 21 national teams midfield at the age of just 17, midfield maestro Billy Gilmour has been in excellent form for Chelsea’s development side this season. The former Rangers schoolboy has scored four goals from ten appearances in the PL2 this campaign. Gilmour is a slick midfield technician who has the ability to dictate the tempo of the game in a very Modric-esque like way. Gilmour is a player who the Spurs lads will need to pay close attention to during Friday’s game.