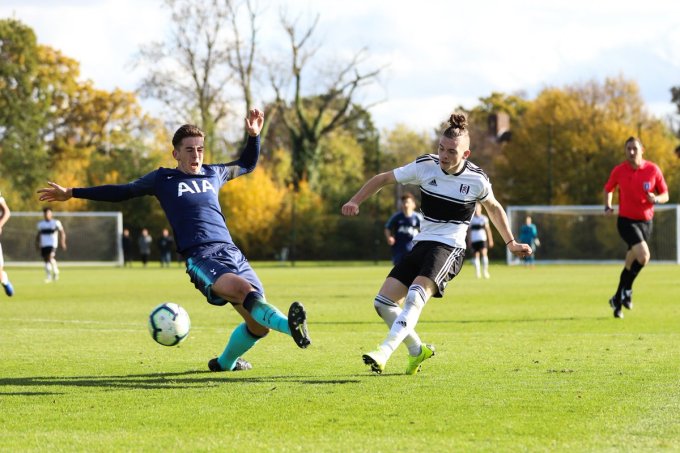 Our under 18’s will face Swansea City tomorrow at Hotspur Way in their second premier league cup game of this season. Matt Wells side sit second in their group after winning their opening game against Wolves in September, and a win over the ‘Swans’ on Saturday morning would leave them in with a great chance of topping the group and progressing to the knockout stages of the competition. Middlesbrough lead the group on goal difference after beating Swansea 6-1 in the opening round of matches. Matt Wells high flying side recorded a hard fought 1-1 draw with Fulham in a league game last Saturday, and that was the closest that his unbeaten side had come to being defeated in a game this season. Due to the fact that England’s under 17 team are competing in a tournament in Ireland at the moment, Spurs will be without important defenders Dennis Cirkin and Malachi Walcott for tomorrow’s cup game. However, this will give vital game time to some of our other defenders who haven’t played much for Matt Wells side so far this season. Tomorrow’s premier league cup game was originally scheduled to kick off at 1pm however, the game will now kick off at 11am. I am told that this is down to the fact that Swansea will now be staying overnight in a hotel before the game rather than travelling down to London on the day. Spurs will be feeling confident going into this cup game due to the fact that Swansea who are co managed by Anthony Wright and Jon Gray are in such poor league form this season. The South Wales club who we defeated 5-1 in the league back in August, have had a really difficult start to the new season. Swansea sit in 11th place in the southern division and the ‘Swans’ have only won one of their opening nine league games this campaign. The Swans have three players who have caught my eye over the last year or so whenever we have played them.

The first player is powerful right back Jayden Reid who had a stunning game against our under 23’s during the ‘Swans’ 4-1 win over us the previous week. However, due to the fact that he is already a regular for Swansea’s development side, I would highly doubt that he will the make the trip to north London for tomorrow’s game. The other two players are talented young English centre forward Shaquille Wynter-Coles (18) and the half brother of our former player Eidur Gudjohnsen, Arnor Borg. Arnor Borg Gudjohnsen operates primarily as a ten. There is likely to be quite a bit of rotation from Matt Wells tomorrow, this could see the likes of Maxwell Statham, Kacper Kurylowicz, Jubril Okedina and Elliot Thorpe get much needed starts for the under 18’s. Tomorrow’s game is a big one for our lads and they’ll be desperate to return to winning ways and there’s no better way to do that than in a cup competition. And talking of cup competitions the draw for the third round of this seasons FA youth cup was made earlier today. We have been draw away to category two Millwall with the game set to be played at the Den sometime before the 16th of December. I’m really looking forward to our premier league cup game against the ‘Swans’ tomorrow and my in-depth report of the game will be out on Sunday afternoon. I wish all of our lads the very best of luck for tomorrow’s game.

My one to watch: Swansea’s 18 year old centre forward and joint top scorer for their under 18’s this season with two goals, Shaquille Wynter-Coles.