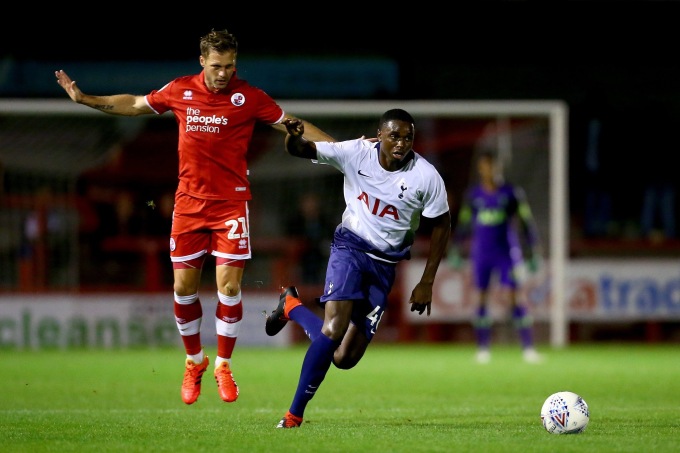 Originally scheduled to take place at Gillingham’s Priestfield stadium, tomorrow nights Checkatrade trophy tie will be taking place at the home of Gillingham’s arch rivals Charlton Athletic. As Wayne Burnett’s development side take on the league once club in their second game of the group stages. In many ways it is a must win game for the young Spurs lads if they are to have any chance of qualifying from the group. After putting in an excellent performance with a very young side again Crawley Town in their opening game, Burnett’s side managed to grind out a 1-1 draw against the league two side. Despite this they ended up missing out on the extra bonus point on offer after they lost the resulting penalty shootout. With it being the international break, Burnett will be missing the likes of TJ Eyoma and Troy Parrott. However, what is more concerning is the fact that we are missing so many of our players to injury. Luke Amos picked up a horrible season ending injury against Blackburn in our last PL2 game. Whilst our top scorer this season Shayon Harrison also picked up an injury in that game, and the 21 year old had since undergone an operation. We will also have to do without the likes of Anthony Georgiou and Shilow Tracey. Though with this brings an invaluable experience for some of the members of high our flying under squad to step up, and they certainly didn’t let us down when called upon against Crawley Town. Burnett’s side have had a bit of an up and down start to the league season but their last game against Blackburn Rovers showed plenty of positives after we overcame them 3-1 up in Lancashire. Tomorrow’s game will provide our lads with another excellent opportunity to take on EFL opposition in front of a big crowd, and on this occasion it will be at a renowned stadium, in the Valley. When you think about the experience and the quality that Gillingham have in their side albeit a much weakened side for tomorrow nights game. You’re talking about the likes of DRC international Gabriel Zakuani, former Spurs midfielder Dean Parrett and consistent forward Tom Eaves.

Some fairly encouraging news for Spurs is that Steve Lovell’s Gillingham have endured a difficult start to the league one season. The Gills occupy 19th place in the league and the club from Kent have only picked up three wins in the league this season. Despite suffering a 4-0 defeat to Portsmouth in their opening group game of this competition, ironically Gillingham beat Pompey 2-0 at the weekend (in the league) something which will give them confidence going into this cup game. Steve Lovell’s side must beat us in 90 minutes to stand any chance of progressing to the knockout stages. One player who I could see causing us a few problems down the right hand side is former West Brom wing back Bradley Garmston. I would assume that Hinds will be tasked with dealing with the former Ireland under 21 international. It should be a really competitive game in south London tomorrow night and one that will provide Burnett’s youngsters with such a great experience of coming up against a men’s team. It will be a special night in particular for our young centre back Luis Binks (17) if he is involved. Binks is from Gillingham and he has supported the Gills all his life. I wish all of our lads the very best of luck for tomorrow’s game. And I shall be reporting from the Valley and will have my match report out by Wednesday evening.

My one to watch: Gills winger Josh Parker is a player who really impressed me when I went to watch Gillingham play Charlton last season, to watch our loanee Connor Ogilvie in action. The Antigua and Barbuda international was a constant goal threat for the Kent club throughout that game. Playing as an out and out striker against Charlton on that day, Parker usually plays out on the wing. The former Red Star Belgrade forward has two goals from nine appearances in league one this season. For those wondering about Connor Ogilvie who is on loan at Gillingham from Spurs, he is currently injured, although I’m sure he wouldn’t be eligible to play against us if he was fit.