The continued rise of Oliver Skipp: 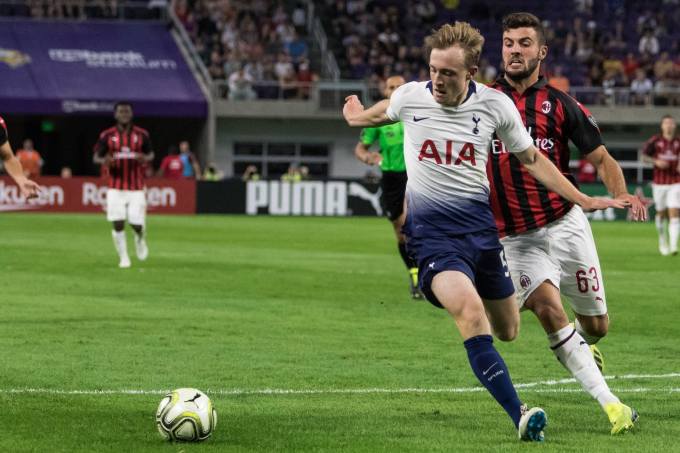 I’ve been meaning to write a piece on Spurs academy hopeful Oliver Skipp throughout the close season. In fact I did start a long in-depth article on the midfielder whilst on holiday in Ireland back in June, but anyhow here it is now and hopefully it does the immensely talented youngster justice. After the teenagers recent exploits away with the first team on our pre-season tour of the United States I think it’s quite an appropriate time to write a piece on Skipp, and one inwhich reflects on his extraordinary contribution to the development side last season whilst still a first year scholar. The Hertfordshire born midfielder played an incredible 61 games for Spurs’ various youth teams last season whilst in his first year of scholarship at the club. Young Oliver has always been ahead of his years at least since I first became aware of him. As an under 15 he was already a full England under 16 international and an integral part of of Tottenham’s under 16 side. The following season (2016/17) the lifelong Spurs supporter was quickly integrated into John McDermott’s under 18 side despite only being a schoolboy. It didn’t take Skippy (as he is known by teammates) long before he made his mark on that talented side. He became an important part of the side which made the 2017 FA youth cup semifinals that same season, he also made a string of appearances for the under 19 side in Europe. On top of that he featured prominently for McDermott’s side in the under 18 league after adapting so seamlessly to under 18 football, he also regularly played at centre half. The tenacious midfielder would reach a feat few youth players had achieved for Spurs. When in February of 2017 he was given his debut for the development side by the late Ugo Ehiogu in a PL2 game against Sunderland. Oliver was still a schoolboy. A domineering defensive midfielder Skipp shows all the qualities of an old school ball winning anchor man, combined with the qualities of so many of the top central midfielders of the modern day.

Combining brains with brawn Skipp is incomparable with any of the midfielders of his age group in England. He draws likeness with a wide ranging set of players, from our very own legendary midfielder Steve Perryman to the likes of Frank Lampard, Toni Kroos and a certain Michael Carrick. He is the complete defensive midfielder, he has that ability to control games from the centre of the park. He is both domineering and decisive, he recycles possession effectively and is able to read the game to perfection. He presses relentlessly and keeps good positioning, often covering for defenders who are higher up the pitch and out of position. He carries the ball well and is able to glide past players twice his size in the centre of midfield, showing great guile as he does so. However, the lad from Hertford is much more than a combative defensive midfielder and fine centre half. He is also an extremely creative player who uses the ball resourcefully to initiate attacking moves from deep. His range of passing is impressive as is his skilfulness, something which isn’t mentioned a lot about his game. The teenager is also a good dribbler and he often poses a threat going forward, with his trademark lung bursting forwards runs from deep inside in his own half. A little over a year ago I watched in amazement as Oliver started our under 23’s first league game of the season against Sunderland, up in County Durham. Skipp singlehandedly embarrassed Sunderland’s Jack Rodwell in the middle of the park that day, he controlled the midfield from start to finish, even going onto assist Kazaiah Sterling’s goal. It was at that precise moment that I realised how incredibly special a talent the teenager was.

After our encounter with the black cats development side Skippy never seemed to look back, he would go onto cement his place in Burnett’s under 23 side. Keeping out his older and more experienced teammates such as Jack Roles and Dylan Duncan in the process. His ability to dictate games is one of his greatest qualities, his composure under pressure and ability to create little pockets of space for himself is so effective, and useful for his teammates as it helps to alleviate the pressure off of others. That remarkable maturity makes him a natural born leader. He constantly plays with his arm flailing and can often be seen giving out advice to other members of the team throughout games. Having watched Skipp play extensively over the past couple of seasons I’ve grown to admire his style of play. There’s no big I am about the teenager from Hertford. No pretentious skills or over the top showboating in the centre of the park (not that there’s anything wrong with that!) like Winks he doesn’t take unnecessary chances during games. He keeps things ticking like the 22 year old midfielder, but unlike Winks he is far more effective at breaking up play and recycling possession, it seems to come more naturally to him. Throughout my many reports from last season you’ll spot a consistent theme whenever I reviewed Skipp’s performances, not once did he have a bad game. He was consistent throughout the campaign and whilst he did tire towards the end of the season due to the ridiculous amount of games he had been involved in, he always managed to hold his own and find a way to impact games. Whether that be throwing himself right in front of an attempt on goal or making defence splitting passes through the middle. He always managed to find a way to effect the game in a positive way. It didn’t surprise me in the slightest to see him impress fans with his performances for the first team this summer. His most impressive showing came during our showdown with AC Milan in Minneapolis.

During that game Skipp managed to hold his own in the middle of the park whilst competing with house hold names such as Franck Kessié and Manuel Locattelli. He fitted in so seamlessly to Pochettino’s young side, he was assertive and energetic all over the pitch. With his typically aggressive pressing and hounding down of the opposition players, Skipp also managed to make some important interceptions and recoveries. His pass completion rate was impressive as was the way in which he carried the ball in the centre of the pitch. He even drew praise from Tottenham star Christian Eriksen who was impressed by Skipp’s courage and all round ability. During my end of season round up of our development side last season, I lauded Skipp as the best English midfielder of his age group in the country, and I strongly stand by that statement. I’m not expecting him to get much game time for Pochettino’s side this season other then in the odd cup game. However, I’m expecting him to go down the same path of development as Walker-Peters and Winks have done in recent seasons. That consistent involvement with the first team in training combined with regular involvement in the PL2 with the development side, and the UEFA youth league with the under 19’s. Young Oliver is an exceptional talent and I know for a fact that all of the premier leagues top clubs have been tracking him for a long, long time. But like Winks and Onomah and Kane he is a Tottenham fan just like you and me, and sometimes that is all that matters. The masterful midfielder has already proved to Pochettino that he is able to step up and perform on the big stage. The next step for young Oliver and the Tottenham coaching staff is about nurturing that talent and ever so slowly easing him into the first team fold. And I have no doubts whatsoever that he’ll go onto make his mark on the first team in the future, after all he is still only 17!