Some notes on Troy Parrott’s performance against the Netherlands under 17’s: 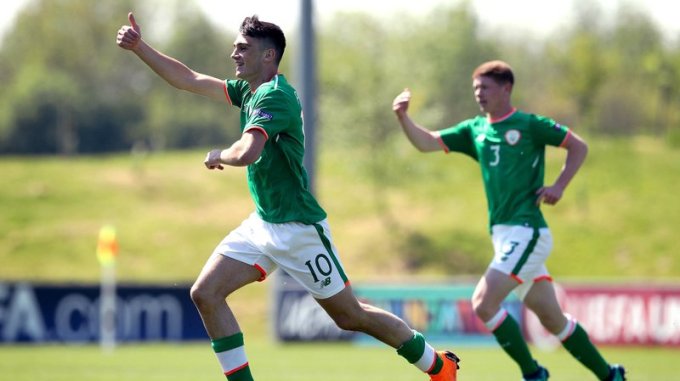 It was an under 17 Euro quarterfinal unlike any other for Troy Parrott’s Ireland, who went out of the European championships in the most controversial of fashions in Chesterfield, on Monday evening. I was in Chesterfield solely to report on the performance of our young striking starlet but before I get going, I must explain what happened or what didn’t happen during the match. Ireland took on an extremely highly rated Netherlands side in the quarter finals of the European championships, in the warm evening sun at Chesterfields Proact stadium. The Dutch, who had won all three of their previous group games without conceding a goal, were heavy favourites for the tie. The first half was controlled from start to finish by Holland who kept onto the ball for fun, they knocked it about with ease and panache. And whilst Ireland stood resolute in defence they stood no chance of getting the ball off of them, it was to their credit that the Dutch had been unable to really test the Ireland goalkeeper Jimmy Corcoran, such was the resolute defending from the Irish. In the second half the Irish opened up a bit more, but Parrott was still getting virtually no service from the wide men. It was only when the Dutch took the lead from a corner kick on 62 minutes, that the Ireland team were really sparked into like. Young Troy initiated a move only a couple of minutes later before clinically finishing it off on the edge of the area, to draw Ireland level. There was little between the two sides during the remaining 16 minutes, meaning that the tie would be decided by a penalty shootout. Despite Adam Idah having the first penalty of the shootout saved, both teams converted their remaining penalty kicks.

This ultimately meant that with the scores tied at 4-4, the Netherlands had the chance to win the shootout through Chelsea’s Daishawn Redan. This is how the controversy came about, Redan’s powerfully struck effort was excellent saved by the diving Corcoran. Irish players and myself were celebrating wildly, but only a couple of moments later that joy was turned to despair. The referee pulled out Corcoran’s second yellow card of the game and sent him off. In the most absurd set of circumstances the referee had deemed Corcoran to have come off his line as Redan took the penalty. Yet if you watch Ireland’s first penalty, you’ll see that the Dutch goalkeeper commits exactly the same ‘offence’. An outfield player (Oisin Mcentee) was forced to go in goal for the retake, but unsurprisingly Redan buried his effort this time round. The decision from the referee was utterly perplexing and infuriating from an Irish perspective, many of the Ireland players were in tears after the game, slumped to the floor and in total disbelief. Getting back to Troy Parrott’s performance, it was another excellent shift from the Tottenham youngster. Who made the most of his time as an attacking midfielder who was reliant on limited service. There was little to report of Parrott’s performance in the first half, he had been starved of service as the Dutch dominated possession. In fact Ireland had not even managed to have an attempt on goal. As Ireland opened up in the second half, so did Parrott. He embarked on a promising run through the middle shortly after the restart, before being involved in a meaty challenge which resulted in a minor scuffle between both sets of players. Parrott picked up a yellow card in the process.

After the Dutch had taken the lead through Van Gelderen in the 62nd minute, Colin O’Brien’s side were forced into changing their game plan. It took only a couple of minutes for the Irish to respond, due mainly to the intricacy of Parrott. After being picked out on the edge of the Dutch penalty area by Ledwidge’s cross, Parrott delicately poked the ball through to Barry Coffey inside the box. The young Celtic midfielder swivelled round before laying the ball back off to Parrott on the edge of the penalty area, the striker made no mistake as he clinically side footed the ball into the bottom right hand corner of the goal, it was a brilliant finish from the Dubliner! There were to be no more meaningful chances for either side, and the game would eventually be decided by a penalty shootout. Parrott took Ireland’s second penalty of the shootout, he calmly slotted it into the far corner of the goal. It was another really impressive performance from the young centre forward. Despite not being played in his favoured position throughout the tournament, Parrott managed to score three goals in the four games that he played in. He has an attacking nous about his game which few schoolboys can rival. He shows great awareness to his surroundings, and one thing which is striking is his excellent ball control and movement. His fine scoring record for Ireland gives an indication as to what a clinical finisher he is. I’m already excited to see how he performs for the under 18’s next season, when he has players with the quality of J’neil Bennett and Rodel Richards out wide. Phoenix Patterson in behind him setting up chances, and the Winksesque Jamie Bowden sending precise passes over the defence for Parrott to chase onto.

I’m going to make a bold prediction about the Irishman, similar to one which I made about Oliver Skipp at the end of the 16/17 campaign. I think Parrott will excel at under 18 level during the first few months of the season, so much so that I think he’ll be a fully integrated member of the development side by January. I’ll end this piece by sharing an amusing story of Troy’s time spent on trial with Celtic, one which shows just how ridiculously talented the kid is. I was told up in Chesterfield, that Troy was on trial with Celtic a couple of seasons back. During the trial if you can call it that, Parrott scored five goals in the first half of a game. At halftime a coach (who I won’t name) decided to even things out a bit by putting Parrott in the other team, but young Troy only went and scored four more goals!