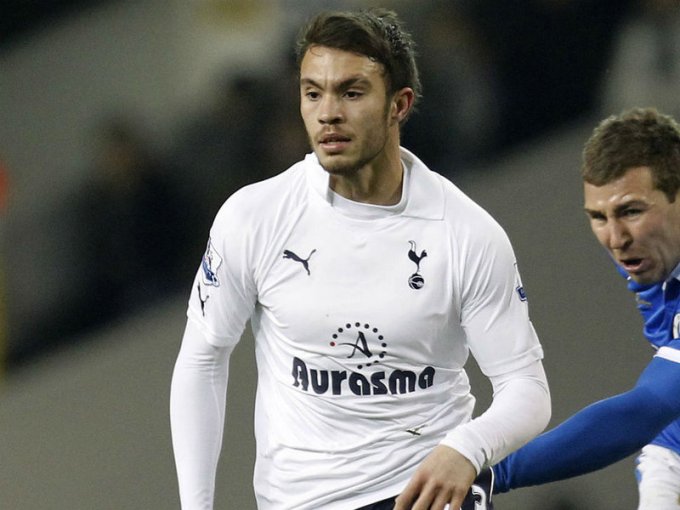 Cameron Lancaster now of Louisville city in the USA, is a product of the Tottenham Hotspur academy. The 25 year old striker came through the ranks at Spurs before making a solemn first team appearance in the 2011/12 season. The promising centre forward was blighted by injuries during his time with the lilywhites and was released by the club in 2014 having stints at both Stevenage and St Albans before making the move across the pond to the USA. Now 25, Cameron is enjoying life in Kentucky and only last season he helped Louisville to the USL title. I caught up with Cameron to discuss his memories from his time at Spurs.

Cameron: Earliest memories are joining spurs after a 2 week trial from my Sunday league team. My dad and Sunday league manager had previously sent a letter in to a few clubs asking for a trial but Spurs were the only ones to reply and take me in!

Cameron: Looking back, apart from the injuries it was great. I had really good coaches such as Les Ferdinand, Chris Ramsay and Tim Sherwood and got to play along side really great players. You see a lot of ex players from Spurs just want to see the team do well and I’m the same, that comes from how the club treats you so I have nothing but thanks to give.

Cameron: Brazilian Ronaldo for sure. His physicality mixed with his technique and skill was how I wanted to play, every opportunity I had I would try and watch him on the tv.

Cameron: John McDermott was always a big influence, he just wants the best for everyone and he really helped me at times. Also Chris Ramsay, Tim and Les as I got older really pushed me forward to the first team, I have to thank them a lot for me making my debut.

Cameron: When Eidur Gudjohnsen came in I would watch him a lot. I saw his composure and movement on and off the ball and tried to involve that in my game. Also Defoe’s finishing was always good to watch and learn from.

Cameron: Toughest part was probably the competition. We had a lot of players from abroad coming in, there wasn’t an average player out of the 20 or so of us.

Cameron: Greatest memory was definitely making my debut. We were 3-0 up and Redknapp called me over from the bench and told me I was going on and to enjoy it. I played for 20 mins and did pretty well, nearly got a goal too and then the next week I was on the bench at Liverpool too. As a kid you dream about playing in the prem so to even get 20 mins out there, I’m thankful.

Cameron: After my debut I got injured pretty badly and was out for a year and after coming back from that I had 6 months playing and did my ACL. My contract was coming to an end so we mutually agreed to call it a day. I went to stevenage for about 2 months and then had an opertunity to get to America so I took it. Unfortunately I did my other ACL 2 weeks after signing for Louisville City but I’m all good now and we won the league last season.

Who is the greatest player that you have pleasure of sharing a pitch with?

Cameron: Has to be either Modric or Bale, they were both playing when I made my debut and they were both world class however if Harry keeps this up it would have to be him!

Harry Kane. He was a man who you would have known well whilst playing in the academy. What was he like as a player coming up the youth ranks?

Cameron: First off he always scored, whatever age he’s been he has always scored goals. He’s never been the quickest or even the strongest but he’s always been very driven and he’s worked on his game a lot and that’s why he’s where he is now.

Who is the toughest defender that you have come up against thus far?

Cameron: That would be Woodgate. I remember training against him and he would block off my runs and somehow whenever I would shield the ball he would always get a toe on the ball and knock it away. Wasn’t the quickest or strongest but very smart.

Cameron: Play games wherever you can would be my advice. There’s never a guarantee that you’ll play for the first team so the more you get yourself out in the league and get seen, the better it will be for your career. Also, you have to be 100% focused and driven and make football your life, the more effort you put into the game the more you’ll get out of the game.