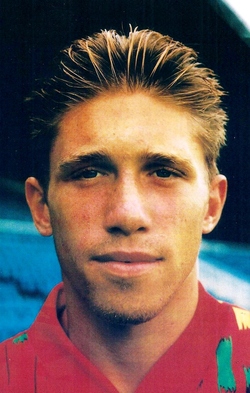 Neil Ernest Le Bihan came through the Spurs academy in the 1990’s after joining the lilywhites youth set up from fellow London rivals Wimbledon. The talented midfielder was in the same age group as the likes of Quinton Fortune and Stephen Carr. After captaining the Spurs youth team on various occasions, Le Bihan went on to enjoy a successful career in the game, at the likes of Peterbrough united and Dover Athletic before retiring from the game at the age of just 29 due to injury.

Neil: I went to school and was spotted whilst playing for Wimbledon by Spurs scout Ted Powell. Now departed sadly. I was extremely glad for his input in my early career. As I remember he was part of the management team with Sol and Robbie Fowler who won the Under 18’s with Darren Caskey as Captain. I left school and 16 and lived in digs for my time with them in Bush Hill Park with a family there. My first memory was being a bit overwhelmed by it all. Being so close to working with class players, and occasionally getting to train with them was a far cry from a few months earlier studying hard for my GCSE’s.

Neil: My experience at Spurs made my career. They taught me how to play football properly. It served me well throughout my career afterwards, and always gave me a level of respect from the outset with most new team mates when I arrived at a new club. I will be forever grateful to Spurs, and the memories. I still talk now about some of the players I used to train with for a couple of years when I left school.

Neil: I was brought up a Chelsea fan (although cannot even bear to talk about them now, so I no longer have a team to follow). …But back then my idols were Kerry Dixon, closely followed by Pat Nevin. Outside of Chelsea I used to look forward to watching Glenn Hoddle. I got to play against him in a friendly with Spurs once which made a dream come true for me.

Neil: Pat Holland I remember a lot and was always really helpful with me. When we used to train in doors at White Hart Lane he used to really get on at me about my accuracy volleying into blue circles on the wall. I scored a couple of volleys later in my career and always used to put them down to Pat’s help. He had respect immediately too because of his playing career. Keith Walden made me captain in my second year and we got along well, I was grateful for his trust in me with the captaincy. It made my Mum and Dad proud. As players I liked watching Nick Barmby as I’d shared a training pitch with him a little bit, and to see him up close, his desire to win always struck me. Sol was absolutely amazing and I still say to people that he was the best player I ever played with. He was inspiring to me.

Neil: I was playing in Division 1 for Peterborough soon after when the likes of Keane, Vierra, Gerrard and Keane used to mix it up, so they were utterly amazing to watch, and I certainly used to wish I had their attributes at times.

Neil: I don’t really remember it being tough really. My friends were studying back at school or something else, so I felt like I was living the dream.

Were there any youth players at Spurs who you were particularly close to. And are you still in touch with any of your former team mates?

Neil: I went into digs with Gareth Knott, Glynn Hurst, and Simon Brown the goalkeeper a year younger. We had Stephen Carr and Garry Brady around the corner, and Quinton Fortune, who we used to hang out with fairly regularly. Garry and I used to play Chess together, he was a tough Glaswegian as I remember. We were probably closer as a group just because we lived together, but our group was tight. Stephen Carr (Freddy then) I used to remember as a very strong lad, with an ability to ping a football accurately like I had not seen before. The group one year above us as part of the same apprenticeship group had Sol, Caskey, Barmby, Chris Day, Danny Hill and others in a very strong set. Facebook means that we know largely where each other has ended up, or could find if we wanted. Knotty and Hursty always send a happy birthday message still. I’ve not seen them for over 10 years now probably.

Neil: Playing with Paul Gascogne a few times when training, I was always awe struck. He was crazy good too, as well as totally mad. I’d seen him on the telly and always loved him so to actually even have a few times playing on the same training pitch and exchanging passes was amazing. I remember once being asked with a couple of other larger youth team players on a Friday once to help Ray Clemence prepare Ian Walker for the next days game against Wimbledon. They had Fashanu and the crazy gang mentality still. He was throwing balls in the air and telling Ian to catch them…..and we’d have to run and jump into him heavily with elbows imitating what was coming the next day. I remember Ray Clemence just kept shouting…’hit him’….he’s got this all game tomorrow…’hit him’. Captaining the Youth Team remains always special.

Neil: I got taken on by Peterborough on a 1 year initially contract by John Still, their new manager. After pre-season he said I need toughening up for men’s football, and I went on loan to Yeovil and Bishop’s Stortford, for 3 month stints, before coming back that season, being given a run out, making my debut, playing a few games after, doing well, and consequently being offered a new 2 year contract. From then on in, I was in the squad either starting or coming on lots. I scored a few key goals in cup game there, and we had a couple of nice cup runs which I was part of. At the end of my final season there with Barry Fry we were relegated from Division 2 (division 1 now), I had not played a great deal, and was given a free transfer. I had started studying at this time, and was offered deals by a couple of teams nearer Peterborough, but Dover in the conference contacted and offered me a 2 year deal with them, only training twice a week but in a league then where half the teams were full time, so the standard had felt high when I thought of times at Yeovil out on loan. I managed to get a place at Kent University to study for my degree, so moved to Canterbury. 5 years with Dover Athletic in the Conference I think in the end were my most enjoyable years when I look back. I was a regular starter, we nearly made it up one year, and had a great run in the trophy too. I ended up with Crawley town for a year after that, and then packed football in shortly after, after turning out for a few games with my then local team Carshalton Athletic. I had a deteriorating back injury at the time which was increasingly impeding my fitness. I’d started work in the non football world too by then, so the decision to quit was made a little easier, but I stopped playing at 29 in the end, and have not really kicked a ball since.

Neil: Coming off the bench and scoring the winner against Wrexham in the FA Cup at London Road for Posh in the 3rd round. Back then the FA Cup still had meaning, and especially the 3rd Round. That first Saturday in January had been in the calendar since I was a child. My Dad used to come in those days and he’d had £5 on me to score first at 16/1.

Neil: It has to be hard work really, and focus. And show respect, but don’t be scared.

Neil: ….I don’t have much choice really seeing as one of my best pals is a hard core Spurs fan, so I’m always updated regularly. I lived in Norwich a few years back, not far from Carrow Road, so went to watch Spurs then. Kane and Alli were amazing that night.