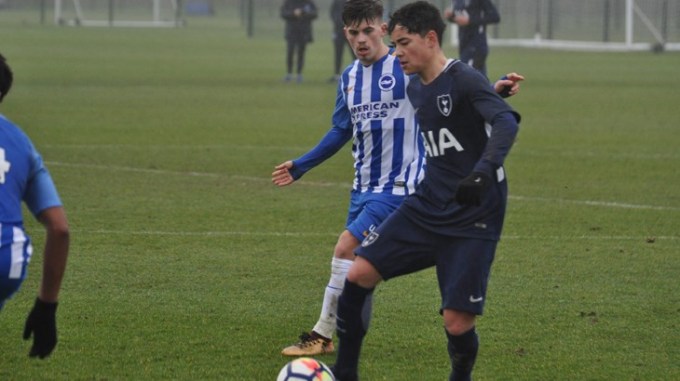 I was treated to a thrilling game down at the south coast on Saturday morning, as Scott Parker’s under 18 side overcame Brighton 6-3 to record a valuable league win. It was a wonderful game to watch with free flowing attacking so eminent throughout, but it was Parker’s side who were the better and far more creative team and in many ways it was a 6-1 kind of game as oppose to the actual result. A much rotated side from the one that had beaten Bournemouth in the youth cup in midweek, Parker’s team included a mixture of regulars and fringe players in need of game time. A host of players were missing due to participation in the ALKAAS international cup in Qatar, the game also saw young u15 goalkeeper Lo-Tutala named on the bench (a new name to me!) Spurs got the game underway as frontman Reo Griffiths bellowed to his team mates that ‘we need to get these 3 points!’ The rotated Spurs side started the game well, moving the ball around with a zip and attacking intent as the rain came lashing down. Wide man Rodel Richards wasted an early chance when he missed an opportunity to put Mukendi through on goal down the right hand side. A lovely lofted ball from Dinzeyi soon afterwards almost picked out Armando Shashoua in the area after the latter made a good run, as Spurs began to dominate possession. Another good move came about after Richards pulled off a sublime turn on his man before finding Hinds on the edge of the area, the holding midfielders effort landed straight in the palms of seagulls goalkeeper Tom McGill. Spurs’ excellent opening play gifted them the lead on 18 minutes courtesy of an emphatic finish from Rodel Richards. It was a fine attacking move which started with Hinds who passed to Patterson, the lively forward picked out Richards on the left side of the penalty area, the Spurs forward showed good feet before curling a lovely effort into the bottom right side of McGill’s goal, 1-0.

Spurs had barely finished celebrating when the seagulls unexpectedly levelled four minutes later. Brighton had caught us by surprise, Brighton’s Ryan Longman cut inside from the left before curling a wonderful effort inside the postage stamp of Austin’s goal as Spurs were left to ponder. Spurs soon begun to maintain the ball playing some nice stuff, though they were not utilising the electric Jeremie Mukendi who found himself free and unmarked down the right, continuously. Spurs were given an opportunity to test McGill when the lively Shashoua won a free kick in a dangerous position around 25 yards out from goal. Winger Phoenix Patterson stood up confidently to bend a beautiful effort into the top right hand corner of the goal, which despite a good hand from McGill was never going to be stopped, 2-1. It was definitely a goal of the season contender. McDermott roared to his players the need to show urgency after regaining the lead, and they showed that in their play. That’s why it came as another big surprise when the seagulls drew level for the second time in he game, on 39 minutes. It was quite a silly goal to concede, Hayden Roberts cross from out wide wasn’t dealt with by Jonathan Dinzeyi who failed to pick up the danger man Stefan Ljubicic in the area, the Brighton man powering his header past Austin to make it 2-2. But once again Parker’s lads picked themselves up and went on the offensive, Maxwell Statham’s brilliant low cross from the right was only missed by a couple of inches by Richards who went sliding in towards the near post. Spurs almost scored straight from kick off at the beginning of the second half when Shashoua’s inviting cross into the area was headed straight at McGill by Dinzeyi.

Brandon Austin spread himself well to close down Brighton’s Ryan Longman shortly afterwards. Whilst the seagulls looked sharper in this half, it was Spurs who got the decisive third goal. When the inform Reo Griffiths made it 3-2 five minutes into the half, after Spurs caught the seagulls on the break. Phoenix Patterson threaded a lovely through ball to Griffiths up top, he raced away from his man before cooly slotting the ball into the left side of the goal. This incredibly open and exciting game of football was one of those that you wouldn’t want to predict. Jonathan Dinzeyi made a crucial intervention in the following minutes, when he managed to flick wide Hamish Morrison’s dangerous cross. The energy of Parker’s team proved too much for the home side. The potent Reo Griffiths made it 4-2 to Spurs in the 59th minute after pouncing on a loose ball after some sloppy defending from Brighton. Before advancing forwards and curling the ball onto the inside of the right hand post, to see it roll past McGill’s line, 4-2. Spurs still had to be alert at the other end, Statham doing brilliantly well to block Danny Cashman’s acrobatic volley. Cochrane fired well over moments later, as Parker’s side dictated play. Reo Griffiths came so close to netting his hat-trick, after going on a surging run across the edge of the penalty area before firing an effort at McGill, which was well stopped by the Brighton goalkeeper. But he couldn’t hold onto the ball and Patterson was there to bundle the ball home courtesy of a deflection of a Brighton defender, 5-2. However, a good move from the seagulls minutes later resulted in them pulling a goal back. After Tareq Shihab’s well measured pass picked up Longman in between two Spurs defenders, the Brighton striker managing to tuck the ball past Austin to make it 5-3.

Patterson forced a save out of McGill soon afterwards as the rain continued to fall. Brighton were still holding out for an unlikely draw, first through Cashman who curled an effort inches wide of goal. And then through Ljubicic who fired agonisingly wide after meeting Longman’s cross. Yet another golden chance came the seagulls way when Ljubicic somehow managed to be head the ball over the open goal, after receiving a pacy cross at the far post. Thankfully for Spurs the game was done and dusted when the fantastic Patterson got his first hat-trick at this level to put us 6-3 ahead. It was another well worked move from Spurs, Griffiths picking up Shashoua’s crisp pass before racing forwards. The strikers thumping effort was parried by the Brighton goalkeeper straight into the path of Patterson who tapped home. Spurs were still hungry to extend their lead even in the dying moments of the game, Reynolds saw his effort cleared on the line. Whilst at the other end, Morrison fired straight at Austin from an acute angle. Spurs’ magician Phoenix Patterson almost got his fourth of the game late on when he dragged an effort across the face of the goal. The final score from a thrilling game Spurs 6-3 Brighton, Parker’s sides good run of form continues. They host Southampton next on the third of February. COYS

Player reviews: -Brandon Austin: Made some important stops, particularly in the second half.
– Maxwell Statham: Very impressive display. Defended well, kept good positioning and made some crunching challenges and important blocks. Starting to remind me a bit of a Dunk/Duffy type of player.
– Jamie Reynolds: Another impressive showing from the left back, solid defensively and potent going forward with his lung bursting runs down the left.
– Tariq Hinds: The versatile Hinds played in the holding midfield role for this game, and he was immense. Very tidy and efficient, held his own very well. Also very skilful in tight situations, very calm and composed!
– Jonathan Dinzeyi: Apart from an unfortunate misjudgement from Dinzeyi for Brighton’s second of the game, I felt he put in a good shift at centre half, made some crucial interventions.
– Brooklyn Lyons-Foster: Another top notch performance, calming and influential from the back. Lyons-Foster thwarted the Brighton front line on numerous occasions. Good defending.
– Jeremie Mukendi: Really impressed me out right when he got on the ball, he was electric going forward. Sadly despite constantly finding himself free down the right in good pockets of space, Spurs failed to utilise him.
– Armando Shashoua: Excellent as always, a driving force going forward. Shashoua showed tremendous strength (like his brother) both on and off the ball. He initiated many attacks, and went on many good runs in between the Brighton defence. The number 8 was also tidy and crisp in his passing. Some of the Brighton parents near me were very impressed with him, even wondering if he was Pochettino’s son.
– Reo Griffiths: Continued his excellent form, scored two well taken goals and provide two assists. The stats don’t lie, he is a top prospect.
– Phoenix Patterson: My motm see below.
– Rodel Richards: Another who had an excellent game, the trickery of Richards out left caused many problems for the Brighton defence. One of the most skilful players I’ve seen at this level. Richards showed fantastic stamina, tracking back and getting stuck in throughout. He also scored a lovely goal which takes his tally to 10 this campaign.

My man of the match: Phoenix Patterson. The creative force behind an excellent attacking display. The intelligent wide man had a superb game, scoring his first hat-trick at this level. Showed great movement on the ball, showed great feet and managed to get in many goalscoring positions. The highly talented winger has been involved in 17 of our under 18’s goals this season.