Spurs 2-0 Swansea: (my take on a good night in South Wales) 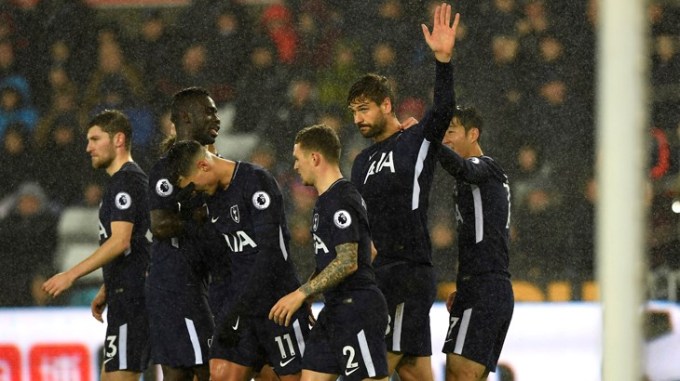 The weather was abysmal as the rain came gushing down on to the muddy turf of Swansea’s liberty stadium. Fortunately for Pochettino’s side, they managed to overcome the adverse weather conditions to record a comprehensive 2-0 victory over the relegation stricken swans. As expected it was a game in which Pochettino’s energetic Spurs side dominated throughout, playing a slick passing game on the wet and slow pitch, Spurs pressed Swansea aggressively in the opening minutes. With star man Harry Kane dropped to the bench for this one, Fernando Llorente made the step up as he returned to the club he left to join us in in the summer. That gamble was to pay off, as after a positive start Spurs were awarded a free kick in a dangerous area. Christian Eriksen’s whipped ball was met by Llorente who glanced the ball beyond Fabianksi to give Spurs the lead. Spurs continued to dominate the home team for the remainder of the half, coming close to doubling their lead on numerous occasions. It had been a fine performance. However, the second half was quite different, Spurs weren’t as aggressive or creative as they had been in the first. Whilst they were still controlling the game they lacked a bit of punch to find that all important second goal. Swansea grew into the game and for a spell Spurs were under the cosh, Van Den Hoorn’s deflected header hit the upright, whilst substitute Luciano Narsingh also threatened Lloris’ goal. But Spurs defended well and once Harry Kane was introduced towards the latter stages of the game, you always got the impression that a second Spurs goal was on its way. And that was to be the case courtesy of a magnificent assist from Mr.Kane.

It was a pass of real quality and precision, Kane who was down the left flank curled a sumptuous pass to Dele Alli, who controlled it first time. Rushing through on goal his initial effort was saved by Fabianksi, but Alli gobbled up the rebound with an emphatic finish. It was a deeply satisfying result and performance from Pochettino’s men, they had braved the pouring rain and tricky conditions. To outclass Carlos Carvalhal’s men over the course of 90 minutes. It was a good team performance but for me the game changer was a young man by the name of Dele Alli. Alli has been in excellent form of late and yesterday’s game was no exception, the midfielder was on top form. Everything from his diagonal runs to his creativity on the ball impressed me. And yet again he was there to make the run which would seal the game. The 21 year old has now been involved in 18 of Spurs’ goals this season! COYS