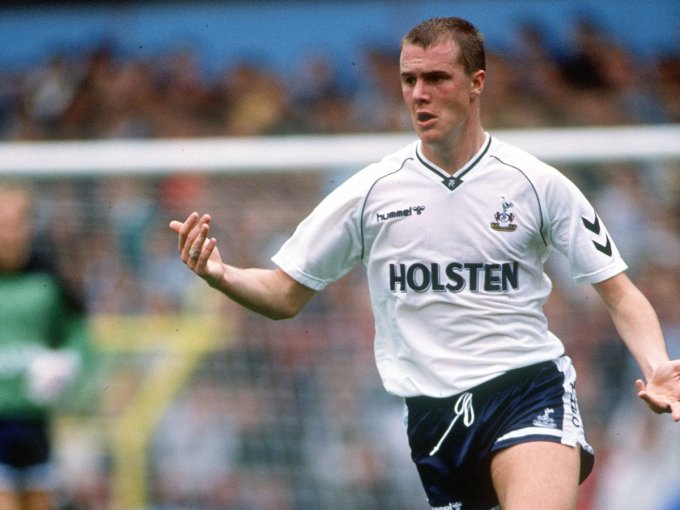 Guy Butters played over 35 times for Spurs during the late 1980’s to early 1990’s, a centre half by trade Butters was a product of Tottenham’s famous youth academy. And went on to enjoy a hugely successful career with the likes of Portsmouth and Brighton following his departure from the club in 1990. Guy kindly agreed to doing an interview with me about his time at the lilywhites, and his memories of his career are both fascinating and insightful.

What are your memories from your time at Spurs?

Guy: I’ve got great memories of my time there. Earliest memory was playing against Arsenal in a behind doors friendly as a 15 year old schoolboy. First game as a centre half (I signed Schoolboy forms as a centre mid) and I was up against Paul Mariner who was throwing a few elbows around. I managed to do ok against him and I think that cemented the position that I was to play for the rest of my career. I loved every minute of my time there and I’d be here all day if I were to write them all down.

Guy: I remember being drafted into the squad for the cup game v Blackburn on the Tuesday night before as there were a few injuries to the centre halves in the first team. Chris Fairclough had to come off late on so I got thrown on. A free kick ricocheted off my head into my own net but we managed to win the game. I made the bench for the next game as well.

Which players or staff members did you look up to at the club, as a young defender?

Guy: I used to love watching Mabbsy and Richard gough when I was an apprentice and was told by Keith Blunt (my youth team manager) to study those two when I watched the first team. Watch what they do when they are in and out of possession. The communication and positioning that goes on in the first team. When I was offered a pro contract, I also learnt a lot training alongside Terry Fenwick and Chris Fairclough.

Who did you make your Spurs debut against and could you describe your memories of that day?

Guy: It was against Wimbledon and I remember a couple of newspapers building me up as they thought I’d be starting the game, especially as it would have put me up against John Fashanu. I got to the ground that day and bumped into Bobby Gould (the Wimbledon manager) and he told me to “watch my teeth”!! I started the game on the bench, and came on just before halftime for Gary Stevens, following the infamous Vinny Jones tackle. I remember having a couple of tussles with Fash and held my own, seeing him subbed off in the second half. Midway through the game, I scored with a header from a corner and we went on to win 3-2. I got home after the game and my dad gave me £20 to go and have a celebratory pint with my mates. I woke up next day with the worst hangover ever, and £30 in my pocket!! Apparently I got carried home!

What was it like to be an integral part of a Spurs defence which included the legendary Gary Mabbutt?

Guy: I loved my time playing in the first team, learning my trade alongside players that had played in world cups. We picked up some good results and finished high up in the table that year. Unfortunately, the next season, I found myself in and out of the team for one reason or another and eventually went out on loan.

How did your time spent as a young up and coming Spurs player, benefit you later on in your career, when you played with the likes of Brighton and Portsmouth?

Guy: I took all the things I learnt as a youngster and tried to implement them at my other clubs throughout my career. I felt the benefit more when I neared the end of my career and relished the opportunity to nurture and assist a lot of young centre halves that I played with. One or two of them have gone on to excel in the premier league and I hope I have helped them along the way.

What for you was the pinnacle of your footballing career?

Guy: think appearing for England U21’s remains an achievement that I’m very proud of. I’ve helped a few clubs get promotion as well. I’m immensely proud of being named as ‘defender of the tournament’ for two years on the trot, whilst representing Spurs youth team at the prestigious Düsseldorf youth tournament in Germany ( we beat the Russian National Youth team in the final one year) and I’m also proud of winning the south east counties youth league 3 times and the reserves combination league twice. Good times

Guy: I was so lucky to have been a part of that spurs team of the late 80’s. You had the likes of Eric Thorstvedt in goal, Fen, Mabbsy and Chris Hughton alongside. Chris waddle, Paul Allen, Gazza, Vinny Samways in front, with the likes of Gary Lineker, Walshy, Paul Stewart etc up top! What a squad!! Out of all of them though, I’ve never seen a player like Gazza before or since. Absolute genius, absolute lunatic! Lol

Could you describe what it was like to represent your country at youth level?

Guy: Playing for the U21’s was a good experience. We had some very good players in the team I played in. Neil Ruddock, David Batty, Russell Beardsmore, David Hurst, Paul Ince, Marco Gabbiadini etc and they were all a year or two older than me. Unfortunately, there was a massive drinking culture with some of the group, which I got involved in, and it didn’t bode well with the management at the time. Hence only the 3 caps!

As a central defender, who was the toughest centre forward that you came up against?

Guy: I remember being thrown on as a sub in a testimonial game and played against Billy Whitehurst ( I don’t think anyone else fancied it!!) and the first thing he said was “we can have it two ways lad, either nice and easy or we’ll have it rough. Up to you”
“Er, nice and easy please!!”
Did ok against him as well. I don’t recall ever being scared of anyone though. Mark Hughes was strong but the ones that gave me most problems were the little nippy ones like Paul Dickov or Terry Gibson.

After a playing career which stretched over two decades at the likes of Brighton, Southend, Gillingham and Portsmouth. What does your first club Spurs still mean to you and do you still follow their progress?

Guy: I still look for Tottenham results and hope they do well. I’ve been back as a player (for Brighton when we lost 2-1 in the fa cup) and a couple of times to watch. I’ll always hold it dear to my heart as it’s my first club and the place where I learnt my trade. I hope to get to the new stadium for a game or two as well.