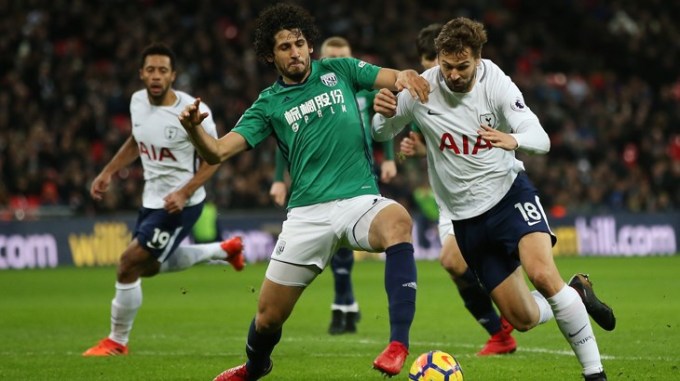 Spurs and West Brom, two teams with two completely different footballing ideologies, many thought our quality would outwit the struggling visitors who were without a win in there previous 11 games. That however, was not to be the case, Pochettino’s side didn’t produce an energetic attacking performance much like the one that saw us beat Dortmund away in midweek. Instead it was a slow and at times lethargic display, Spurs looked tired our players running out of options to carve through an impeccable West Brom defence. West Brom’s long ball game is something that were used to, it’s seen us come unstuck in recent seasons. Even though West Brom sacked their long term manager Tony Pulis last week, Gary Megson took temporary charge of the baggies though the tactics seemed identical to those of Pulis, long ball with a particularly defensive stance. That’s why it was such a big blow to our lads when West Brom took a surprise lead four minutes into the game. Spurs got caught in possession in there own half, former Spurs man Jake Livermore’s long ball setting the powerful Rondon through on goal, the Venezuelan internationals strength saw him shrug off Sanchez to advance into the box, before placing a shot inside the far corner of Lloris’ net, 0-1. West Brom had struck early and weren’t going to look for a second, they sat deep as Spurs looked to stamp their authority on the game but it was to no avail. Our attacking forays and crosses into the baggies area were meat and drink to the visitors, Jonny Evans and Ahmed Hegazy frustrating our forwards with their defensive prowess (especially in the air).

Eric Dier tested Ben Foster with a decent header late on in the half, but the intensity from Spurs was not there going into the interval. The second half saw a rejuvenated Spurs side take the game more to Megson’s side. We were dominating possession against a very deep lying side, we started to pass the ball around with a bit of zip and started to test Foster. But West Brom continued to hold firm, Trippier’s testing effort was blocked. Before Spurs produced a defence splitting move to finally breakthrough the baggies brick wall, Alli winning the ball off McClean before advancing down the right and whipping the ball across the face of goal. It was a fine cross which was met by Harry Kane to prod home, giving Spurs faith that they could get the winner in the remaining minutes. Sadly that winner never came, Spurs pushed the visitors far but still Pochettino’s team were just lacking a bit of creativity in front of goal. Kane and Alli came close to finding that winner towards the latter stages of the game, but it was the baggies who were to have two more golden opportunities of their own. First through substitute Hal Robson-Kanu’s powerful effort across the face of the goal. And then through the influential Salomon Rondon in the 95th minute after he met a promising cross, inside the Spurs penalty area but the striker could only hit the ball inches wide of Lloris’ goal, it should have been the winner!

I’m sure Mauricio Pochettino will be bitterly disappointed with how today’s game panned out, especially with all the possession (73%) his side had during the game and the gulf in class. As a fan sat high up in the stands at Wembley it was without doubt a hugely disappointing result for a number of reasons, big players such as Eriksen had an off day and didn’t manage to influence the game. We lacked a sharpness in our play especially in the final third which let us down on a number of occasions. Winks also had a bit of an off day, and the midfield partnership of him and Dier didn’t seem to propel us going forward, we lacked the physicality and skill of Dembele in the midfield areas. In all truth we looked tired, maybe the exertions of our performance against Dortmund in midweek took its toll. Anyhow we weren’t at the races today, but no one can expect us to grind out these results all the time even against struggling sides, our players gave there absolute all, but it just wasn’t to be on this occasion. Kudos to West Brom, who I thought were very good against us, they were well structured and defended brilliantly throughout the game, they were deserving of there point and I’ve no doubt they’ll stay up this season with performances like the one today. We go again on Tuesday with a league fixture away to Leicester, a similarly tricky game but one that I’m sure Pochettino’s lads will perform well in. COYS