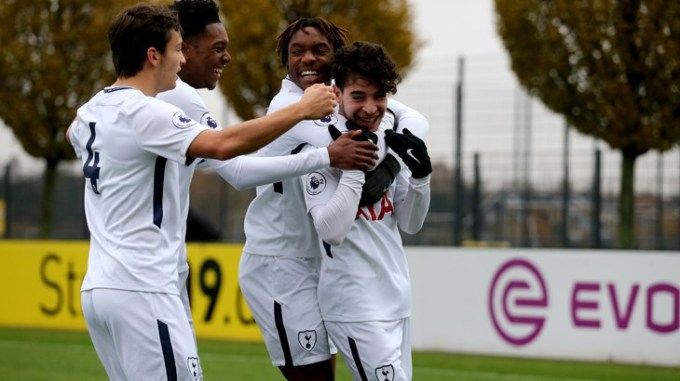 Spurs’ penultimate group game of their UEFA youth league campaign occurred yesterday, as Spurs travelled to Borussia Dortmund’s training ground to face the top of the table team. It was a spectacular and dominant display from Scott Parker’s lads, they dominated from the start, played intricate attacking football throughout and thwarted any creativity that Dortmund could come up with. The 3-1 victory for the lilywhites assures them of a place in the last 16, whilst a win against APOEL in the final group game will make sure they finish as group winners. Spurs got the game underway at Dortmund’s training ground as Spurs looked to assert there authority on the game. Tanganga made an important early block whilst the lively Samuel Shashoua done well to earn Spurs a corner down the left. The 18 year old then went on to embark on a jinking run down left, before setting Maghoma through, his first time effort being blocked by Unbehaun. Spurs’ bright start to the game saw them take an early and deserved lead courtesy of a fine move. It was an attacking move which saw Eyoma pass to Edwards down the right flank, he then picked out Shashoua in the box with a neat pass. Shashoua cooly slotting the ball into the bottom corner of Unbehaun’s net, 1-0. Spurs had put a foot hold on the game, dominating the central areas of the pitch Spurs soon pushed for a second.

And that second goal almost came a couple of minutes after our first, when Oliver Skipp’s brilliant curling long range effort cannoned off of Unbehaun’s crossbar, Skipp showing superb technique. It wasn’t to matter however, as Parker’s side doubled their lead on 18 minutes courtesy of some brilliant skill down the left from the potent Shashoua. It was a goal of real class which came about after a brilliant run down the left from the nimble footed Shashoua, managing to power his way past a Dortmund defender who got on a foot on the ball, only for left back Jaden Brown to slot home. It was a great finish from Brown who showed excellent feet to out wit a defender before tucking the ball home. Parker’s team were absolutely dominating the German club, Samuel Shashoua at the heart of Spurs’ attacking moves. Austin had been a spectator up until the 31st minute when an unfortunate goalkeeping error led to Dortmund pulling a goal back. Emre Aydinel’s free kick should have been a routine save for the youngster, but unfortunately Austin fumbled the shot which ended up squirming across the line, 2-1. Spurs threatened the home team soon afterwards through the lively Marcus Edwards whose run into the area and low centre of gravity, resulted in Osterhage bringing him down inside the box, with the referee immediately pointing to the spot. Unfortunately for Edwards (who has a remarkable penalty conversion rate) Unbehaun guessed the right way to make a top save to deny Spurs a two goal cushion.

TJ Eyoma made a decisive challenge at the other end to prevent a promising opening for Dortmund, but it was Spurs who were seeing more of the ball, creating a string of fine chances in the process. A long range effort was easily gathered by Austin before a lovely move late on in the half, saw them reestablish there two goal lead. It was an excellent goal which saw Spurs catch Die Borussen on the counter attack. Striker Kazaiah Sterling received the ball down the left flank after picking up an accurate Shashoua pass. Sterling continuing his foray towards goal before curling a sublime effort inside the far corner of Unbehaun’s net to give Spurs the lead that they so deserved going into the break. The hosts tested Spurs straight after the restart when Austin was forced into making a low save, but even though Spurs were less concerned on going forward, they continued to dictate the flow of the game. A quite comical moment occurred just after the hour mark, when a steward accidentally lifted the ball off the field of play when it hadn’t crossed the line, this resulted in some confusion for both sets of players and the referee, which resulted in Spurs giving Dortmund the ball, the last time I remember anything like that was in a senior game against West Brom some years ago. Dortmund had begun to play a more contained and defensive style of play as they looked to grow back into the game, this resulted in a far less entertaining second half. The ever impressive Shashoua done well to carry the ball away from a tricky situation, whilst the excellent Tanganga made an important block minutes later. Kazaiah Sterling forced Unbehaun into making an excellent save when he tried his luck with another curling effort from range. Meanwhile, 16 year old midfielder Paris Maghoma who had been brilliant in the centre of the park, almost scored a brilliant fourth for Spurs. After Unbehaun cleared the ball off his line, the confident 16 year old received the ball before trying a spectacular effort from over 35 yards out. And it almost came off were it not for a fine fingertip save from Unbehaun.

Substitute Jack Roles deep swinging corner was headed into the palms of Unbehaun by Tanganga shortly afterwards, Spurs had the game in control. Dortmund’s best chance of the half fell to Kampetsis on the edge of the Spurs box, his low drive flying inches wide of Austin’s goal. A late penalty shout from Sterling was waived away by the referee as Spurs went on to see out the game with a performance of the highest quality. COYS

Notable performances: Samuel Shashoua had the biggest influence on the game and was undoubtedly the man of the match. But it was an excellent team performance from Parker’s lads which saw them dominate every aspect of the game. Marcus Edwards was excellent with the ball at his feet and created some good chances, whilst Kazaiah Sterling’s fine movement and pressing up top resulted in him scoring an excellent goal. The defence was rock solid, Tanganga and Lyons-Foster snuffing out any dangerous balls that Dortmund tried to put through our defence. However, it was the performance of 16 year old Paris Maghoma in the centre of the park who won the most plaudits. I have seen Maghoma many times for our under 18’s this season and he has showed excellent potential. But his performance against Dortmund was his best so far, he was dominant in the midfield. Carried the ball well and advanced on many promising forward runs, playing his part in the third Spurs goal. I have a feeling the skilful midfielder will play a big part in our FA youth cup campaign which starts next Wednesday.

My man of the match: It has to go to winger Samuel Shashoua for a performance of the highest quality in Germany. The 18 year old starlet played a big part in all three of our goals, scoring one and creating two. And it’s not just his attacking play which was so impressive, all aspects of his play were top class against Dortmund. He tracked back well and pressed high throughout, and carried the ball out of dangerous situations deep inside his own half. The first team beckons in the not so distant future!

Great 3-1 win vs Dortmund, buzzing to get a goal and a couple assists ⚽️😁 pic.twitter.com/vhNI4KadXu