The forgotten story of Spurs’ famous FA youth cup winning side of 1973/74: 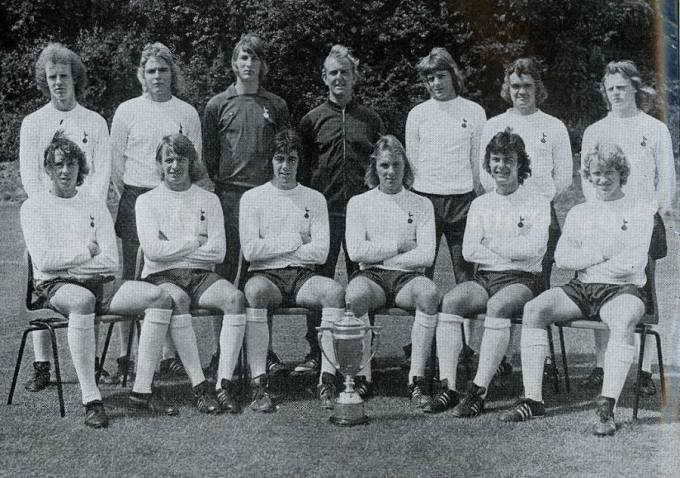 “It was probably the best moment any of that squad experienced in their football careers!”(Roger Gibbins)

Most Spurs fans will be unaware of Spurs’ triumphant FA Youth cup campaign of 1973/74. Under the tutelage of former Spurs assistant manager Pat Welton who led the under 18’s to the trophy for the first time a couple of years earlier, Welton led a talented group of Spurs youngsters to cup glory again in the famous 1973/74 campaign. I have long been intrigued by this team, unable to find much online over the past year, I contacted a key member of the side Roger Gibbins (who joined Spurs as an apprentice in 1971) who kindly agreed to do an interview with me (which starts below). Of the young Spurs players, many of whom went on to have successful footballing careers, was an array of talent. Roger Gibbins went on to have a blossoming career across all four divisions of the English football, notably at Cardiff City where he went on to become a house hold name. In the side there was the tricky winger and former Northern Ireland international Noel Brotherston who made one appearance for Spurs before going on to become a legend at Lancashire club Blackburn Rovers. Former Spurs men Neil Mcnab and Chris Jones are two more familiar names for Spurs fans, who were part of a young team that went on to forge successful careers in the game. This group of Academy players achieved a remarkable feat which if achieved in today’s game would have been plastered across the whole of social media, their names ingrained in the brain of every Spurs fan. Football for our current youth players has moved on a great deal since the mid 1970’s, but that same prestige and affection for the FA Youth Cup is still so evident in our current and recent under 18 sides.

Pat Welton’s side had to give their absolute all to make the final of England’s most prestigious youth football competition. Enduring some tough teams on route to the two legged final with Huddersfield. Spurs over came a brilliant young Leyton Orient side which included the legendary Laurie Cunningham. But perhaps the greatest achievement of that cup run was the semi final victory over bitter rivals Arsenal. To put it into context Arsenal probably had the best young group of players in England. An Arsenal which includes the legendary Irish trio of Frank Stapleton, Liam Brady and David O’Leary, Welton sides had a gruelling task to make the final. But they managed just that, overcoming an incredibly talented Arsenal team to book their place in the final against a physical Huddersfield side. The first leg at White Hart Lane ended in a 1-1 draw, forward John Margerrison getting Spurs’ goal, meaning Spurs had it all to do up in Yorkshire. The second leg was an incredibly close affair as Roger described to me. It went to extra time before none other than Mr.Roger Gibbins himself scored a dramatic late winner to achieve something that has only ever been achieved on three occasions in Spurs’ history. It was a fabulous and historic achievement for the young Spurs team of 74 and one in which meant a lot to the players and the club, in what was Bill Nicholson’s final season in charge of the senior team. The class of 74’s story is a remarkable and important one and it’s more relevant now than ever, with the connections with our club and producing youth talent so strong.

Roger and the group are legends of our club in their own right, they achieved a historic feat and we are all proud to call them one of our own. 43 years on from that triumphant cup campaign, our current under 18 side led by Scott Parker will be starting their youth cup campaign with a home tie against Preston on Wednesday week, as they look to make their mark on the history books of our famous Academy. COYS

Question1: What was it like being a scholar and training during that campaign?

Roger Gibbins: It was a brilliant time for me. I was a professional by this time playing regularly in the reserves and the campaign was so exciting. beating Arsenal in the semi final was the real highlight as they had such a strong side and were favourites.

Question 2: What are your greatest memories of being involved in that campaign?

Roger Gibbins: Beating Arsenal in the semi final and scoring the winning goal in the final!!!

Question 3: How did it feel to be crowned winners of the prestigious competition?

Roger Gibbins: It was one of the best moments in my whole career,very proud and felt on top of the world …… And Spurs had won it 3 or 4 years earlier I believe so it was great to emulate that team.

Question4: What was the season leading up to the final like for the team?

Roger Gibbins: Most of the team we’re regulars in the reserve team squad, so didn’t play in the youth team u-18 so much that season so to have a great FA youth cup run was special.

Question5: Who for you, were the standout players of the group?

Question6: Were both legs of the final close games, was it a fiercely fought final?

Roger Gibbins: Yes both legs were very fiercely contested, Huddersfield were a very strong physical side and there was really not much in either leg, as the scoreline suggests.

Question 7: Do you remember how you and the team celebrated winning the competition and what it meant to you?

Roger Gibbins: I remember we celebrated in the dressing room with a bottle of champagne being sprayed over everyone and we were so happy I can’t explain it in words! It was probably the best moment any of that squad experienced in their football careers!

Question 8: As a player who went on to have a great career, What did you take from that experience into your senior career?

Roger Gibbins: know Chris Jones and Neil McNab went on to play for the 1st team at Spurs, and players like Micky Stead, Ian Smith, Mike Robinson, Noel Brotherstone ,Wayne Cegeilski, Andy Keeley & John Margerrison went on to play League football, but I think I was the player who had the longest career, playing 596 league games in all 4 divisions until I retired in 1993 at 37 years old.

Question 9: The late Noel Brotherston who played once for Spurs’ senior team, went on to become a Blackburn legend and international with Northern Ireland, what was the skilful winger like to play with?

Roger Gibbins: Noel was a very talented player and a quite shy unassuming lovely young man.Very good player to have in your team as he liked to have the ball, take players on, and deliver into the penalty area, he was a great outlet for us. A very sad day when he passed away far too young.

Question10: Are you still in touch with your fellow squad members of that campaign?

Roger Gibbins: Unfortunately I am not in contact with any of them!!!!!  It was 43 years ago mind you!!! …. it would be so lovely to have a reunion …could you arrange that?

Question 11: Finally, with the new FA youth cup campaign about to kick for Spurs’ current under 18’s side, with a home tie against Preston ‪next Wednesday‬. What would your advice be to the Spurs youngsters, many of which will be getting their first taste of the competition.

Roger Gibbins: Well the game has changed so much in the last 43 years, and I am sure the boys will be well prepared by the coaches at Spurs for this game and hopefully a good campaign …. but one thing I would say and this hasn’t changed in all these years: It’s a team game and generally the team that has the most desire, passion, team spirit and togetherness will come out on top …. that’s what we had in 1974! Good luck to the Spurs boys of 2017-18 👍

One thought on “The forgotten story of Spurs’ famous FA youth cup winning side of 1973/74:”