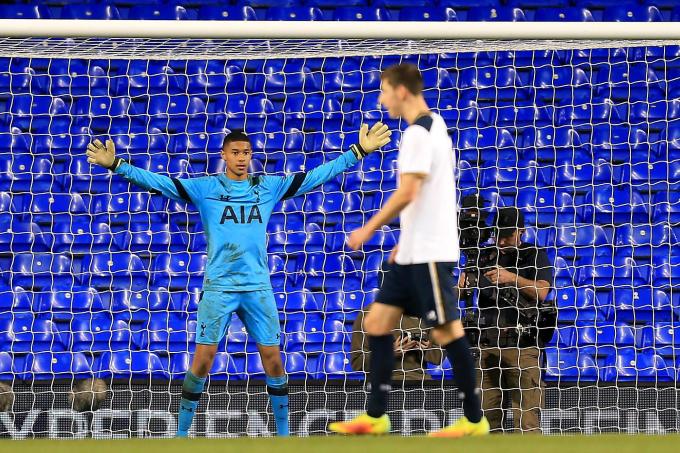 I started writing this piece on Spurs academy goalkeeper Brandon Austin (18) yesterday, I’d been meaning to write something on the highly rated USA youth international for some time now following the many heroic performances his pulled off for our youth teams over the past year. Unbeknownst to me Austin today signed a new contract which was announced today by the club. The new deal which will take him up until 2019 is a great reward for a player who has developed into one of the finest goalkeepers in the PL2. I don’t write articles on our goalkeepers too often, especially those within our academy. Amongst a plethora of talent at Hotspur way, we have a number of brilliant young goalkeepers that are rising through the ranks. Tom Glover, Alfie Whiteman, Jonathan De Bie, Charlie Freeman and Joshua Oluwayemi are but a few to name. However, since the beginning of last season no other keeper than that of Brandon Austin has impressed me more. With his cat like reflexes and ability to collapse his body at the vital moment to make a stunning save, Austin’s all round game has come on leaps and bounds. The teenager from Hemel Hempstead was a pupil at the same school as fellow Spurs starlet Harry Winks. Joining Spurs from Chelsea’s famous youth academy, Austin was a talented basketball player whilst at school, his family ties to sport come from his father, a one time professional basketball player. However, it’s the promising youngsters expertise in between the sticks which is what I’m focusing on, having watched him play extensively over the last year and a half, I’ve been able to see Austin develop rapidly from a first year scholar having to battle for a spot between Alfie Whiteman and Tom McDermott.

To becoming a mainstay with in the development squad as well as having travelled with Pochettino’s senior side on a number of occasions. It comes as no surprise to me that the USA youth international has been awarded a new deal for his performances over the course of the last season, of which have been nothing short of magnificent. In many ways being a goalkeeper is almost like a sport of its own, isolated and cut off from the flow of the outfield game it’s easy to under appreciate their all round ability. Austin is a keeper of immense potential his all round game is very good for that of a young man, he’s so confident and assured, dominant in the air and commanding of the defenders in front of him. But it’s Austin’s shot stopping ability and positioning that are so impressive. His reflex saves such as the ones he made during his man of the match performance against Chelsea in the youth cup last season, are very special indeed. A recent game in which he won plaudits for was the under 19 game away to Real Madrid, where Austin produced no fewer than 8 crucial saves to keep Spurs in the game, of which half of them were outstanding saves. It’s one of the youngsters footballing heroes that he reminds me of, a certain Petr Cech. It’s hard to compare goalkeeping traits but Austin’s sheer focus and overall play remind me of the world class goalkeeper. Brandon has been first class all season and I’m delighted for him on his new contract, under the tutelage of the fantastic Toni Jimenez and the coaches at Hotspur Way, the young Spurs man is a player of huge potential, and one in which I look forward to seeing develop further.

Delighted to have signed a new contract with @SpursOfficial 😄 https://t.co/sUwoRUoOeg