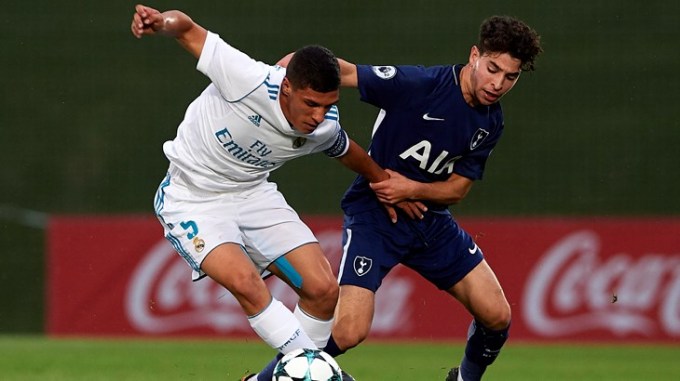 On a night where are senior squad put in one of their finest performances since Pochettino took charge, it would be easy to forget about how good a job Scott Parker’s side done just a couple of hours before hands on Tuesday evening. Following the sheer elation of that game I thought I’d take a day or so to saviour that result, before writing this report. Played at the sparsely attended Alfredo Di Stefano stadium, and if I’m going to be honest it did feel a bit odd watching this group of players on the big screen. Parker and Mcdermott will undoubtedly view the 1-1 draw achieved in Madrid as a big success, not only was it a vital away point that we picked up. It was also a top team performance which showed off how great are players really are. It was a steady start to the game, Spurs containing possession in the opening minutes. But it was the young lilywhites who were to make the first meaningful attacking foray, when Keanan Bennetts dangerous curling cross was cleared by a Madrid defender on 8 minutes. Then, mere seconds later Jack Roles cut a lovely pass back to Edwards, whose following attempt forced Fernandez into action. A long range effort from Oscar flew over Austin’s crossbar as the home side looked to respond. Then followed another brilliant chance for Spurs, when Roles’ sublime through ball sent the onrushing Sterling through on goal. However, Sterling’s tame low effort was saved comfortably by Fernandez, as Real Madrid were let off the hook again.

Spurs were really taking the game to Real Madrid as they created some good chances going forward. The prominent Jack Roles whipping a dangerous ball across the face of the goal, then young Tariq Hinds embarked on a promising run down the right flank, before curling an effort wide. Parker’s lads looked incredibly organised and were snuffing out any danger that Real produced, limited mainly to long range efforts. One of which was easily gathered by Austin on 25 minutes. As the rain came gushing down so did the opening goal, when Spurs took a much deserved lead just before the half hour mark. The move all started after Samuel Shashoua went on a brilliant attacking run down the left before sending a delightful cross into the box. Which was met by an off balance Sterling, whose effort was parried away by Fernandez into the path of Edwards who quickly laid the ball off to none other than Jack Roles who had managed to find an empty pocket of space, the Cypriot youth internationals emphatic finish putting us into a deserved lead. Baeza’s dipping effort was well saved by Austin as the home team looked to find a quick equaliser, but the scores should have been level after Oscar received a lovely lofted pass in the area, but he couldn’t convert. Then came a dangerous free kick, conceded by Lyons-Foster on the edge of the area, but Oscar’s resulting effort sailed high and wide. 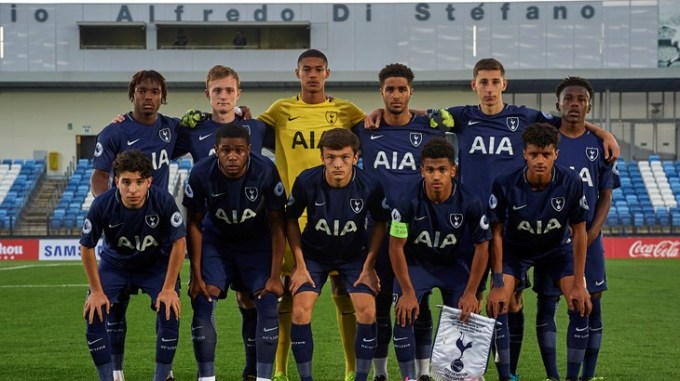 Our lads almost doubled their lead on the stroke of half time when the creative Shashoua curled in another peach of a cross to Sterling, whose header forced Fernandez into making a spectacular reflex save, it had been all Spurs in the first 45. The second half suited the home side better, they came out and showed more quality in the final third. Lyons-Foster getting a vital head on the ball to deny a Real Madrid player a clear goalscoring opportunity, then the potent Oscar came close to levelling, when his side footed effort on the edge of the area flew just over Austin’s bar. Kazaiah Sterling felt hard done by when the referee didn’t award a penalty at the other end when he was brought down from behind by a defender, as Spurs continued to pressurise the home side. Despite Madrid’s resurgence in the second half our lads continued to create good chances of their own. The lively Marcus Edwards playing a nice ball in to Sterling which was only intercepted by a Real defender.

An attacking onslaught by Real Madrid followed, Gomez’s deflected effort dipping just over Austin’s goal, only due to a vital block from Skipp. A good save from Austin followed, but he could do nothing to prevent Real’s equaliser on 71 minutes. When Gomez managed to poke home a dangerous cross from the left, leaving Austin helpless in the goal as it flashed past him. Real were passing the ball about well and were growing in confidence following their leveller. 17 year old Reo Griffiths came on to replace Roles as Parker looked to inject some pace into the game. A brilliant curling free kick from Oscar on 81 minutes was tipped over the bar by Austin as Real Madrid pushed for a winner. Massively important blocks by Tanganga followed as Real Madrid edged dangerously close to a late winner. A teasing ball across the face of the Spurs goal was only missed by the tiniest of margins by Gomez, as Spurs continued to defend really well. A brilliant diving save from a magnificent Austin thwarted Vacas Ruiz’s powerful effort. Then the colossal defending of Tanganga saved us yet again, when he made a heroic late interception.

Madrid continued to trouble us, carving through our defence on another occasion late on, Baeza forcing Austin into a low save from close range. Then followed a great late chance for Spurs when substitute Paris Maghoma slipped through the onrushing Griffiths but his pass couldn’t quite find Sterling in time. A hugely entertaining game ending in a brilliant 1-1 draw for Parker’s young side a brilliant, brilliant performance from our lads. COYS

Player reviews:
– Brandon Austin: Made no fewer than eight saves, his presence in goal was immense, made some crucial and really difficult saves to secure the point, looked very confident.
– Tariq Hinds: Really good going forward, also looked very assured defensively.
– Keanan Bennetts: Not as attacking as usual from left wing back, but Bennetts was very solid defensively.
– George Marsh: Was immense in the holding midfield position probably his finest performance this season, Marsh was flawless and effective.
– Japhet Tanganga: I was very close to awarding Tanganga man of the match for his performance against Leicester on Friday, but he done more then enough to secure it for his performance in Spain. Heroic was an understatement, I lost count of how many vital last ditch challenges Tanganga made in the box, he was rock solid in every aspect of his game. His long range passing was also superb, as always. I’m still to think of who he reminds me of, but he really is a brilliant prospect!
– Brooklyn Lyons-Foster: Really assured performance from the 17 year old, so decisive and calm in his defending and overall play.
– Jack Roles: It was only his first start of the season unbelievably, and Roles made a great impression on Tuesday evenings game. He was tidy and creative from the centre of midfield, but it was his special ability to find pockets of space which was so effective. Roles is so clinical in front of goal and his brilliantly taken one against Real Madrid certainly won’t be his last of this season.
– Oliver Skipp: Typically influential performance from the 17 year old starlet, his pressing, defending and dominance of the midfield rightfully winning him many plaudits from fans.
– Kazaiah Sterling: Could have had a brace on another day, really positive display, got into great positions.
– Marcus Edwards: Lively and creative down the right wing.
– Samuel Shashoua: Yet again Shashoua had a profound impact on the game, he was one of the main sources of creativity in the game, his runs, crossing and balance were all top draw. He created the first goal.
– Reo Griffiths: Decent cameo.
– Paris Maghoma: Bright cameo, looked good on the ball. Still only 16 years of age.

My man of the match: Japhet Tanganga. I was very close to awarding Tanganga man of the match for his performance against Leicester on Friday, but he done more then enough to secure for his performance in Spain. Heroic was an understatement, I lost count of how many vital last ditch challenges Tanganga made in the box, he was rock solid in every aspect of his game. His long range passing was superb as always. I’m still to think of who he reminds me of, but he really is a brilliant prospect!