“At 4-2 down we never stopped competing, never stopped running and never stopped working. We had three or four decent chances, with about 10 minutes to go we had an excellent chance, could have made it 4-3 and then anything can happened but the players kept going which we expect, although we just fell a little bit short today with our decision-making with and without the ball.” (Wayne Burnett)

Our under 23’s played out a highly entertaining contest with PL2 table toppers Liverpool on Friday night, as Wayne Burnett’s side fell to a 4-2 defeat against the Reds at Anfield. Though it was a disappointing result for the team, I left Anfield proud of our teams performance and work rate. Neil Critchley’s Liverpool oozed class, they were like watching Jurgen Klopp’s senior team. They had an array of attacking talent which pushed us to the limits, they were incisive in their passing and devastating on the counter attack, it was certainly no disgrace to lose to a side who’ve won their first six league games of the season. Burnett’s team were resilient as they fought back from a two goal deficit, to make it 2-2 against a possession based Liverpool side, who controlled the second half. Proceedings got off in the worst possible way for Burnett’s side, when an attacking reds side opened the scoring inside just 30 seconds. Spurs were desperately unlucky to fall behind so early on after Maghoma’s header unfortunately came to Wilson inside the box, the Welshman sending a looping header at goal which dipped over Austin, 0-1. Burnett’s side fell under the cosh as Liverpool’s attacking exploits tested the youngsters resolve, two important interceptions by Tanganga inside the first 5 minutes, stopping Liverpool from extending their lead. A dangerous free kick from Pritchard followed at the other end, as his effort flew straight into the palms of Kelleher, as Spurs struggled to get a grasp on a Liverpool side who oozed attacking quality and panache.

Welsh international Ben Woodburn flashed an effort across the face of Austin’s goal, as the reds went in search of goal number two. Shortly afterwards, potent striker Rhian Brewster went close after being played through on goal. The centre forwards first attempt was thwarted by Austin, with the young Brewster’s follow up somehow slicing wide of the goal, as Spurs escaped a two goal deficit. Critchley’s rampant Liverpool side were not lowering their tempo, and on 16 minutes they were rewarded for their early efforts. Spurs were dealt a further blow as Wilson bagged his second of the game. After Markovic embarked on a powerful surging run, the Serbian held the ball up inside the penalty area before teeing off Wilson, who slotted clinically inside the far corner of the net, Burnett’s side were totally under the cosh. In a positive turn of events, Spurs’ first meaningful attack gifted them a way back into the game, after Kazaiah Sterling was brought down inside the box by Jones, as the referee pointed to the spot. Edwards confidently stood up to take, as his penalty curled into the top corner, a great penalty, taken with such composure. This was becoming a really enthralling game, as Spurs carved their way back into the flow of it. And we were unlucky not to have been given a second penalty soon after our first, after Edwards who received a pass from Duncan inside the area was brought down, my first instincts were penalty, but the referee wasn’t to follow up as he waved play on. Despite our resurgence, Liverpool remained in control of the game. Brewster embarking on a weaving run down the left side of the box as he managed to get past Maghoma before squaring to Wilson. Whose effort was deflected wide for a Liverpool corner. Marko Grujic’s powerful effort at goal was vitally blocked by Tanganga, as the reds looked to restore the two goal cushion. 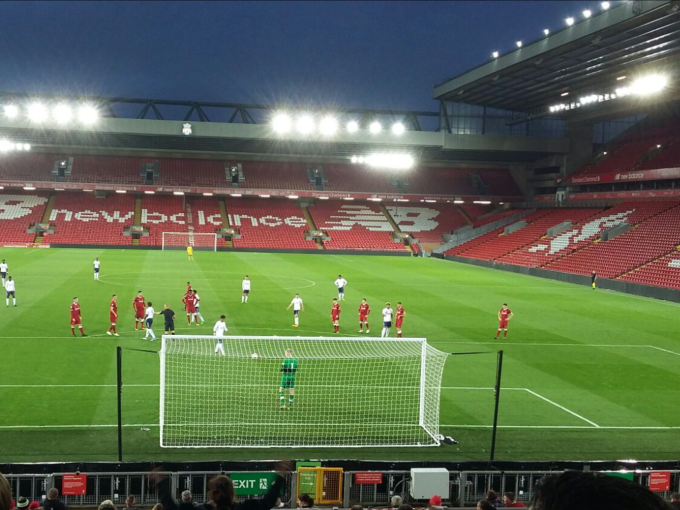 Brewster almost made it three for the home side after he got on the end of a cross inside the area, only to smash the ball off of Austin’s crossbar. A slight scuffle between the two sets of players after George Marsh was fouled shortly after his introduction, disrupted the game for a couple of minutes, as Tanganga was booked for his part. Then in a most remarkable turn of events, a resurgent Spurs side drew level. After prominent winger Keanan Bennetts worked his way into the box, the ball eventually came to Maghoma who showed the composure of a top centre forward, to superbly curl it into the top corner of Kelleher’s net, the centre halves second goal of the season. Spurs were bombarding the home side, as Spurs looked to end a dramatic half on a high. Maghoma forced a close range stop out of Kellleher, then seconds later Bennetts played through Sterling down the left side of the area, his powerful effort being well saved by Kelleher. Spurs were playing brilliantly, as they pressurised Liverpool into making errors, though Liverpool were still dangerous on the break. Woodburn’s long drive failed to test Austin minutes earlier, but it was Critchley’s side who would retain their lead at the end of a pulsating first half. Liverpool attacked us with real ferocity, as the brilliant Harry Wilson claimed his hat trick. The Welshman receiving Woodburn’s lay off on the edge of the area, Wilson cut inside before beating Austin with a low curling effort, 2-3.

The second half started well for the reds who almost extended their lead on 48 minutes, when Woodburn’s powerful low effort was only denied, because of an outstanding reflex save from Austin to thwart the 17 year olds seemingly certain goal. However, Liverpool were to succeed when Rhian Brewster made it 4-2 to the reds on 50 minutes. Lloyd Jones’ brilliant long ball was met by Brewster inside the area, as the youngster sent a delicious lob over Austin to cap off an admirable piece of play from the home side. Even though Liverpool were dominating possession Spurs were maintaining their high pressing game as they looked to get back into the game. They went close after Edwards surging forward run, ended in the forward slipping in Sterling inside the box. However, the centre forwards effort from a tight angle was lashed over Kelleher’s crossbar. Liverpool were playing wonderful attacking football which continued to see them go close. Woodburn’s long range effort going narrowly wide on the hour mark, as Burnett’s lads struggled to contain a rampant and relentless Liverpool side, who just wanted to play fast attacking football. Spurs did respond however, Edwards going on a brilliant run down the right, which ended with a low shot from Marsh being comfortably gathered by Kelleher.

Then, on 70 minutes Pritchard lashed over from long range as Spurs struggled to threaten an in control Liverpool side. Burnett’s team were then given a scare, after Austin rushed out to clear the ball. Austin’s clearance came to hat trick hero Wilson who almost caught him out with a dipping effort. Spurs continued to look for a route back into the game, Edwards slotting through Sterling inside the Liverpool box, as the youngsters powerful effort forced another fine save out of Kelleher. Burnett was frantically urging his team to attack as the game neared an end, the rain lashing down. And Spurs ended the game solid at the back, as a late flurry of chances were halted by Spurs’ defence. Dhanda’s dangerous free kick was easily held by Austin minutes before, Ejaria’s promising cross was flicked inches over the crossbar by Brewster. An important late block by Christian Maghoma to stop Wilsons late effort meant the game ended in a deserved 4-2 victory for Critchley’s side. However, Burnett’s battling side can hold their heads high after putting in a commendable performance against a very good Liverpool side. COYS

Player reviews:
– Brandon Austin: Couldn’t of done anything about goals, made some fine stops including a stunning reflex save in the second half.
– TJ Eyoma: Had a decent game at right back, was solid defensively.
– Christian Maghoma: I thought Maghoma and Tanganga had really positive games last night, yes four goals may have been conceded. But none of which were as a result of the centre halves. Maghoma was brilliant in the air, but he was also very efficient in his tackling at the back. Took his goal as well as Harry Kane would have.
– Japhet Tanganga: Had a very good game, impressed me yet again. Solid and composed in his play, made some really important blocks, and his positioning was also very good.
– Jaden Brown: Efficient and hardworking at left back, good shift.
– Luke Amos: Effective and tidy in the middle of the park.
– Dylan Duncan: Did a fine job, but was forced off early on through injury.
– Marcus Edwards: Did very well on occasions down the right, went on some brilliant runs and created numerous chances for Sterling. Despatched his penalty with real class.
– Joe Pritchard: Played deeper against Liverpool, the skipper had a good game. Won a lot of balls in the midfield.
– George Marsh: Added steel to the game, did his defensive duty very well.
– Keanan Bennetts: A player who has come on leaps and bounds over the past year. Bennetts put in a great performance on the left wing. He looked dangerous every time he had the ball at his feet, had the Liverpool defenders sweating, with his creative forays into the penalty area, had a big influence in Maghoma’s goal. Very influential!
– Kazaiah Sterling: Can be very proud of his performance at Anfield, he may not have got on the scoresheet. But Sterling put in a fine performance. Made some really good runs, pressed Kelleher really high throughout the game. And won us a penalty, I rate Sterling very highly.
– Shilow Tracey: Pressed high, had a positive effect on the game from the bench.
– Samuel Shashoua: Despite it being a short cameo, Shashoua showed his creative talent, with good movement on and off the ball. He also embarked on numerous take ons.

My man of the match: Keanan Bennetts. Even though he was substituted on the hour mark, I felt Bennetts was our most influential player during the game. A player who has come on leaps on bounds over the past year. Bennetts put in a great performance on the left wing. He looked dangerous every time he had the ball at his feet, had the Liverpool defenders sweating, with his creative forays into the penalty area, had a big influence in Maghoma’s goal. Very influential!