Some thoughts on Spurs’ stalemate with Swansea: 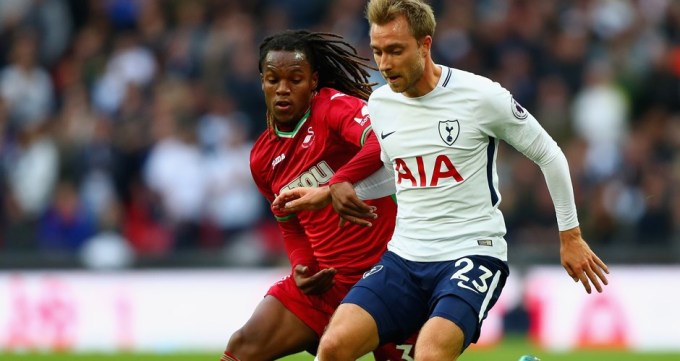 Spurs’ goalless draw with Paul Clement’s Swansea at Wembley stadium, was the last thing Spurs fans would have expected following their energetic and highly impressive 3-1 victory over Borussia Dortmund in midweek. Having just come to yesterday’s game from our under 18’s victory over Leicester on the same afternoon, I was looking forward to seeing what I thought would be our first league win at Wembley. I expected us to play that same high pressing and penetrating style of football that we had seen over the past two games. Whilst we weren’t disappointing going forward, Pochettino’s side had come up against an impeccable Swansea defence. Clement had set his side up for one thing only, a draw. The back three of Mawson, Fernandez and Van Der Hoorn were immense. It was a dull game, the first half seeing Spurs have all the possession but unable to create any clear cut chances. The negative set up of the visitors stifled our creative play, the lack of pace down the flanks also not helping matters. Kane’s dipping long range free kick was our best effort of the half, only being denied by a fine stop from Fabianksi. Our penetrating attacking play didn’t really change in the second half, Pochettino’s tactical change. Which saw the swapping of make shift wingback Son with Sissoko, improving us going forward, the South Korean international was good going forward and had a couple of good efforts of his own. The second half also saw the introduction of Serge Aurier who had such a positive debut in midweek his pace and power helped us going forward, but the attacking trio of Kane, Alli and Eriksen just couldn’t convert.

When Kane’s close range effort cannoned off the crossbar on 56 minutes you just knew it wasn’t going to be our day. We lacked that spark or pace of a player that could turn a game on its head. It’s quite extraordinary when you take a look at the games statistics, 75% ball possession for Spurs to Swansea’s 25% and our eight shots on target to their zero are pretty mind boggling when you consider the outcome of the game. However, regardless of our domination of the game on a possessional basis, I still don’t feel that warranted us the victory. Pochettino’s side were on the back of a midweek high, with the excellent result against Dortmund taking a lot out of them. Spurs didn’t replicate that same dynamic style of play. Which absent players such as Dembele and Ben Davies were a part of. Whilst we were certainly unlucky not to have scraped a win yesterday, the impeccable defending of the visitors strangled our creative play, they were closing us down all over the park and for that you can’t help but give them credit for their point. Trippier’s excellent late, long range effort almost won us the game in spectacular fashion but despite all the lads effort, it just wasn’t to be our day. For all the criticism Moussa Sissoko got from yesterday’s game it’s worth remembering that crucial last ditch challenge that he made in the first half, which could of so easily swayed the game in the swans favour. Our captain Hugo Lloris sums up the game in a nutshell: “It was a good performance, yes, but not enough. Okay, we had some chances but we need to start the game in a better way and to be more aggressive in the first 10 or 15 minutes. Swansea came here for a draw and to keep it at 0-0 as long as possible. We tried and tried until the end but unfortunately we ran out of time.”

We’ve got an important league cup tie with Barnsley in midweek which I’m really looking forward to. And if we get back to winning ways against the championship club with a good display, then I for one will have already forgotten of the frustrating draw to Swansea. COYS

30 – Tottenham have failed to score for the first time in 30 PL home games, since a 0-1 defeat to Leicester in January 2016. Frustrated. pic.twitter.com/DCuf4a1oT0