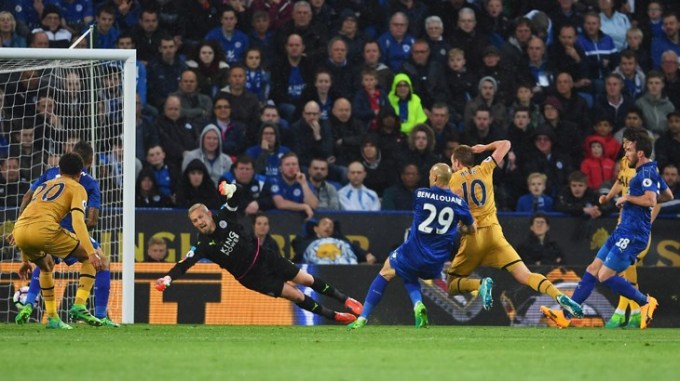 A performance of sheer brilliance from Pochettino’s confident Spurs side, saw the Lillywhites tear last seasons title winners Leicester City apart on their own back yard, in what was one of the most exhilarating and complete performances of a tremendous season for Spurs. A remarkable performance from Harry Kane which saw him bag four goals! And a brace for Son Heung-Min saw Spurs win with an emphatic 6-1 victory over the foxes. The first half was one of the most complete halves of the season for Spurs, their attacking brilliance and free flowing style of play tore the foxes defence to shreds, there was no hangover from last Sunday’s victory in the final game at White Hart Lane. Pochettino’s side were sharp, stylish and hungry, they oozed with class from the minute go. Spurs were playing with even more creative freedom than usual, which was clear to see in the opening minutes with Son and Kane both going close to opening the lead after some nice attacking football. Spurs were incisive and were constantly looking to run at the Leicester defence, it was no surprise when we took the lead through Harry Kane on 25 minutes. In what was a lovely bit of play, Son played a clever cut back from the wing, into the feet of Kane who slotted the ball home, 1-0 Spurs. Spurs were brimming with confidence and a second goal duly followed nine minutes later through a wonderfully worked goal. It came after some great link up play with Dele Alli, the England international delightfully chipping the ball through to Son who swivelled inside the box before volleying the ball home, to put Spurs into a comfortable two goal lead into the interval. 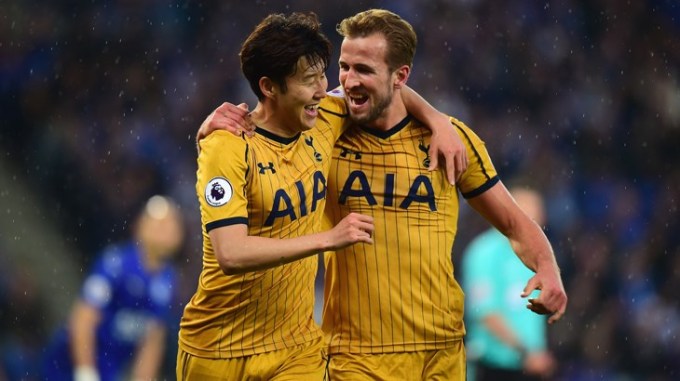 The home side grabbed a goal back on the hour mark through young left back Ben Chilwell, who managed to take control of the ball after a last ditch clearance from Lloris. Chilwell tucked the ball home despite the best efforts of Jan Vertonghen on the line, 2-1. We soon found our way back into the game, getting our third through Harry Kane just four minutes after Leicesters goal. Alderweireld’s cross being met by Wanyama who headed the ball across goal to Kane who comfortably nodded the ball home. We put the game to bed a couple of minutes later when Son got his second of the game after a wonderful solo effort. Son showed great feet as he managed to turn the ball on to his right foot before curling a long range effort low into the far corner of the net, 4-1. Kane then got an emphatic hat trick on 89 minutes, after being set up by debutant Filip Lesniak, Kane decided to let fly from 18 yards, with the ball nestling into the back of the net. Deep into stoppage time Harry Kane put the icing on the cake with his fourth of the game in a goal that was similar to the previous one, putting Spurs 6-1 ahead. The final score Spurs 6-1 Leicester, a remarkable game from Pochettino’s sparkling side, they were simply unstoppable. We may not have won the league, but we have without doubt played the most entertaining football in the league this season. We play our final game of the season away to already relegated Hull on Sunday afternoon. COYS

Additional notes: A big congratulations to Filip Lesniak who made his Spurs debut against Leicester. It was also great to see talented 18 year old winger Samuel Shashoua make the bench, whilst young striker Kazaiah Sterling was also part of the travelling squad.

Player review: – Hugo Lloris: Another good performance from Lloris who made four saves against the foxes.
– Toby Alderweireld: As composed and as effective as ever, a fine performance from the Belgian centre half.
– Eric Dier: I thought Dier had an excellent performance, he made some vital blocks and was so tidy throughout the game.
– Jan Vertonghen: Arguably our player of the season, Vertonghen was solid and decisive in his decision making.
– Moussa Sissoko: Though lacking in confidence I thought Sissoko was defensively sound at right wing back.
– Victor Wanyama: Masterful performance from Wanyama who dominated the centre of the park.
– Mousa Dembele: Was as sharp and as influential as ever despite missing the last few games through injury.
– Ben Davies: Really good defensive performance from Davies who also got the assist for Kane’s fourth goal.
– Son: So effective, Son was very creative, his two goals being testament to his wonderful performance. Son now has 20 goals this season!
– Dele: Showed brilliant feet with some lovely silky skills, also assisted Son for his first of the night.
– Harry Kane: Words cannot do justice to describe how fantastic Harry Kane was in his four goal game, against Leicester!
– Filip Lesniak: Really positive debut for the 21 year old academy player, Lesniak looked very comfortable during the couple of minutes that he played, and he also managed to set up the goal for Kane’s hat trick.
– Vincent Janssen: Done a decent job when coming on, held up the ball well and looked a threat.

My man on the match: The incredible four goal Harry Kane, who wowed the King Power stadium with an exceptional performance. Kane is now the top scorer in the premier league with 26 goals!

5 – Harry Kane is the fifth different player to score 3+ hat-tricks in a @PremierLeague season. Treble. pic.twitter.com/E0iULsRPOd