Spurs’ 2-0 victory over Arsenal was a defining moment in what has been an outstanding season for Pochettino’s side:

For the first time in 21 years Spurs confirmed that there would be no St Totteringham’s day, as Mauricio Pochettino’s side defeated bitter rivals Arsenal 2-0 in an enthralling north London derby at the Lane. In what was the last ever north London Derby at white hart lane, Pochettino’s side outclassed the gunners from start to finish, totally outwitting them. In many ways it was quite surreal for us Spurs supporters, seeing our team far superior in quality to Arsenal for the first time in over two decades. There was an air of confidence ahead of Sunday afternoons encounter, the deafening roar of the terraces and the expectation from the fans had everyone at fever pitch. The opening stages of the game saw a cautious approach from both sides, neither team wanting to leave themselves open to counter attacks, with the stakes so high. But it wasn’t before long that Pochettino’s side started to take control of the game, they produced numerous chances including a sitter that Christian Eriksen ought to have put away from close range, his effort crashing against the cross bar much to the despair of the Spurs faithful. We were testing the ever alert Peter Cech, with Arsenal offering little bar a fine effort from Aaron Ramsey to threaten Hugo Lloris’ goal. The atmosphere was building within our cherished stadium for the second half, we were all waiting for Spurs to strike. The Lillywhites raised the tempo for the second half and it wasn’t long before we broke past Arsenal’s unusually defensive stance, with Dele Alli breaking the deadlock on 55 minutes. 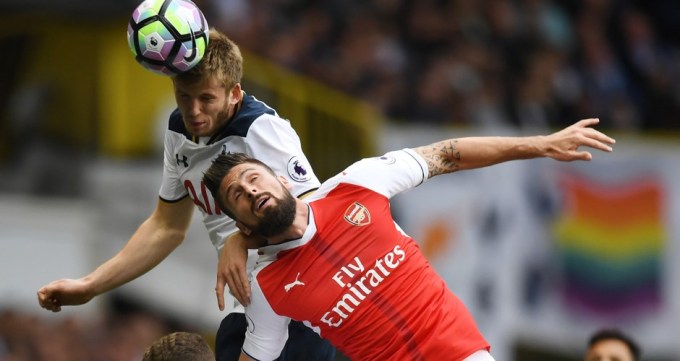 After Christian Eriksen’s good run inside the penalty area the Dane saw his deflected effort go between a cluster of Arsenal players, and who else was there but Dele Alli to poach the ball home, to send the Lane into scenes of delirium. It was a mere three minutes later when Spurs doubled their advantage in thrilling circumstances, Harry Kane was brought to the floor in what was a stone wall penalty, our talisman stepped up as composed as ever to tuck a delightful penalty into the inside corner of the net, leaving Cech rooted to his spot. Our second of the game had well and truly flattened Wenger’s already depleted side, we dominated for the remainder of the game forcing some phenomenal saves out of Cech. The scenes of jubilation in the home end was really special with many supporters staying beyond the end of the game to continue singing in appreciation to their brilliant team. Pochettino’s post match quote sums up the brilliance of this team: I said at half-time to keep going. We changed a little our positions in offensive situations, we tried to find better positions and better solutions to create the chances. In the end it was a fantastic performance and we deserved the victory.”

It was yet another breathtaking performance, which despite the lack of offensive threat posed by Arsenal, was won by the defence. The sheer magnificence of Jan Vertonghen and Toby Alderweireld saw every slight bit of danger snuffed out, Vertonghen was my man of the match and I shall have an article on his performance published by Tuesday evening. Harry Kane lead the line with aplomb, it was a battling and ultimately rewarding performance from Kane. Our side oozed in creativity with Eriksen and Son, but it was also a tenacious performance. Eric Dier and Victor Wanyama’s presence in the centre of the park was immense, it truly was a game to saviour. Chelsea’s results are out of our hands they still lead by four points at the top, and will likely be crowned champions by the end of the month, but what’s important to our side is to play every game with the same tempo, the same hunger and style. We’ve got four massive games left, we’re on an incredible run and under Pochettino we’re quite frankly over achieving, Sunday’s game was testament to the exceptional season Spurs are having. COYS!

Atmosphere was amazing, thank you to all the fans.. north London is ours!! 💪🏽⚽️ #COYS pic.twitter.com/PzGiteilBD