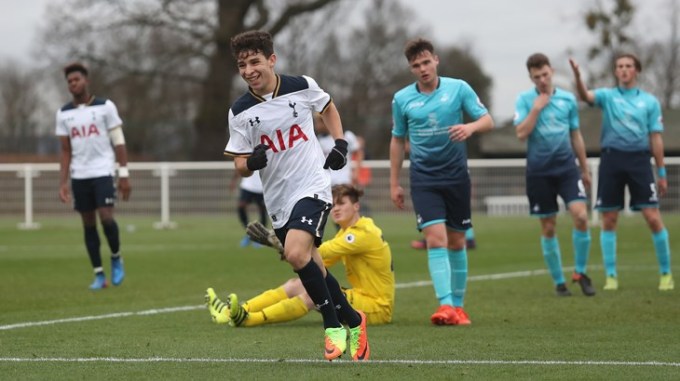 On Tuesday afternoon our under 18’s side continued their intense schedule of fixtures, as they recorded a terrific 4-0 victory over Swansea City. John McDermott’s Spurs side were sublime and played some wonderful attacking football, as they dismantled bottom of the table Swansea. Instead of doing an in depth report, the following will just be a concise report of the game, which will include player reviews. Spurs tore Swansea to shreds at Hotspur way, their fast attacking football causing a major headache for the opposition. Young right back Tariq Hinds netted Spurs’ first of the game, after he latched on to the loose ball inside the box, after Shashoua had sent in a low cross, and Hinds showed the alertness of a centre forward as he tucked the ball home, Hinds first goal at under 18 level. We were dominant and Swansea were helpless to stop us. On the half hour mark, Hinds struck again, curling a superb long range effort into the top corner. Early in the second half Jack Roles channeled his inner Frank Lampard, pouncing on a loose ball inside the box, the box to box midfielder needed no asking as he slotted the ball home. The third goal essentially ending the game as the depleted Swansea side done their best to suppress our countless attacks. The good vision of Keanan Bennett’s saw the winger pick out Samuel Shashoua for Spurs’ fourth of the game on 56 minutes. Bennett’s finding Shashoua, whose deft touch saw him find a pocket of space which he converted with aplomb. Spurs could have had many more goals in the remaining minutes but it wasn’t to matter, McDermott’s side had achieved a memorable victory and showcased their superb talent ahead of Mondays massive FA youth cup tie with Newcastle on Monday. 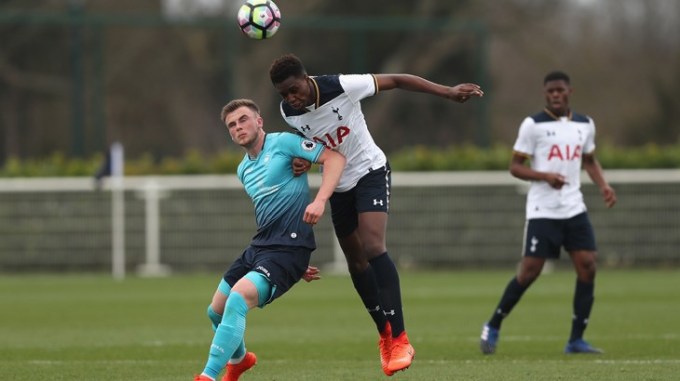 Our under 18’s were also in action this Saturday, due to the FA youth cup match on Monday, the squad consisted mainly of under 16’s. And the young Spurs side put in a good effort against a top Villa side, narrowly losing 2-1 at villa’s Bodymoor Heath training ground.

Player reviews:
– Brandon Austin: A spectator for almost the entirety of the match.
– Tariq Hinds: An exceptional performance from Hinds as he netted a brace, he showed just how good he is getting forward as he is defending, a tremendous performance.
– Matt Lock: Lock had an excellent game against the swans, he impressed down the right flank with his excellent ball control and agility. Lock was also solid defensively, his really beginning to remind me of Walker-Peters in his style of play.
– George Marsh: Impressive as ever, Marsh was commanding and composed at centre half.
– TJ Eyoma: Has been a key performer for the under 18’s this season, and Tuesdays game was no exception.
– Jonathan Dinzeyi: Had a terrific game, dealt with the Swansea forwards with ease.
– Samuel Shashoua: The creative driving force behind Spurs’ attacking performance, a leader on the pitch Shashoua was unlucky not to get more than one goal and it was probably his best game of the season.
– Jack Roles: A hard worker throughout, the intelligent Roles netted his twelfth goal of the season and the box to box midfielder was brimming with confidence.
– Reo Griffiths: Brilliant hold up play, Griffiths was powerful going forward and done everything but find the net, deserved a goal.
– Tashan Oakley-Boothe: Absolutely top class, the midfielder had an excellent game as he burst forward through the middle creating chance after chance.
– Keanan Bennett’s: A constant danger down the left Bennett’s had a fine game, getting the assist for Spurs’ fourth.
– Moroyin Omolabi: Did well when coming on, provided steel to the midfield.
– Jamie Reynolds: Decent display from Reynolds, very tidy when coming on.
– Juan Pablo Gonzalez-Velasco: Provided a spark when coming on and was very unlucky not to get on the score sheet.

My man of the match: Samuel Shashoua- The creative driving force behind Spurs’ attacking performance, a leader on the pitch Shashoua was unlucky not to get more than one goal and it was probably his best game of the season, and his had many a good game! There was a moment in the game when Shashoua beat two or three men before finding the space to shoot, his effort crashing against the crossbar, it was breathtaking play, Messiesque.