“We needed that win. It’s been a tough week, not the best and we wanted to come here, get the win and progress to the next round. It was a good performance. I thought we were solid all around the pitch and deserved to win.” (Harry Kane) 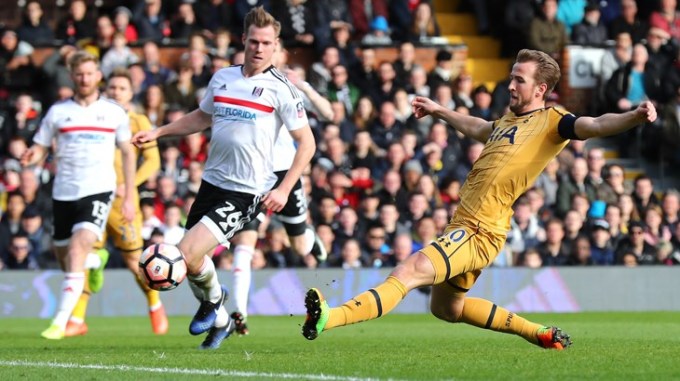 Spurs go marching in to the quarter finals of the FA cup, after Mauricio Pochettino’s side recorded a comprehensive 3-0 victory over Fulham on Sunday afternoon. Spurs shone at a sunlit Craven cottage, winning the game in style and after two straight defeats it was a relief to see a vintage Tottenham Hotspur performance. Harry Kane has a phenomenal goalscoring record against London clubs and his hat trick today, takes his tally to 19 for the season, and it was incredibly refreshing to see Pochettino field such a strong Tottenham lineup. Spurs begun the game with a confidence about their play, their fast attacking play soon having Fulham on the back foot. After Eriksen went close early on, Spurs were relentless and their intensity was rewarded 16 minutes into the game, when Eriksen sent a beautiful low cross in to the box, which Kane tapped home to give Spurs the early lead they had so desperately craved. Ten minutes later Eriksen almost turned scorer when Kane played him through in the box but Eriksen’s effort went high above the crossbar. Spurs flourished and they passed the ball around the field with ease, after Harry Winks had a goal ruled offside Spurs saw the half out with relative ease, with few meaningful attacks from the home side. Our style of play didn’t change in the second half and just six minutes in to the second period, Harry Kane grabbed his second of the game to double Spurs’ advantage. Eriksen was again the provider, the Dane picking out Kane with an excellent cross, and Kane made no mistake as he skilfully tapped the ball home, a perfect strikers finish. Moments later Dele Alli almost got our third, Eriksen so close to getting a hat-trick of assists as his precise cross was met by Alli at the far post. However, Alli was put off by the foot of Odoi, as he headed the ball over the crossbar. 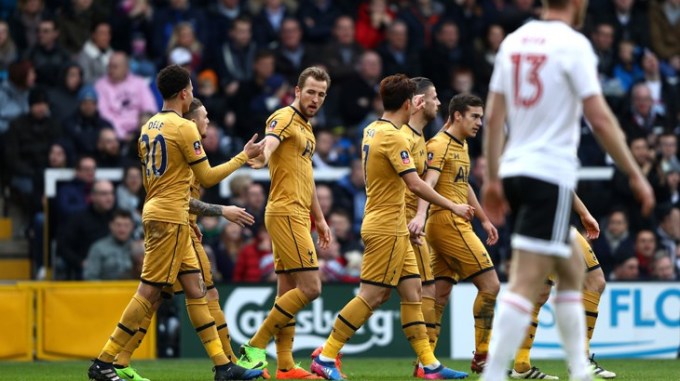 Fulham threatened us with a header from Kevin McDonald on 71 minutes, but our classy performance toppled the championship side after Kane got his hat-trick on 73 minutes to send Spurs into the quarterfinals of this most famous competition. Alli sent Kane racing through on goal after putting in a well measured pass, and Kane made no mistake as he fired the ball home to cap off a memorable afternoon on the banks of the river Thames. The final score Spurs 3-0 Fulham, a delightful result for Spurs as we go into the quarter finals with aplomb. Where we will meet fellow London side Millwall, in what will be our last ever cup match at the Lane. It’s a fantastic draw for Pochettino’s side and we’ll really fancy our chances against the league one club.

Player review:
– Michel Vorm: Had a quiet game making a few comfortable saves.
– Kieran Trippier: Filling in for Walker at right back, Trippier had a good game. Especially impressive going forward and was influential in the creation of the first goal.
– Toby Alderweireld: So calm and composed, a defensive performance to saviour.
– Jan Vertonghen: Returned from injury in style, bossing the defence.
– Ben Davies: A comfortable defensive performance from the Welsh left back.
– Victor Wanyama: A powerhouse in the centre of the park, overwhelmed the Fulham midfield.
– Harry Winks: Winks’ best performance in a Spurs shirt, Winks controlled the midfield his passing and movement absolutely top draw.
– Christian Eriksen: Vintage Christian Eriksen display, probably the most influential player on the pitch.
– Dele Alli: Consistent and effective, full of trickery. Also provided the assist for Kane’s third.
– Son: Played well on the wing, made some good contributions to the attack.
– Harry Kane: His hat-trick says it all.

My man of the match: Hat trick hero Harry Kane.