“It’s very disappointing that we didn’t seize the initiative in the first half when we should have done. We had ample opportunities to score goals and then just shot ourselves in the foot with the goals conceded. Fulham were excellent, they made themselves very compact and hard to break down, we tried to force the game and left ourselves vulnerable to the counter-attack, which they exploited.” (John McDermott) 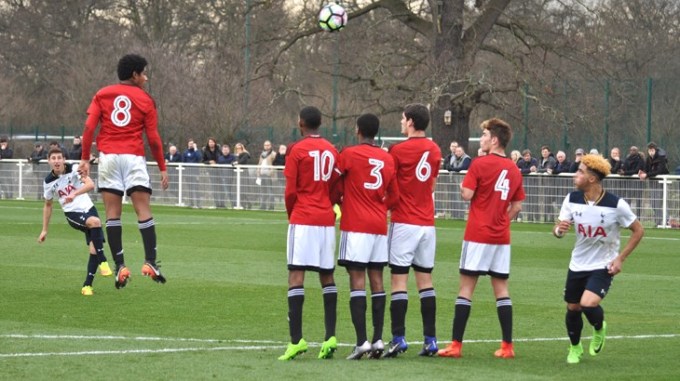 Our under 18’s fell to a disappointing 3-0 defeat against Fulham on Friday afternoon, to virtually diminish any chance of getting into tier one of the under 18 league. Having beaten Fulham 1-0 in the reverse fixture earlier on in the season, I really fancied the lads chances against Fulham and although the 3-0 scoreline suggests otherwise, I thought they could have recorded a comfortable victory based on their dominant first half display. We had command of the game from early on as we attacked the Fulham defence with great purpose, a wonderful one two played by Shashoua to Griffith’s ended with the former putting the ball in to the back of the net, only to be judged offside. 18 minutes in Spurs should have been one up, when Bennett’s played a nice one two with Griffith’s inside the area, only to see his close range effort go waywardly wide ofthe post. The cottagers were dangerous on the counter attack creating a few chances which Spurs’ defence dealt with appropriately. Just after the half hour mark Alfie Whiteman was forced into making a fine reaction save when he denied Michael Elstone’s effort from inside the box. Shortly afterwards Spurs went desperately close to breaking the deadlock,after Jack Roles showed brilliant technique to curl his free kick onto the inside of the post. With the rebound falling for Bennett’s but Fulham’s Ashby-Hammond got in front of the winger, and just moments later Griffiths hit the ball across the area and into the path of Bennett’s, but with just the goal gaping the Spurs man had unfortunately only managed to put the ball high over the crossbar. 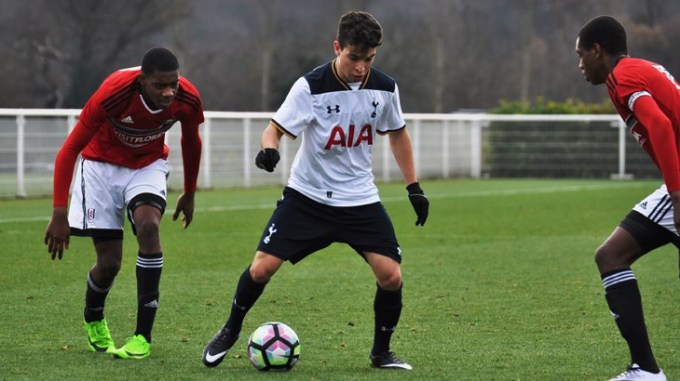 For all our domination in the first half Spurs were not to be rewarded for their hard labour, as shortly before the interval the visitors caught us on the counter attack and took the lead through a fortuitous goal. Fulham’s Harris whipped the ball into the area and the ball was scrambled past the line by Spurs defender Jaden Brown, after a spill from Whiteman. After Tashan Oakley-Boothe went off at half time, going into the second half we lacked that bit of creative spark from the midfield and despite creating a couple of decent chances early on, McDermott’s side soon fell further behind. When O’Riley curled a delicious effort from out wide, high into the top corner deceiving Whiteman and the whole Spurs defence. Fulham’s second was the killer blow, Spurs looked depleted, unable to deal with a Fulham side growing into the game by every passing minute. It was deeply frustrating, because Spurs were much the better side but they were simply unable to regain their composure. Spurs were struggling at the back, as Fulham bombarded us in our own penalty area, and just minutes after their second O’Riley almost scored a carbon copy of his first. The midfielder saw his free kick from out wide smash against the upright leaving Whiteman rooted to the spot.

Fulham’s attacking intensity didn’t cool in the following minutes, they produced numerous chances where they went close to extending their lead, Spurs had fell apart and looked a shadow of the side they have been for the most part of the season. With just two minutes remaining of normal time, the cottagers got their third of the game yet again catching us on the counter attack. Keeper Ashby Hammond threw the ball high over the Spurs defence and into the path of Thompson who rounded the rushing Whiteman to slot the ball into the back of the net, the final score Spurs 0-3 Fulham. A really disappointing result for the under 18’s, they haven’t enjoyed this month at all and yesterday’s match was no exception, they’ll feel as if they should have got something out of the game. The young Lillywhites will have to up their game for their visit of Newcastle United in the all important FA Youth cup quarter final at the end of the month. John McDermott’s side are in action again on Tuesday, when they face Swansea city at Hotspur way, I thought I’d add that the absent trio of Japhet Tanganga, Nick Tsaroulla and Kazaiah Sterling were all training with the under 23’s and could all be involved in Mondays PL2 match against Sunderland.

Player review:
– Alfie Whiteman: A rare off day for Whiteman, his first half mistake lead to the opener for the visitors. However, Whiteman did produce some fine saves and wasn’t at fault for the other two goals.
– Matt Lock: An impressive display from the right back, Lock has really good agility and ball control, and looked good going forward.
– Jaden Brown: Although he doesn’t attack down the wing like Tsaroulla, Brown had a good game at left back and was decent defensively.
– Oliver Skipp: My man of the match Skipp had a fantastic game, see below.
– Jonathan Dinzeyi: Wasn’t up to his usual standards on Friday, although he was dominate in the air he struggled at the back, and he wasn’t as composed as he is when paired up with Tanganga.
– George Marsh: Filling in at centre half Marsh was superb, as tenacious as ever he got stuck in on multiple occasions and his defensive wit also impressed McDermott who said: “George Marsh really stood out. He reads the game really well and whatever job you give him, he does it diligently, aggressively and I also think he did it with a lot of football intelligence today.”
– Samuel Shashoua: Had a good game and was unlucky not to get on the score sheet, made some lovely runs and worked an opening on a couple of occasions. However, he was at times quite isolated on the left.
– Tashan Oakley-Boothe: He only played the first half but I thought the midfielder had a good game he provided a creative spark from the midfield and I was surprised when he was taken off at halftime, although it may well have been due to an injury.
– Dylan Duncan: Coming on at half time in place of Oakley-Boothe, Duncan made a decent impact on the game, he brought an attacking flair to the midfield.
– Reo Griffiths: Wasn’t to be his day against Fulham, despite working his socks off, his hard work and good movement was not rewarded.
– Jack Roles: Had a decent game, his excellent first half free kick came so close to putting Spurs ahead.
– Jamie Bowden: The under 16 made his first appearance for the under 18’s and the highly rated midfielder looked quite good when coming on, definitely one to watch over the coming seasons.
– Keanan Bennett’s: A frustrating day for Bennett’s as he’ll feel that he should have gotten on the score sheet. The winger brought plenty of energy to the match and put some nice crosses into the box. However, he wasn’t clinical enough in front of goal.

My man of the match: Oliver Skipp, who had an excellent game against Fulham Skipp was very efficient in the centre of the park breaking up play and mopping up with great effect. Skipp who is still and under 16, is such an astute player and he looked years ahead of his game. 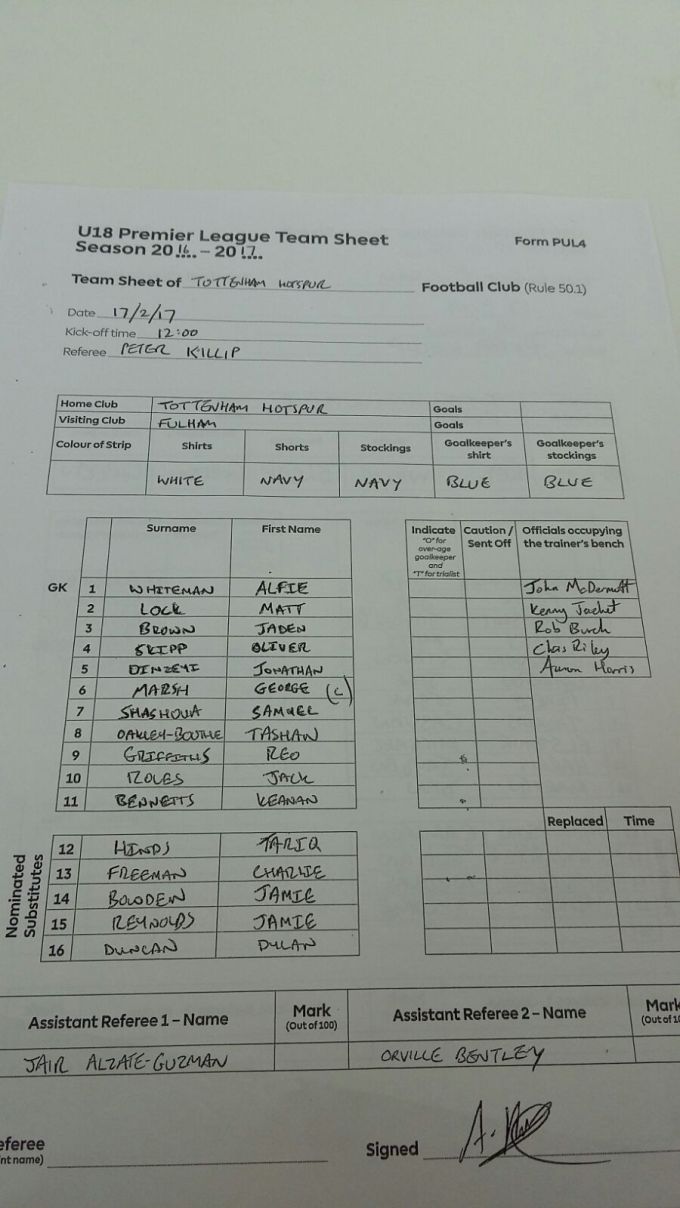