It was a match to savour for us Spurs fans, as Mauricio Pochettino’s resilient Spurs side came back from a goal down to thrash Southampton 4-1 at St Mary’s, on Wednesday night. The game had everything, excitement, goals and most importantly the lads first win on the road in 8 matches, as the Lillywhites closed the gap on fourth placed Arsenal to one point. It was a lively game throughout and it didn’t take long until the deadlock was broken, with Spurs disastrously falling behind to the home side two minutes into the first half. After Wanyama committed a foul deep in Spurs’s half, James Ward-Prowse found Van Dijk with a good cross, and the tall Dutch centre back capitalised on some poor defending to power the ball past the helpless
Lloris and into the back of the net. Southampton started the first ten minutes the much better side, their high pressing style of play caused the lads much trouble. On 16 minutes the saints almost doubled their advantage, after Nathan Redmond drove a powerful low shot towards the bottom left, with his shot darting wide of the left post. However, Spurs drew level just three minutes later through Dele Alli. Alli got on the end of Sissoko’s deflected cross, to put Spurs level with a great header. Alli’s header dipped into the top right hand corner of the net, Forster had no chance.

We really began to find our rhythm in the minutes that followed Alli’s equaliser and the lads were in control of the game seeming the most likely to score the next goal and that goal almost came in the 43rd minute, after a skilful Wanyama jinked past Van Dijk in the penalty area. The Kenyan midfielder went to shoot at goal from close range but the experienced Jose Fonte was there to make a last ditch challenge. We started the second half with great attacking intent, and Pochettino’s team were rewarded when on 52 minutes Harry Kane sent the travelling Spurs fans roaring with delight, as Kane made it 2-1 to Spurs netting his ninth goal of the season. The goal came about after Eriksen whipped the ball into the box from the resulting corner and Kane took advantage of the sluggish Southampton defence, to head the ball emphatically into the back of the net. Just four minutes later the game got even better for Spurs as they were awarded a penalty after Nathan Redmond brought Alli down inside the area and the Southampton forward was shown a straight red card from Mike Dean. Kane stepped up only to blast the ball over the cross bar, but Kane’s miss was in fact down to the pitch itself, just as he was about to hit the ball it bobbled up leaving Kane helpless in his effort. It was all Spurs in the resulting minutes as the lads showed their superiority over ten men Southampton, on 71 minutes Eriksen came desperately close to wrapping the game up for Spurs. Eriksen’s well struck effort on the edge of the penalty area thumping the cross bar.

Dele Alli: "It's never nice to concede early but we didn't panic and stuck to our gameplan. It was a good game and a big statement" #SOUTTOT pic.twitter.com/fEdqZScSj2

Spurs needed that third goal and it never seemed in doubt, with the newly introduced Son getting on the score sheet in the 85th minute. After Eriksen’s deflected pass found Son on the left wing, the South Korea International surged forward before rifling a low shot which with wonderful precision nestled into the bottom right of the net. Two minutes later Spurs capped off an excellent display with a fourth after Dele Alli got his second of the game. After some superb work from Rose, the left back played through Alli on the left side of the box as he calmly side footed the ball into the back of the net with a fine finish. The final score, Spurs 4-1 Southampton. COYS 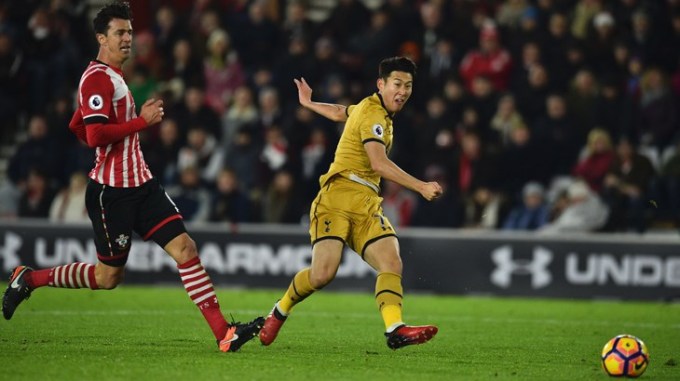 If there's any @NFL teams looking for a kicker in the future, have a look at my game tonight! 😉 #SOUTOT

It was a wonderful performance from Spurs on the south coast, we played some beautiful football and we got those important three points putting us on a high ahead of Sunday’s visit of Watford. Dele Alli stole the show with his excellent performance scoring two goals on the night, Eriksen also had a big influence on the game assisting two goals, whilst Moussa Sissoko put in a superb shift on the right wing. Left back Danny Rose was outstanding on Wednesday night, both defensively and offensively. Rose assisted Alli’s second goal, whilst the England international won 100% of his tackles and aerial duels.

No player under the age of 23 in Europe's top 5 leagues has scored more goals (16) than Dele Alli since the start of last season. pic.twitter.com/vbe1wZac2i

My man of the match: Dele Alli, I predicted in my preview that Alli could be the difference against the Saints, and the 20 year old exceeded expectations scoring two important goals. Dele played exceptionally well and demonstrated yet again his enormous potential and sheer class for a man of only 20 years of age.