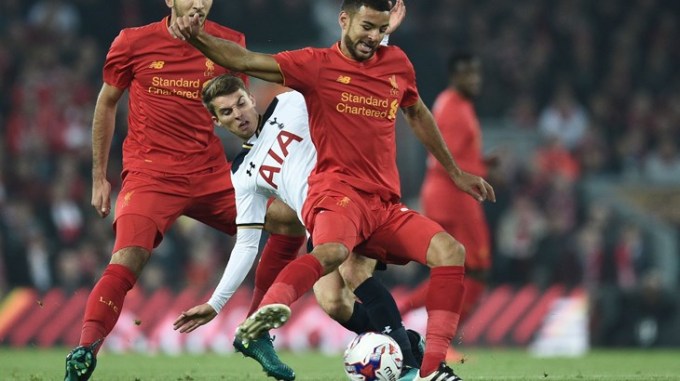 Spurs were knocked out of the EFL cup on Tuesday night by Liverpool at Anfield as the reds defeated our young side 2-1. It was an entertaining cup tie as Mauricio Pochettino’s second string squad battled hard against a tough Liverpool side. The home side started the game well as they went forward at every opportunity, Jurgen Klopp’s side took a somewhat fortuitous lead in the ninth minute, after Nkoudou slipped just outside the box Marko Grujic capitalised and hit a deflected effort at goal which fell into the path of Sturbridge who prodded the ball into the back of the net despite Vorm’s best efforts, it seemed as if Vorm also slipped whilst attempting to deny Sturridge. Liverpool continued to attack and shortly afterwards Sturridge almost doubled the reds lead, after being found free in the box the England international hit a weak effort which went straight into the hands of Michel Vorm. After struggling in the opening 20 minutes Spurs went close to equalising at the other end after Janssen narrowly headed over after meeting Trippier’s cross at the back post.

Liverpool didn’t alter their style of play in the second half and just over ten minutes in Vorm was forced into making an excellent save as he denied Divorck Origi’s powerful effort with a strong hand. Shortly after the hour mark Liverpool doubled their lead with Daniel Sturridge’s second goal of the game, after being played through by Wijnaldum, Sturridge slotted a composed finish past Vorm and into the back of the net. Since Erik Lamela’s introduction Spurs’s attack was bolstered by the Argentines creativity and on 76 minutes Lamela won a penalty after being tripped by Lucas in the penalty area. Up stepped Janssen who converted his penalty with a fine finish to get his second goal for Spurs. Shortly after Liverpool almost put the game out of sight after Sturridge’s curling effort was deflected on to the cross bar. With two minutes remaining Erik Lamela found debutant Shayon Harrison with a wonderful pass however, Harrison couldn’t chest the ball down in time as Mignolet gathered the ball from his feet, the final score Spurs 1-2 Liverpool.

Michel Vorm was excellent in between the sticks, Vorm made a string of top class saves to deny the reds. I thought that goalscorer Vincent Janssen had a terrific game up front apart from despatching his penalty with nerves of steel, Janssen worked incredibly hard throughout the match working tirelessly to get in to goalscoring positions. In addition the Netherlands international showcased great courage and physicality causing the Liverpool defenders bother throughout the match. Erik Lamela made a big impact on the game since coming on in the second half, Lamela’s creativity and class shone throughout, winning Spurs’s penalty Lamela was incredibly effective behind Janssen and his brilliant pass late on almost saw Harrison get a dramatic late equaliser. As much as I understand and respect Pochettino’s decision to rest many players I still thought Pochettino fielded too weak a squad against Klopp’s side. I felt as if we had put just one more regular in the lineup then I believe that we would have progressed to the quarter finals. However, a win against Leicester on Saturday would erase Spurs fans disappointment suffered in midweek.

My man of the match: Michel Vorm, The Dutchman made a string of top class saves to deny the reds from winning with a greater goal margin.